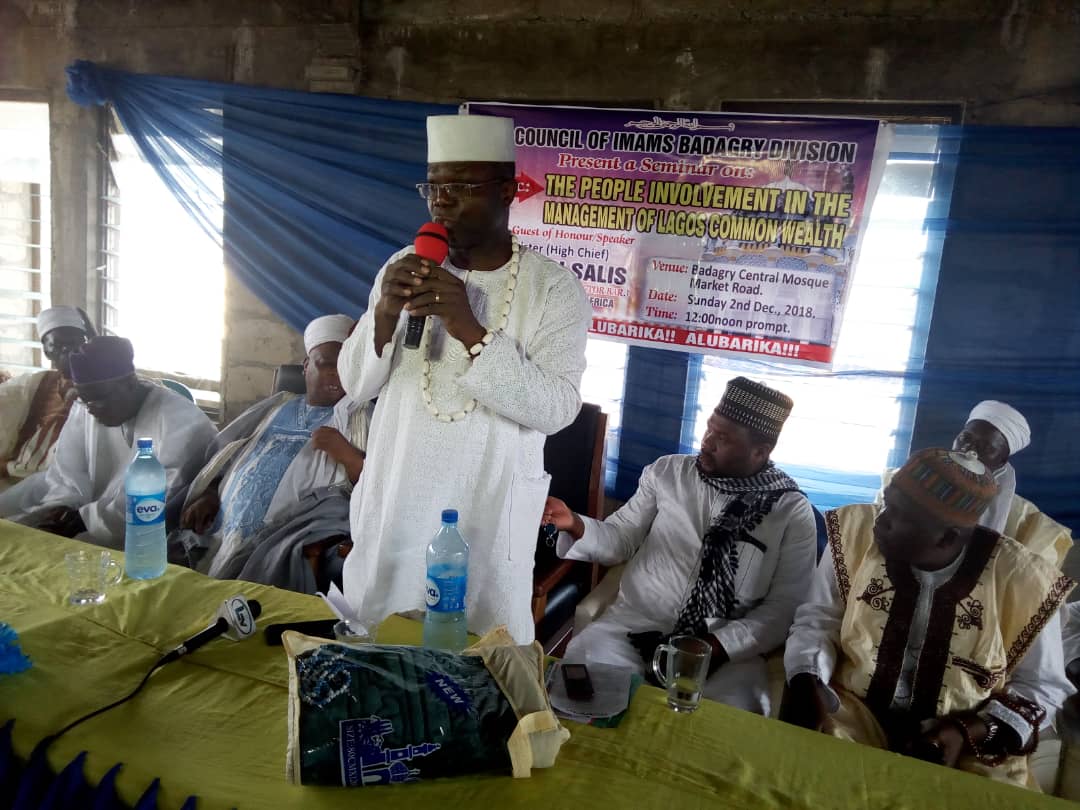 The Alliance for Democracy governorship candidate, High Chief Owolabi Salis has said that Lagos state needs a governor whose loyalty is to the people and not the political party or an individual.

Chief Salis said thison Sunday, December 5, 2018, when the council of Imams, Badagry division hostedhim in a symposium where he spoke on “the people’s involvement in themanagement of the commonwealth of Lagos.

Popularly referred to as ‘oba mekunnu’ meaning king of the masses, Chief Salis revealed that should he emerge as the next governor of Lagos, his focus would be to bridge the gap between the rich and the poor by providing basic needs of life like job, housing, education and involvement of the people in the system of governance.

The man behind Salis foundation, which has empowered over 53, 000 youths across the state revealed how passionate he is about ensuring a better livelihood for all delivering his paper on the topic.

He said “I’m here to let the people know that the time has come for them to choose wisely, to let them know I’m contesting for the masses and that I want to be next governor of Lagos state. My slogan is ‘Eko a tu wa lara’ meaning Lagos will be comfortable for us all because I have the people in mind and the governance of the state will be centred around them. I’m also here to bridge the gap between the rich and the poor.

“I’m also here to meet with the religious leaders so that they can pray for the people to be free from slavery. We also want to set up a ward executive council and bring governance to the people. It’s a way of getting closer to the people and getting them involved in what is happening. It is going to involve a minimum of 50 members who will be paid with government funds. One of them will also be elected as the ward governor who will meet with the state governor every week to discuss the issues and progress in each ward. That’s the best way to get them involved.

“We are also going to introduce an enterprise system, a system designed to make members work, do something that will fetch them financial gains and reduce their reliance on the government for livelihood. We are going to increase and improve on our skills acquisition programmes. Our people are smart, they have good brains but they need a platform to express themselves.

“All the money meant to be used to develop the society are being pocketed by some people, this is going to stop. We have to give it back to the people and that’s what I’m going to do.”

Speaking with newsmen on his plans for Badagry if he eventually becomes the next governor of Lagos state, Chief Salis said “ the Badagry roads, starting from Mile 2 down to Badagry, the road is so bad, I am going to fix it. I will also look into the potentials in tourism in Badagry division because this community is very historic,  it will also be spread across other areas like Amuwo-Odofin, Ojo and other places that have been so historic but neglected.

“There have also been a lot of contractual frauds that we have to look into. The projects in some of these communities have been awarded several times revealed how but none has been completed. They take the money and yet leave the job undone, nothing has been done to these but I will address it.

Chief Salis further displayed his knowledge of Lagos by revealing that despite being based in New York, he travels to Lagos very regularly and visits some of these localities and that’s why he has been able to pint out the challenges in most communities.

“I know Lagos very well because I hailed from Ikorodu, I schooled in Lagos, had my degrees in Lagos before relocating but I visit Lagos very, very frequently. In fact, I visit Lagos every week, I have networks across the state and we relate very well. With the kind of intellectuals I’m surrounded with so I’m a full fledged Lagosian.

He also responded to the workability of his bottom-top system by saying that it is the only way to stop contractual fraud. “It is a system that is being practiced all over the world. I’m going to do it as well because it has been proven possible in other places. It is a way of giving power to the people, making them involved in the management of their resources.

“My advice for Lagosians is to shun people who will come to buy their votes, they’ve been doing it, collecting money in exchange for their PVCs but I want to encourage everybody to stand by his votes, monitor it and make sure it counts. Vote for the right people so that you can enjoy good and participatory governance where you will have a say. Vote for the people who are loyal to you and not those who are serving their pockets and their godfathers.”

Glamour was added to the event when Chief Salis presented prayer mats to the Chief Imam of the Council of Imams, Badagry division, Sheik Abdulakeem Ishola Akeusola and encouraged the Islamic clerics to continue their prayers for the emancipation of Lagosians who are under systemic slavery.