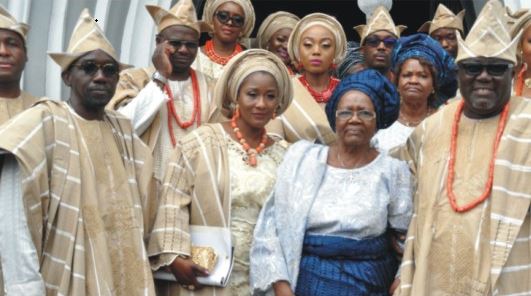 •Details Of The 4-Day Event

It was a 4-day event, which attracted dignitaries from all walks of life who gathered to honour the children and family of Doherty as they celebrated the life and times of their father, the late Dr. Juilius Adetunji Doherty, who passed on to glory at the age of 84. The 4-day event started on Tuesday, 6th February, in Ibadan with service of songs and ended in Lagos with a grand reception party on 8th February, while outing service was held on Sunday, 11th February 2018. City People’s Society Editor, TAYO FAJORIN OYEDIJI, and reporter, ADEOTAN OSUNYOSADE were there.
ABOUT THE 4-DAY EVENT

Pa JuiliusAdetunji Doherty’s journey to the mother earth started on Tuesday, February 6th, with a service of songs at PentoriseEvent Centre, Bodija, Ibadan. It was followed by a commendation service on Wednesday, 7th February, at All Saints Church, Jericho also in Ibadan. The train later moved to Lagos on the same day for a wake service and night of songs at 10 Degrees Event Centre, Ikeja. On Thursday,8th February, His funeral service was held at the Cathedral Church of Christ Church, Marina, Lagos and he was interred at Ikoyi Cementry, Lagos. It was followed by a grand reception at 10 Degrees Event Centre and an outing service on Sunday, 11th February, at Cathedral church of Christ, Marina Lagos. All the events were well attended by family members, friends and well-wishers.

PAPA’S CHILDREN ALL Stand OUT
It is not only honourable when you have children, but more fulfilling when you have successful ones. Pa Julius had children and they are all successful. They were the hosts at the 4-day events and they made sure their father was given a befitting burial. The children are: Adetunji Doherty, Adedeji Doherty, Abiola Animashaun, Adedayo Doherty, Adetutu Babalola,Yinka Doherty, Deborah Durojaiye, Wole Doherty, AdepejuOwodele, Akinwunmi Doherty and Toyin Doherty. All their guests stood out and shared in their joy of a successful burial for their father.

OONI OF IFE HONOURS DEJI DOHERTY
The paramont ruler of Ile Ife, Oba Adeyeye Ogunwusi, is one of the close friends of one of the deceased’s son events, Deji Doherty. The Oba was not at the party for that day, but sent his delegate in the person of Oba Adedini, the Elegesi of Ile Ife Not only was the delegate there, Kabiyesi’s 3 pretty sisters were also not left out. They enjoyed themselves all through.

DOHERTY FAMILY AND DESCENDANTS STORM LAGOS
It will not surprise you that majority of the prominent Doherty family stormed Lagos from different countries where they are domiciled to pay their last respect to the Late Julius Doherty. Sighted among many in hundreds were the scion of the Doherty family, Chief Bode Debayo Doherty, Chief Fatai Doherty, Dipo Doherty, Engr. Segun Doherty, their wives and many others.

DO YOU KNOW THE OLAKUNRIN AND DOHERTY ARE RELATIONS?
When the Nigerian first woman accountant,Toyin Olakunrin, was sighted, she was almost not easily recognised because she was looking younger than 80. Not only that she was a guests at the burial, she is a member of Doherty family. Her mother was nee Doherty before she married Olakunrin, no wonder she was present at all the Lagos events.

OLD BOYS OF KINGS COLLEGE AND CMS PRESENT
The Late Pa Julius Doherty is a grammarian and also one of the old boys of King’s College. You can, therefore, be sure of a large turn out of the old students who attended any of these prestigious high schools in Lagos, at Pa Doherty’ burial. Old boys were at the burial and not only were they there to honour the Late Pa Doherty, the King’s College Old Boys also went to honour Dayo Doherty, one of papa’s children. CMS old boys were led by one of the oldest ex-boys of the school, Chief Ayo Adebanjo, who was a classmate of the deceased. Among the several old boys were property merchant, Olabode Ajetumobi, Engineer TundeOlaleye, Barr Dipo Sobowale, Engineer Adeolu Oyenusi, Otunba Dele Babalola, Rotimi Fagbanwo, Taiwo Oyafemi, Ayo Akindahunsi, Andy Ndukwe, Osibodu Abimbola, Oye Oyefeso, Lanre Bakare, Ayo Agbesanwa,Kunle Lediju among others.

OTUNBA GBENGA DANIEL STORMS THE CHURCH SERVICE
The former governor of Ogun State, Otunba Gbenga Daniel, was at the church. He is one of the PDP’s Stalwarts, the party, that a son of the deceased, Deji Party, belongs. He led other members of the party from Ogun State to pay condolence visit to the Dohertys.

PDP LEADERS AND STALWARTS TROOP OUT
For Deji Doherty, a former PDP Guber aspirant in Lagos and boss of 10 Degrees Event Centres in Lagos, it was a payback time for him. He had the largest crowd and many dignatries from all walks of life came to celebrate the life and times of his late father with him. Most especially leaders, stalwarts and numerous members of his party, PDP. Among many were Senator Buruji Kashamu, former Guber aspirant, Ade Dosunmu, PDP, member, Iyaloja of Oja Oba, Lagos,PDP Women Leader, Mrs. Susan, Hon Dipo Olorunrinu, PDP Member, House of Assembly, Lagos and many others. Deji and his wife, Abiola, stole the show at his father’s burial owing to the magnitude of crowd he pooled. He is very connected within the corridors of power, owning to his top post in the Lagos PDP.

NORDICA BOSS, DR ABAYOMI AJAYI AND WIFE PARTY
Popular Lagos couple, who puts smiles on the faces of waiting couples in Lagos, Nordica Boss, Dr.Abayomi and his pretty wife, Tola, were also at the party. They were not only guests as they share a strong friendship with one of the deceased’s son,he is also one of the old boys of CMS Grammar School. They had fun at the party and dined with one of their family’s friends, Pastor Jide Daniel and wife.

TITI OSENI& HUSBAND
Blessed with a lovely physique and good looks to go with it, Ogun’s first female former speaker, Titi Oseni, is one of our favorite socialites in recent times. She was at the burial with her husband, Wale Gomez and they were engaged in a tete-a-tete all through. The former speaker looked beautiful in her purple Ankara aso ebi. They sat on the same table with Ovation Boss, Chief Dele Momodu and Retired AIG, Alapinni.

2 MUSIC LEGENDS – ONE STAGE
When you are highly powerful and connected, then you can contract 2 biggest juju musician in Nigeria for your father’s burial. The burial had the grandmaster, Chief Ebenezer Obey and King of the world beat, King sunny Ade on bandstand. Chief Ebenezer Obey performed at the Wake and night of songs, while King Sunny Ade thrilled guests on Thursday at the grand burial reception.

60 IS THE NEW 80 FOR FOLAKE SOLANKE
The woman of many first, Chief (Mrs) Folake Solanke, was at the burial. She is not your regular owambe person because she is a corporate person. The first lady SAN, who is 85 years old does not look her age at all. She looked far younger than 80. She was looking agile, healthy, walking unguarded and still beautiful for her age. No sign of aging at all. Known as a powerful dresser, her love for skirt suits did not go unnoticed when she was seen wearing one of her high end luxury premium designers with a black sash to complement it.

THE RECEPTION
The hall was given a classy look. The hall was beautifully decorated in purple with a touch of gold. The hall was fully decorated from ceiling coverage to chandeliers that provided the moonlights that gave the hall a relaxed atmosphere. The tables had lovely vases on them and name tags making it easier for guests to locate their tables. It was a beautiful sight to behold.
USHERS: Right from the hall entrance, guests were given a friendly welcome by beautiful ushers. The ushers, who were gorgeously dressed in Gold attire, attended to guests in a very accommodating manner. Everybody was well attended to

OVER 4 ASOEBI
Though, the official colour of the day was purple, but guests had on more than 4 different Ankara patterns and colours. Apart from the main purple and orange Ankara, other colours/patterns like blue, gold,…… were spotted by family members and friends.

TRADITIONAL FEMALE DANCERS
The ceremony started with a troupe of traditional Edo dancers. They majestically danced their way in, entertaining seated guests as they all sang in unison. They were beautifully clad in the Edo red velvet wrappers and coral beads.

EYE CATCHING ENTRANCE
A pictorial display of the late DR. Julius Adetunji Doherty’s photograhs was at the entrance of the hall. Several photographs of the deceased were displayed, showing different stages of his life. There was a green carpet and back drop of Dr Julius’s pictures, many guests posed at the corner to take pgotographs. There was also a small white board with names and signatures of those who attended the ceremony.

MEET LATE PA JULIUS, A Renowned DOCTOR
The late Dr Julius Adetunji Doherty lived a glorious life.He was given a befitting burial and his life and times were well celebrated. He was born 84 years ago and he died in October, 2017. Born in Onitsha, he had his primary and secondary education in Ibadan. The famous CMS grammar school,he was also in the King’s College, Lagos, he proceeded to Medical School and did his housemanship in England.He worked at Ijebu Ode General hospital as a rural medical officer. He later proceeded to Queens Hospital in Ireland for a post graduate course in Obstetrics and Gynaecology and qualified as a member of the Royal College of Obstetrics and Gynaecologists, England.He returned to Adeoyo State Hospital in Ibadan as a specialist, obstetrician and gynaecologist. He was known for his hard work and made his mark as an astute surgeon. He set up his private practice, Banuso Specialist Hospital, Ekotedo in Ibadan in 1971 named after his favourite racing horse. He got married in 1960 to his childhood sweetheart, Miss Elizabeth Ewusu Osho, at the Baptist Church, Edmonton in London and the union was blessed with many children and grandchildren.

WHY MAMA WILL MISS HER HUSBAND OF 57 YEARS
The late Pa Juilius death would not have hit anybody more than his wife, Elizabeth Ewusu Doherty, who has lived with him for 57 years. It was such a long years before papa finally succumbed to death.Though not devastated rather she was grateful for her husband’s well-lived life. She was at all the funeral services and looked calm in the midst of all her children and grandchildren. She wrote a glowing tribute” our journey was like a fairy tale ending happily ever after. This was between a girl guide of Methodist Girls High School and boys scout of the CMS Grammar School. Dr. Juilus Adetunji Doherty, my friend, my lover and darling husband was quite loving and kind. Thank you darling for protecting me as much as you could. The ring remained intact and the vows accomplished. Adieu my darling, may God grant you eternal rest.