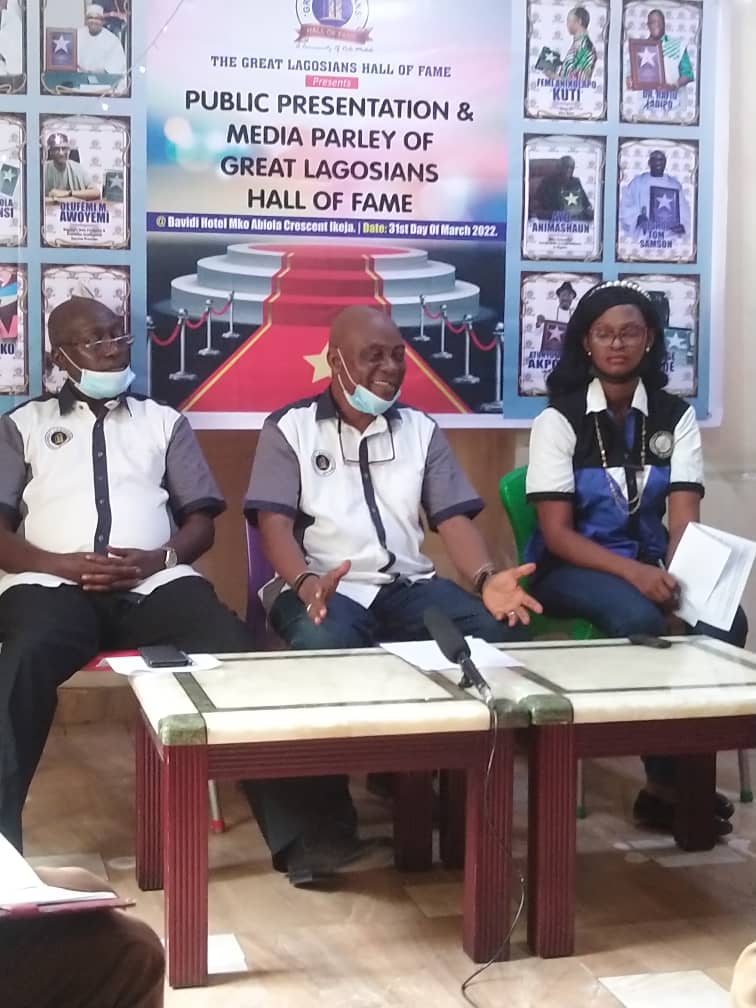 Without mincing words, Lagos is the only truly urban in West Africa and the most cosmopolitan city in sub-Sahara Africa that welcomes everyone without saying no.

Great Lagosians Hall Of Fame remains a project someone can easily refer to as a child of necessity said was borne out of the need in order to reshape a whole city and most especially melting pot of some sort undergoing the worst of decadent paralysis, haven’t understudied the mindset of majority of our youths, tomorrow’s leaders as they called, this targeted at short term means of achieving success at all cost.

Seeing this act of cankerworm ravaging the hearts of our youths, the entire crew of ‘Great Lagosians Hall Of Fame decided to single out people domiciled in the city Lagos, who by dint of hard-work had excelled in their own chosen career/fields of human endeavours as our mission and adventure, is basically to showcase their adorable profiles, veritable evidences of proven capacity and tenacity of purpose to the generality of the people as a role models.

Haven’t said this, the Great Lagosians Hall Of Fame would been targeting those who quietly crept into Lagos unnoticed but who are catapulted onto reference by outlandish success propelled by hard and smart work because as a group we don’t believe in epitaphs as we intend to celebrate them while they’re alive.

The bitter truth is that introduction into the Great Lagosians Hall Of Fame is carried out by a resource team of Academicians, Journalists, Historians, Entertainment gurus and public Relations practitioners, from the onset, the parameters are simply merit based which can never be sale while on this same mindset we set out in 2021 to embarked on a journey of identifying and showcasing the Icons of Lagos City.

Great Lagosians Hall of fame induction starts by uploading of profiles on the virtual and respected website www.greatlagosians.com

Prior to this, there would be a followed up by the presentation of the ‘plaques of fame’ to the individual inductee at his or her reputable home while the third and final stage is the ‘Inductees Banquet where inductees and their families, friends would be treated to hilarious merriment in banquet style. As the high point of the event basically on Walk Of Fame.

After each inductee might have completed this Walk Of Fame, he or she will then joins fellow inductees to take a group photography that would signifying the induction as completed thereafter they will now go back to join friends and we’ll wishers on the different banquet tables.

In respect of this, the founding president, Olawale Enitan Seriki has set aside a compendium of City Builders and achievers book launch tagged “Icons Of Lagos” the book was said to have been published by the Great Lagosians Hall Of Fame as it been concluded to be launched at the inductees Banquet.

Lastly, a complex have been carefully designed for the Great Lagosians Hall Of Fame at the proposed edifice, also there would be a Marble Wall where the names of inducted Lagosians engraved by year and class of induction.

We shall be hosting twelve dignitaries who happened to be our Hall Of Fam as we look forward to seeing everyone on Thursday twenty-sixth of may twenty-twenty two at the Orchid-Labtana Hall, Eko Hotel and Suite, Victoria Island.

15 Key Steps Developers Must Take Before Building In LAGOS