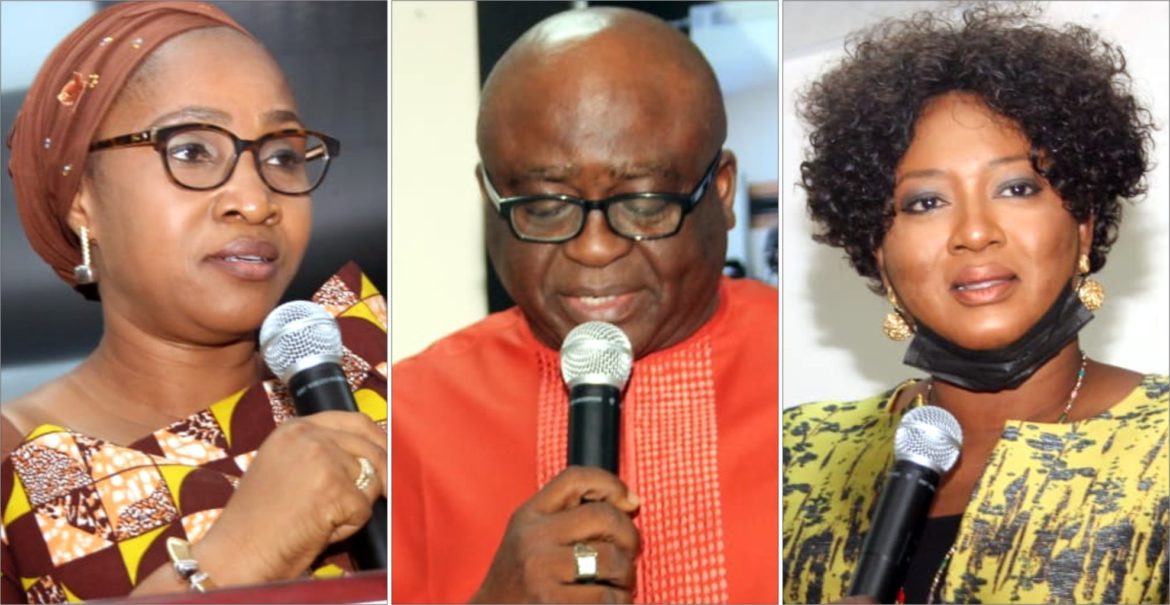 •Asks Them To Produce Quality Contents

There is has scarcely been an opportunity for all the factions and caucuses in both the English and Yoruba movie producing sectors, as well as movie marketers, scriptwriters, producers, directors, musicians and other content creators to gather under one roof to discuss how to create quality contents that can aid sustainable development in the country.

On Tuesday, August 31, 2021, the Lagos State Film and Video Censors Board (LSFVCB) under the leadership of its Executive Secretary, Adebukola Agbaminoja, made this possible, as notable names and faces in the creative industry came together to have a very important discussion and also reached a reasonable conclusion on behalf of the industry, the youths and Lagos State at large.

It is common knowledge that Nigeria is the third largest audio-visual content creating nation in the world after Hollywood in the USA and Bollywood in India, it is also common knowledge that many of these content are not only properly classified, they are also not adequately censored simply because there are other spaces like the social media where the government has little or no control over. Therefore, the Lagos state government decided to take the bull by the horn.

City People’s Brand Editor, DAMILARE SALAMI 08155134152 was at the entertaining and enlightening conference and in this report, he brings you the details of all that went down, enjoy.

The sight of veteran movies stars and content producers like Prof Sola Fosudo, Adebayo Salami (Oga Bello) Adewale Elesho, Executive Secretary, Mrs Anthonia Oredipe, Chairman Audio-Visual Rights Society of Nigeria, Cultural Administrator/ Film and Media Specialist; Dr. Shaibu Husseini, Veteran Singer, Kenny Saint-Brown, Mr Femi Odugbemi, Director, Multichoice Talent Factory, Victor Okhai, President of the Directors Guild of Nigeria, popular comedian Abiodun Ayoyinka aka Papa Ajasco and a host of other content creators excited many other attendees of the conference. They were among the early birds and added value to the meeting. Many of them spoke extensively on how to improve content creation and also took home some ideas that would be useful in their next projects.

Mrs Adebukola Agbanimoja, the Executive Secretary of the Lagos State Film and Video Censors Board (LSFVCB) started the event with a welcome address. In her speech, she revealed that the conference was organised pursuant to the State Government’s commitment to repositioning the entertainment sector to fulfil its potential as a primary revenue generator and employer of creative talents. She explained that the forum will facilitate the positive collaboration of all stakeholders to chart a way forward for the industry, adding that it is vital for the Film and Video Industry to support the efforts of the present administration in the tourism and entertainment sector.

In her words, “Lagos State Government is committed to utilising Creative Arts of which Film and Video are germane as a tool for economic growth and development in the State.  We, therefore, must project contents that mirror our desired goals”.

Pharm. Mrs Uzamat Akinbile-Yusuf is the commissioner for tourism, arts and culture, a ministry that also houses the LSFVCB. She delivered a keynote address at the event. In her speech, she revealed that the entertainment industry is one of the five pillars upon which Governor Sanwo-Olu has hinged his developmental programme for the state. According to this young and vibrant lady, the creative industry has the capacity to take many youths off the street and keep them gainfully employed.

“It is noteworthy to say that obscenity, vulgar languages, scenes of excessive violence and negative African stereotypes seem to be the order of the day which forms a major platform of societal degradation, thus; the need to come together and agree on ways best to eliminate such dysfunctional contents and exhibit positive values for a better society. Evidently, Content Development, a process of originating and maintaining content in order to provide knowledgeable fillings to the generality of the people has taken a notable percentage in the scheme of things globally and we cannot afford to lay back, leave anything to chance or shrink in our responsibilities to harness the all-inclusive possibilities of propelling and encouraging its full integration.

The Theme of today’s event “Content Development as a Driver For Sustainable Growth in the Film And Video Industry” is a step in the right direction considering the State Government contributions to the industry which aims at shaping and reshaping societal conducts and values; thereby, building a formidable and productive system that can favourably compete with many of its kind, globally, in view of the present shift towards a universal acceptance of the Film Industry”, she said.

The vent wasn’t just all talking, it was also entertaining. Right from the entrance, cultural singers, dancers and drummers entertained incoming guests to the event with cultural tunes and beats. Who says Lagos is not rich in arts and culture? These entertainers proved doubters wrong with their performances. They also thrilled with a play-let that focused on the importance of avoiding obscenity and vulgar language in our content. In all, this troupe entertained the guests quite well.

Prof Sola Fosudo is not a new face on the screen in Nigeria and beyond. He is a veteran actor who has made an impact in both the English and Yoruba sectors of Nollywood. He is not just an actor; he is equally a teacher, researcher and currently heads the Department of Theatre Arts & Music at the Lagos State University (LASU). In his paper titled ‘Content as a driver for sustainable growth in the film and video industry, Prof Fosudo revealed that the reason we have evergreen movies and music is the quality of such content. He further stressed that content creators can improve if they deviate from copying a job that has already been done because it makes a mess of the real job and focuses on deep thinking and research because contents are everywhere but content creators are most times too lazy to research their objects.

“Good content is the soul of the film industry anywhere in the world. It is the quality of content that comes from a film industry that makes it popular or that relegates it to obscurity. Without a shadow of a doubt, Hollywood is the biggest and most popular film industry in the world and this status has been built over many years of brilliance and innovation. In a world where humanity is constantly hungry for fresh ideas and innovation, audiences around the world would probably subscribe for creative content from countries other than their own, as long as the foreign content keeps giving them the breath-taking attraction and the brilliance they demand in quality”, he said.

The heart of the meeting was to drive home the fact that there is a need to make content creators reduce obscenity, use of vulgar languages and other NTTB contents in our media and uphold a high level of professionalism and encourage creativity and effective productivity in the industry. The panel discussion was led by a veteran actor who has gone ahead to make a name for himself in the industry and has also become a great content creator. Mr Mohammed Alli-Balogun who moderated the panel discussion had other high-ranking discussants in his panel. They include Mr. Femi Odugbemi, Founder/CEO, Zuri24 Media Lagos; Dr. Shaibu Husseini, Cultural Administrator, Film and Media Specialist and Mrs. Anthonia Oredipe, of the Directorate of Citizens’ Right, Lagos State Ministry of Justice.