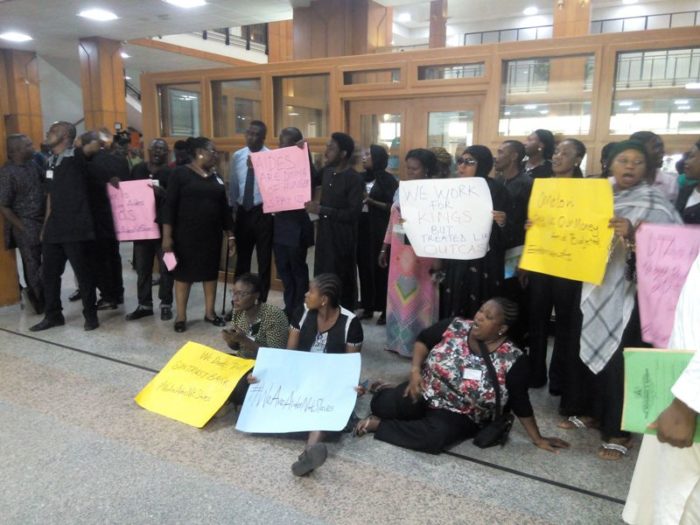 Some legislative aides to federal lawmakers on Thursday staged a peaceful protest to demand unpaid allowances.

The aides positioned themselves in the complex, at the lobby between both chambers of the National Assembly, as they held up placards with inscriptions, “we are aides, not slaves”, “it is a grievous sin to deny workers of their wages.”

An aide to a Bayelsa lawmaker in the House of Representatives, Lawson Oviasoje, told journalists that the management of the national assembly has “refused to pay legislative aides for six months.”

Even the few of them that have paid have been shortchanged, he said.

“We resumed work by June and most of us got [salaries] from August, September, the management deliberately delayed the issuance of letters to be able to perpetuate the fraud that they had in mind to do.

“As we speak, nobody has been trained.

“They just brought out a circular for training for LA1 and LA2 for the 23rd and 24th of December meaning that they will have to travel to their families on Christmas day,” he explained.

He explained that the aides see the management’s refusal to pay as an attempt to discourage them.

“The impunity in this institution is overwhelming. The point I’m making is that there is an attempt to short pay aides after such monies have been released by the finance ministry to pay aides because some of our colleagues were paid in full and some were paid for two, three months.

“What is the rationale for deciding who gets fully paid or should be shortchanged?”

No one from the leadership of the National Assembly was present to address the legislative aides at the time of this report.

This is not the first demonstration by legislative aides.

Aides of the eight Senate had staged a similar protest in 2018 making the same demands. Recently, the Senate President, Ahmad Lawan, promised that the aides will be paid soon.