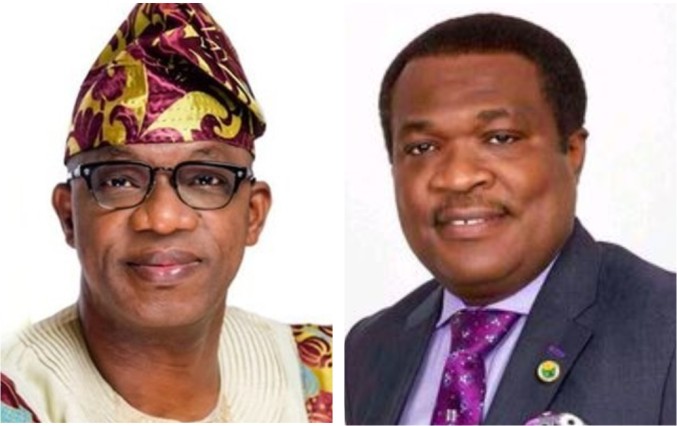 When it comes to the celebrity men in Ogun State, they are easily recognized wherever they go, they make parties tick and are very supportive of each other. They’ve made success of their career and are very rich. Oftentimes, without number, they always sit together as a caucus and their table is never in lack of choice champagne and cognacs. Their table always overflows throughout any party. One thing about these Ogun socialites is that they share a close-knit friendship, hardly will you see any party outside Ogun state that they will not record a high presence or be noticeable. They know how to party hard, especially the Ijebus amongst them and when they are having their party too, many socialites from different parts of the state troop into theirs. They are bonafide socialites. In the past few months, there have been major A-list parties in Lagos and their dominance was well-noticed. One of such parties was Otunba Gbenga Daniel, the former governor of Ogun State’s son’s wedding in Lagos which was very classy. The party recorded a dominant list of these sets of rich celebrity men who not only rock parties in their states but storm Lagos every now and then to attend one party or the other. Some of these men are the grand old men who are still ageing gracefully and attend major A-list parties in Lagos.

The former Ogun Governor, Otunba Gbenga Daniel’s wedding for his son was another avenue where the majority of them converged to celebrate one of their own. So, we can start with Otunba Gbenga Daniel himself. He is a prominent socialite whose style is exceptional. The former governor never disappoints admirers in the style department, anytime you see him. He loves to look good and he has kept up that standard for many years. Though he stays in Lagos, he hails from Shagamu, Ogun State. He is always at major A-list parties in Lagos. The grand masters of Nigeria’s social establishment, the likes of Otunba Subomi Balogun, Kessington Adebutu, Chief Olusegun Osoba, Chief Olusegun Obasanjo, Chief Bode Mustapha, the Osi of Egbaland, have always been a recurring decimal at Lagos parties because even celebrants love to have them at their parties.

Another top socialite in Abeokuta is Bukola Olopade, popularly known as Ozogula. He recently shut down Abeokuta for his in-law’s burial a few weeks back and it was full of celebrity big boys who came from different cities to celebrate with him. He is one of the faces who grace A-list parties in Lagos. He was fully on hand at Gov. Gbenga Daniel’s son’s wedding in Lagos a few days back. He was a commissioner under ex-Governor Gbenga Daniel. We will also mention the former governor of Ogun State, Senator Ibikunle Amosun, in fact, the ex-governor is one of the major faces we see at Lagos parties. He is very prominent within the social circle. Olumide Aderinokun is one of the new entrants into the Ogun political space and he is really fitting in so well. The man has been a regular face at Lagos events in the last couple of months.

Other celebrity men who grace many A-list parties are Chief Deji Osibogun, he was also one of the VIPs at Governor Daniel’s son’s wedding. The duo of Ebumawe of Ago-Iwoye, Oba Abdulrazaq Adenugba, the Olu of Itori land, Oba Abdul Fatai Akorede Akamo were also in Lagos a few days back to celebrate with the Daniels. This set of Obas are constantly at Lagos Owambe parties. Adron’s boss, Chief Emmanuel King, the top real estate guru surely knows how to groove, he has over 6 chieftaincy titles and always stages different kinds of parties by himself, he is one of the regular faces at Lagos parties.

Otunba Giwa Onanuga is a socialite par excellence, he is one of the many celebrity rich men who attend big parties in Lagos. He is a titled chief in one of the regberegbe, age grade group in Ijebu.

What of Otunba Bimbo Ashiru? The one-time Ogun Commissioner also makes the list. He is well known for being a good dresser. He loves exquisite fabrics and accessories. He never steps out of his house without looking good, whether in English or native wear. So good does he look all the time that many times at parties, he gets major compliments. He is always at Lagos parties. Afo Guarantor is another great socialite, Chief Afolabi Sodunke is a successful businessman in Abeokuta. He is into Construction. He is one man who also calls the shot at Lagos parties. He is a socialite and a Senior boy in that sector.

Prince Lanre Tejuosho, son of Oba Adedapo Tejuosho, is also on this list. The fresh-looking ex-Lawmaker appears good mostly in his native attire with his cap. He has a good taste for quality things. Bimbo Ogunbanjo, who is the NSE President, knows how to look good. His brothers, Senator Tokunbo and Lekan Ogunbanjo are also core corporate men, who are very particular about their looks.. The 3 were conferred with Otunba Title, in Erunwon Ijebu the same day and attended many A-list parties in Lagos as well.

Dr Bode Tawak is the Otun Giwa of Egbe Bobakeye in Ijebu. He is a very stylish man too and a party rocker as well. Chief Sunny Kuku is on this list but he belongs to the patriarchs’ caucus. . He is a man who knows what fits him. He also loves to wear long chains. His style of cap is always round. Whenever you see Chief Sunny Kuku at parties, you can be sure of the accessories he will be wearing. He loves to look good to parties. He is a regular at Lagos parties.

What of foremost billionaire, Funmilola Okunowo? He has a penchant for wearing expensive shoes and wristwatches. He knows how to combine colours when he dresses. He was spotted in Lagos at Governor Gbenga Daniel’s son’s wedding in Lagos, His brother, Bukunola Okunowo, is no small fry when it comes to fashion. He dresses well and attends social events in Lagos.

Otunba Gboyega Adesoye is another socialite to the core, he is a titled chief in Ogun State, he is one of the very prominent faces at the Ojude Oba festival in Ijebu. He is one of the A-list celebs who rock Lagos parties back-to-back. Kunle Soname is the Chairman of BetNaija, though his face is not a regular at Lagos Owambe but he attends quietly and once in a while.

Alayeluwa Oba (Dr.) Adeyemi Olanrewaju Adekeye, the Abepa of Joga Orile is also another King who dresses well. He loves good fabrics and accessories to go with them. He comes to Lagos to party many times. Let’s also add HRM Oba Omotunde Alaba Ebiyanmi Adako, the Oliyere of Iyere Kingdom. He is always stylish and wears exquisite jewellery. They are some of the Royal Obas who light up Lagos parties.

How about the Governor? Gov. Dapo Abiodun of Ogun State is a man of great style, be it in suits or native wears. He is one of the faces at Lagos Owambe.

CMC Connect boss, Yomi Badejo-Okusanya is on this list. He is also very stylish. Be it in native or English wear, he knows how to pair them so well, he is a party rocker. The boss of Leadway Assurance, Oye Hassan-Odukale, is also another corporate player, who knows how to spend his money and also looks good. Paper merchant, Bayo Abdul, has a sartorial style that is very unique. He is very eventful when it comes to fashion that you can be sure no person wears the same thing with him at parties. He is very fashionable. The Osibodu brothers, Gbolade, Owoseni and Kehinde are also not left out. They are corporate men who also know how to make statements in their native wears at any Lagos Owambe.

How Sen. DAISY DANJUMA Stood Out @...