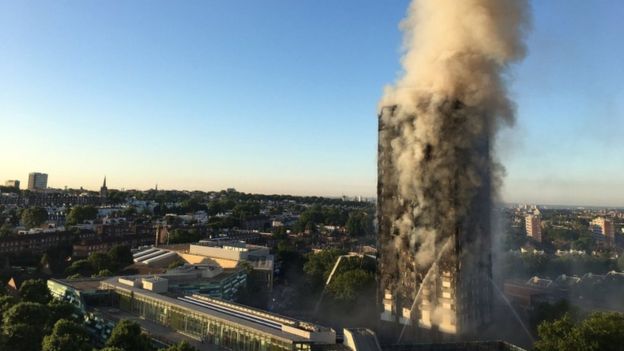 Six people have been confirmed dead after a huge fire raged through the night at a west London tower block, and police expect that number to rise.

Eyewitnesses described people trapped in the burning Grenfell Tower, in north Kensington, screaming for help and yelling for their children to be saved.

The 24-storey block, which is still on fire, looks at risk of collapsing.

During the night, eyewitnesses said they saw lights – thought to be mobile phones or torches – flashing at the top of the block of flats, and trapped residents coming to their windows – some holding children.

More than 50 people are being treated in hospital, London Ambulance Service says.

Commander Stuart Cundy, of the Metropolitan Police said: “I can confirm six fatalities at this time but this figure is likely to rise during what will be a complex recovery operation over a number of days.”

He said it was likely to be some time before police could identify the victims, adding that it was too early to speculate on the cause of the fire.

Revealed! 10 Factors That Will Work For...