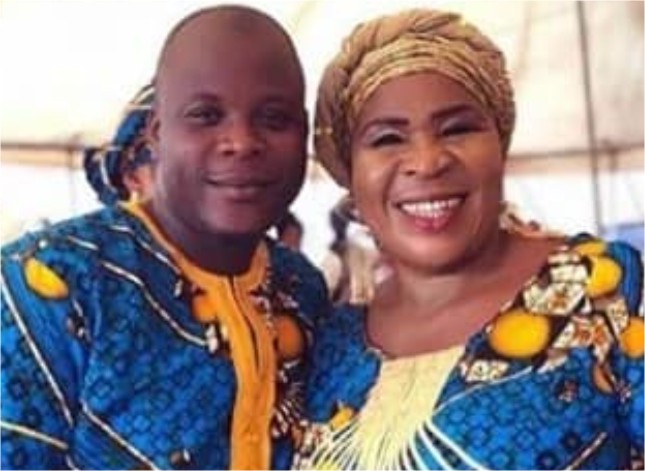 Afeez Balogun Adio, a popular Movie Director and filmmaker is the son of 2 veteran Yoruba movie actors, Madam Fausat Balogun AKA Madam Saje and Rafiu Balogun who are loved by many of their colleagues and fans. Afeez Balogun Adio is a young Director in the Yoruba movie industry who is known for the numerous fantastic movies he directed and produced. He is also a businessman and a practitioner loved by all his colleagues as he exhibits some of the wonderful traits of his mother. Madam Saje is a professional actress who plays numerous roles well and is very dynamic in the Yoruba home videos, this has made her numerous fans wonder what she is like off the camera. She is also one of the long lists of veteran actors who is loved by her colleagues and is always seen around young and upcoming actors as she mentors them into stardom.

Afeez Balogun Adio has made his way towards the same path his parents have taken and succeeded in. He has also made a good name for himself and made his parents proud and happy because he follows in their footsteps. On his visit to City People Office, he had a chat with City People reporters where he revealed some amazing things about his mother, Madam Saje. He also took us through the interesting story of how he left accounting for directing. Below are the experts of the interview.

Can you introduce yourself?

My name is Afeez Balogun Adio, I am a filmmaker, movie director and businessman because in the movie industry you have to be smart business-wise. I am from Awe in Oyo State but I grew up in Lagos. I rarely travel to Awe because I was born and brought up in Lagos Island. I attended Holy Cross Catholic School for my Primary school then for my secondary school I attended Eko Akete Grammar school, they are both located in Lagos Island. Then I attended Lagos State University for my tertiary institution where I studied accounting.

You are the son to 2 popular actors, what is your parent’s impact in your choice of occupation?

You know when a parent succeeds in doing one particular occupation; they would want their kids to walk in such a direction. Unfortunately, I wasn’t that type of child because I did not like acting. At that time, when I find myself around celebrities I don’t usually get excited.  I was only interested in facing my studies and graduating I did not want to be a part of acting. But when I was in year 2 in the university in 2002, Muyideen Oladapo Lala produced some movies that I fell in love with these movies were so nice that I fell in love with him. I began to see him as my small god. My parents were very surprised because they knew I was not the type to be always overjoyed when I see celebrities, but when I see Lala I become overjoyed. My mother saw this and told me that she will connect me with him. So Lala called me to come to his place the next weekend, I was counting days down to the day. The day came and I went to meet him at a rehearsal, when I got there I met with Okele, Taiwo Aromokun and the likes. I told him I was not interested in acting but just wanted to come by at weekends to watch him work. He sometimes put me on some scenes but ends up replacing me because it was not always what he wanted and it was not what I was interested in doing. But when I sit behind the camera I see their flaws and tell the director better ways to do it. They listen to me and it always ends up well. When I found out they listened to my ideas I began to develop an interest that they began to want to hear me speak. I studied accounting in school so when I told my parent I wanted to go into directing they agreed immediately. That was when I decided to follow Monsura Badina whose house was not far from ours so I began to follow him as a mentor and this was the period that young directors were trending. Again, I decided to follow young directors, I took all of their movies and watched them and picked out Oladele Mati who is a Lagos Island boy because I felt we would understand ourselves because I was also coming from there too. He mentored me well and I am thankful to God for today.

When you get to places, do people quickly identify you as the son od Madam Saje?

Well, some people know and some people don’t know. It is not possible for me to always announce it everywhere I go but when I need to gain access to some places or things easily, I introduce myself as the son of Madam Saje. That makes them want to listen to you so it’s a two-way thing.

Who is Madam Saje off camera?

I remember when she wanted to celebrate her last birthday I was writing down a post for her to which I did not eventually post. In the post, I remember I wrote that even if in her afterlife if she wants to come in as a sheep I would like to come back as her lamb. She is just too fantastic. She is loved by many people. Then for my father, he is a disciplinarian. He is also a very good listener that I give him kudos for that. He is a man of policy and he won’t stop you from doing what you feel is right. These are traits that I have inherited from my father. I am thankful for the kind of parents I have.

Are your parents still together?

Presently they are not living together but in marriage they are still together.

What are the traits you feel you have inherited from Madam Saje?

This is more like praising me, but some of my colleagues tend to tell me that I am like my mother. I can’t say much about myself but my mother, she is someone who tries to fix things to be better. When she sees that you have the prospect, she tries to guide you to not lose it.

What are the challenges you faced and learnt from being a Director?

Ifeanyi Madueke always tells me that, everywhere I go I should try to see a challenge and learn from it. So there is no bad challenge to me because I learn from everything and everyone. So when people tell me that I can’t do something I don’t relent, I actually struggle to prove that I can do it. So it is all a forum for me to learn and be better.

Is there a difference in the way acting and directing was done in the early days and now?

It is now different, in fact, a lot of difference. The procedure of how it is done then is different from now because the way of life was different from now. In terms of morals too, it is different because it would be hard to find a woman stroll by half-dressed but now it seems like a normal thing. The country and city we find ourselves in as an industry affects us in terms of what we need to work and how we work.

What can you say about the lifestyle of celebrities in the industry?

Well, there is more freedom now than before in the sense that when someone walks into my set dressed in a way I don’t like and I ask her to leave it doesn’t mean others won’t take them like that. It is a different case when the dressing does not suit the character I am asking her to play. So majorly, what anybody wears should not be your business. All that matters is to do what makes you happy but it doesn’t mean you should be dressed like a retard.

100 Celebrity Ijebu Women To Watch Out...