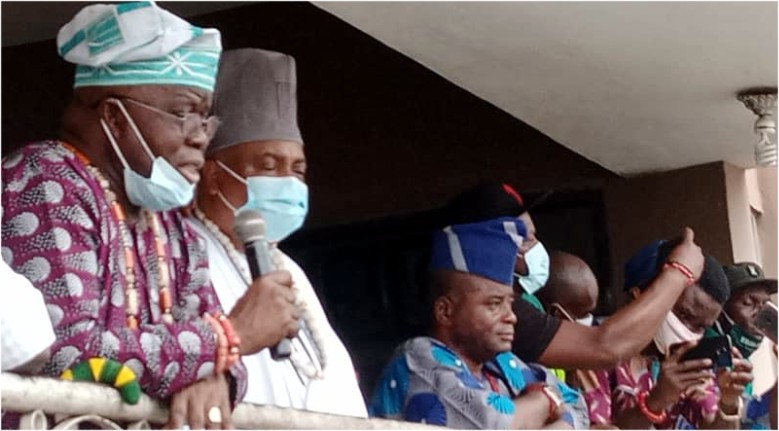 There is a raging crisis brewing in Makun Village in Ogun State, and it took a new turn as indigenes of Makun took to the streets to protest against alleged excesses of Oba Adewale Adeniji, the Oniranike Of Iranike who is being accused of using thugs to terrorize the people Of Idarika, Alaun, Simawa, Odofin Okerala and about nine other villages and towns.

The protesters which include old and young community members decried the unwarranted and illegal incursion into the neighbouring land around their community.

The protesters gathered at the palace of Ewusi and headed to Makun Oba Timothy Akinsanya and later marched peacefully to the palace of Akarigbo of Remoland to tender their grievances against a non-Makun Oba, Oba Adewale Adeniji the Oniranike of Iranike who according to the protesters, with the help of some strange people had been grabbing lands, chasing and driving Makun indigenes out of their homes, farms and villages.

According to the leader of the protest, Comrade Jamiu Olododo, the alleged king came sometimes in January 2020 with land grabbers who were armed to the teeth and they chased Makun people away from their lands causing mayhem as several people sustained injuries while running for safety and two people allegedly missing.

“The unfortunate incident was enacted again on Wednesday, March 11th, 2020 when the Oba led the thugs again to unleash another terror on the residents.

“Just about a year later according to the Protesters in their submissions, Oba Adeniji’s armed thugs came again with delicate weapons to attack indigenes of Makun, rendering most people homeless and farmless. They alleged that “Oba Adeniji is bent on hijacking no fewer than 4,400 acres of land which is about 26,400 plots of land belonging to 9 villages.

“His desperation to take over lands from other communities has been faced with rejection by the Traditional leaders of these villagers. The Ewusi of Makun Sagamu in Ogun State Oba Timothy Adesanya, speaking with newsmen also condemned the forceful attempt to take over the lands belonging to the villages and the ensuing fracas which has disrupted the peace of the villages. He appealed for calm as the Akarigbo has been officially informed.

Some of the residents claimed they have been living in fear over this continuous attack on their lands and lives and that all attempt to bring Oniranke of Iranke to reasoning has proved abortive as he claimed to be too connected to be stopped by anybody.

The Makun Youth President Hon. Adeyemi Kalejaiye and Comrade Olododo said “We implore our dear Governor Prince Dapo Abiodun, Inspector General Of Police, DG Of DSS, and His Royal Majesty, the Akarigbo of Remoland, who is also the overall paramount ruler of the thirty-three (33) towns that make up the Remo kingdom in Ogun State in Nigeria, and other security agencies to please intervene and help avert the looming war being orchestrated by Oba Adewale Adeniji, the Oniranike Of Iranike. If any bad thing happens to us while trying to secure our fathers’ land, the police and other security forces should hold him responsible”.

City People reporter reliably gathered that Oba Adewale Adeniji who is from Ofin claimed that he got a judgment from the court when he sued two faceless individuals that are unknown to the family, not the Baale’s and CDA officials in the community.

“The crooked judgement he got against two faceless individuals who are not part of our family nor have any bearing in the community or Cda can’t be imposed on any of our land. How can one Oba Adewale Adeniji go through the back door that he owns entire 9 villages where his domain is never known to the community?

“He has disrupted our business actively, forcing our people on self-exile because of the threat of the land grabbers”

“Our people who used to stay in their farms during the day and sneak to their houses at night can no longer go to farms nor homes. Their farms and homes have become a no-go area, no thanks to the destructive tendency of Oba Oniranike and his armed thugs.

“He has refused to appear before the state lawmakers who have waded into the issue to solve the matter amicably since February 6th, 2021 according to Oba Adesanya (The Ewusi of Makun), he has also failed to give satisfying answers to all our enquiries as to the information he thinks he has that gives the confidence to claim ownership of our lands and to also present valid documents showing that the lands which he claims are his, were bought from any of our families.

“Ask him, did he sue the 9 villages to get the kangaroo judgement? He is from Ofin town, so who is he related with in Makun that will allot 26,400 plots of land to him?

The Oniranike is drumming the beat of war and we really do not want to retaliate in the same manner. This act of disregard to leaders and people of 9 communities and the rule of law can cause war between Ofin and Makun if this Oba Iranike is not called to order” the Ewusi had said.

The Akarigbo of Remo, received the protesters prominent Remo high chiefs, and assured them that the matter will be resolved.

He told the protesters to sheath their swords to allow the matter be resolved in a non-violence manner by the council of Obas and the state machinery.

City People’s team put a call to the palace of Oniranike to confirm the allegation, HRH Oba Adewale Adeniji denied the allegation. He said he is only executing court judgement and that he didn’t bring thugs to intimidate anybody. However, Oniranike promised to speak to us at a later date on the matter.