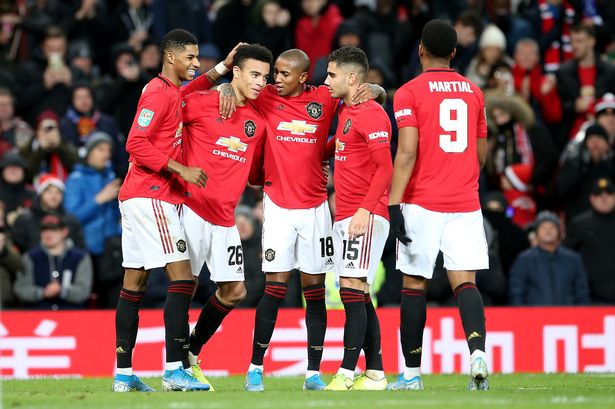 Ole Gunnar Solskjaer’s side reached the last four of the competition for the first time since 2017 when they went on to lift the trophy and progressed by scoring three goals in the space of 10 minutes.

“Fantastic days in Manchester,” said Solskjaer. “Of course we do really respect them and as I said after the last derby game, in my opinion, they are the best team in England.

“They can out-football you so we need to have our game heads on and be ready of them again. We have shown them as well that we can cause them problems so it will be two fantastic games.”

Marcus Rashford wasted numerous chances in a frustrating first-half but brilliantly broke the deadlock early in the second period by cutting in from the left and lashing home.

England international Rashford turned provider for the home side’s third which was converted by Anthony Martial, in between Ryan Jackson’s own goal.

Manager Solskjaer said before the game this was a competition his side “want to go all the way in” and it showed with a strong and experienced starting line-up containing the world’s most expensive defender Harry Maguire, Juan Mata, as well as Martial and Rashford.

In total, almost £200m worth of talent started for the home side at Old Trafford, in comparison to their fourth-tier opponents who had just one player – Harry Pell for £100,000 – that cost a transfer fee.

Colchester, the lowest-ranked team in the quarter-finals, defended deep in the opening period and forced the Red Devils into long-range, pot-shots with Rashford twice lacing wide and seeing a free-kick smothered by goalkeeper Dean Gerken.

Martial also fired a 30-yard strike narrowly wide but the fourth tier side were punished on 51 minutes on their first foray forward in the match. Full-back Jackson’s low cross was smothered by Sergio Romero before the Argentine goalkeeper set the hosts on a counter-attack which was converted through Rashford punishing finish.

John McGreal’s men were overwhelmed thereafter, Rashford could have had a second from Mason Greenwood’s vicious cross but visiting defender Jackson screwed into his own net ahead of him as Frenchman Martial slide home just after the hour mark.

There was no way back for the away side on their first visit to Old Trafford but they will be proud of a League Cup campaign in which they knocked out Premier League sides Crystal Palace and Tottenham.