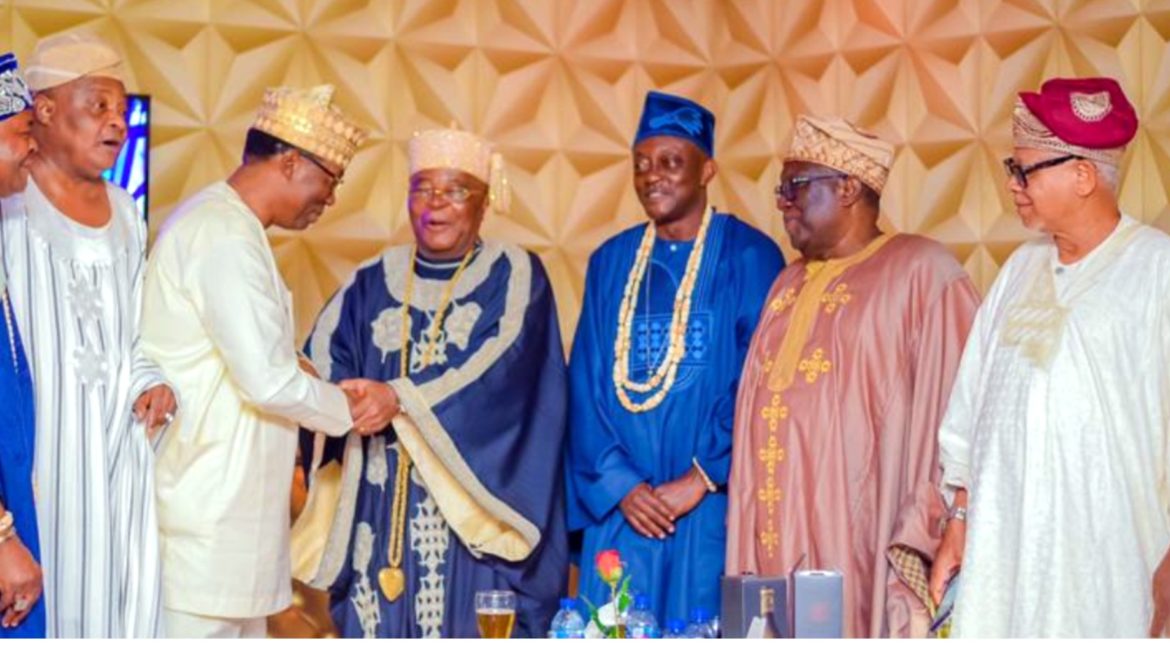 Recall that the paramount ruler of Egbaland, Oba Adedotun Aremu Gbadebo and a former Governor of Ogun State, Otunba Gbenga Daniel, were alleged to be at loggerheads which almost led to OGD allegedly threatening to unseat the king. It was towards the end of the eight years of OGD ‘s administration then, the issue created a lot of uproar in the state and many were saying Alake was taking sides with the immediate past Governor of Ogun, Ibikunle Amosun, who was an Egba man and has been aspiring to be the Ogun State Governor then.

City People can authoritatively tell you that the Alake of Egbaland and OGD are now on talking terms and have ended whatever rift that was between them.

Last week, OGD played host Alake, his high Chiefs at an evening of wining and dining at his 5-Star hotel, Conference Hotel, in Abeokuta, where Alake said he has nothing against the former Governor and adding that OGD has done so well during his administration as the Ogun State Governor.

In his remarks, he said  “People are making so much noise, but I must say, there is nothing going on between me and Otunba  Gbenga Daniel. Now, most people might not know, OGD  had lived at Ake before. We went to the same secondary school, BBHS, Abeokuta, again in Ibogun on December 26, 2006, he was there with three other kings who were former BBHS students, and the president of Nigeria that time, we were all together. You didn’t know what happened at that time and I am not going to tell you. Now, we talk about the Sagamu expressway, it was OGD’s idea, he constructed that road and it opened many doors for the state, the secretariat in Abeokuta, OGD built it, the day it was commissioned, the Awujale said when you are doing so many beautiful things in Abeokuta, what are you going to put in Ijebu? I said Kabiyesi, you should secure a state first and we will know what to do there.

OGD gave me the opportunity to write a report about my former boss, former president Babangida, it was in his house in Sagamu, I begged him that day not to let me talk about Babangida because it was totally forbidden in the army for a junior officer to write a report on their senior officers, but he insisted must I do it, and I was very happy because he allowed me to pay back and to clear my conscience forever and for Babangida also to improve on himself on what others say about him, I can go on and on about OGD.

So, coming here today is not the first time, I was here when the hotel was commissioned, and that day was the same day the former head of service was being celebrated out of Ogun state service. Being a paramount ruler, I had to leave there to attend the commissioning of this hotel, so coming back here is the second time. So when I say people are making noise, I mean that I have nothing against Otunba Gbenga Daniel, I have had lunch in his home in Sagamu and that happened not long ago.

You see, what happened when I criticised the quality of roads back then, the newspapers reported it in a wrong way. Then some people picked on it and started saying I am fighting with OGD because I criticized him now, once again and for God’s sake I have absolutely nothing against OGD. You have brought us to this beautiful dinner this evening, I want to thank those who are involved in planning all of this, particularly OGD himself, thank you very much and God bless you.

Many Don’t Know OGD & I Grew Up In AKE – Alake Of Egbaland Reveals A Lot was last modified: January 27th, 2020 by Bunmi Mustapha