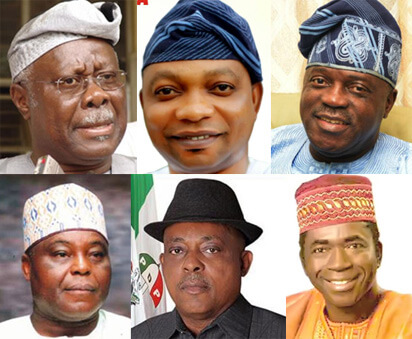 Few minutes before the commencement of voting at the PDP national convention it was announced that three of the chairmanship candidates had withdrawn from the contest. Chief Bode George, Mr. Aderemi Olusegun. Prof Tahoed Adedoja, Dr. Raymond Dokpesi, Prince Uche Secondus and Professor Tunde Adeniran The three who withdrew were Otunba Gbenga Daniel, Senator Rasheed Ladoja and Mr. Jimi Agbaje.

The development has left six candidates vying for the number one position in the party. The six are Professor Tunde Adeniran, Prof Tahoed Adedoja, Dr. Raymond Dokpesi, Prince Uche Secondus and Mr. Aderemi Olusegun and Chief Bode George who stepped down on Friday was not mentioned as having withdrawn as his withdrawal was made at a press conference and not directed to the Convention Planning Committee.

PDP will return the price of rice to N7,000 per bag – Fayose

Unveiling The Man Who Taught ATIKU The A.B.C Of Politics