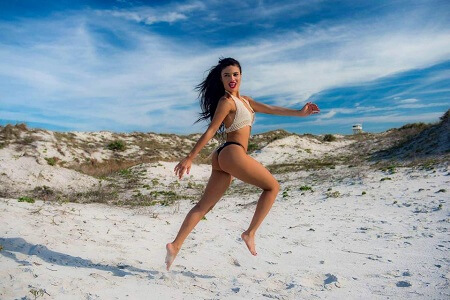 A glamorous woman has been found out to go out and have passionate sex with married men in exchange for free holidays.

Meet the glamorous woman who jets all over the world on travel dates with married men and other total strangers, but insists she is not a gold digger.
Heidy Pandora suffered from depression for two years and says travel dating saved her life – because she can’t afford to fund her jet setting lifestyle alone.
The 24-year-old, who is currently unemployed and describes herself as a “full-time traveller”, has visited more than 20 countries during her three years on dating site Miss Travel.
Former masseuse Heidy, who lives in Orlando, Florida, told Sun Online: “Some of the guys on the site are married.
“I don’t see it as such a big deal to have sex with married men. If they’re married and looking somewhere else, they’re not happy. Some of them don’t have any sexual relationship with their wives anymore.”
But Heidy – who has visited glamorous locations including Dubai, Morocco, Hawaii, Aruba and Thailand with wealthy men she’s met on the site – claims she never feels pressured into sex. Instead, she says: “If we connect, things happen. But if we don’t connect then we just have fun on the trip or I just come back.
“I would love to find the one, but right now I just want to travel and see the world.
“So (dating married men is) an advantage in a way that they will not get emotionally connected to me. And they will not want to pursue anything.”
She added: “I don’t pay for anything. You can do half and half but I prefer not to. I’m saving more for my own future. So I don’t want to spend money on travel because it’s really expensive.
“I’ve travelled with different types of guys, but I didn’t have sexual relations with all of them.”
Heidy, who says travel dating saved her life, added: “I suffered from depression for two years straight and I got to the point where I didn’t want to live anymore.
“So I told myself ‘if today was my last day, what would I want to do?’ My dream was to travel but I could never afford it. It’s too expensive.”
Heidy, who was 21 at the time, had just £2,300 in the bank. She added: “My first trip by myself was to Mexico.
“As soon as I saw the blue water the depression went away. After that I wanted to travel more, but I didn’t know how to.
“Then I came across Miss Travel and I kind of became addicted to it. It keeps me going in life. I still suffer from depression but it’s not as severe and travelling keeps me alive.”
Heidy, who lived in El Salvador as a child, added: “I just came back from Dublin, Ireland, and I’m already working on another trip to Nepal. “All my family know I do this. My mum is actually really happy for me because she’s always wanted to see the world.
“Most people don’t have the courage to do what I do, travelling with strangers. It’s basically like a blind date.”
Heidy has hundreds of followers on her Facebook account, but not all the reactions have been positive.
She said: “I do not care about anybody’s opinion. Who doesn’t want to see the world?
“The people that probably judge me have maybe envy and jealousy. I have been called bad names before like a gold digger. But I don’t feel that way and when I’m on these trips I do not ask for money.
“I’m only on the website to travel and see the world. I’m not there to look for a sugar daddy.
“So if anybody wants to call me a bad name, I don’t take that because I know I’m not there for that reason.”
Despite claiming she doesn’t ask for money, Heidy has been given gifts of up to £1,500 after her trips.
She added: “Some of them have asked me to move in with them, live with them.  But I’m not ready for that stage yet because my life is here in the USA.
“If I do fall in love with somebody, I will do that. But for now I haven’t met the right person.”
***
The Sun UK
Meet the Glamorous Woman Who Has Sex With Married Men in Return for Free Holidays (Photos) was last modified: June 1st, 2017 by Arinze Ago