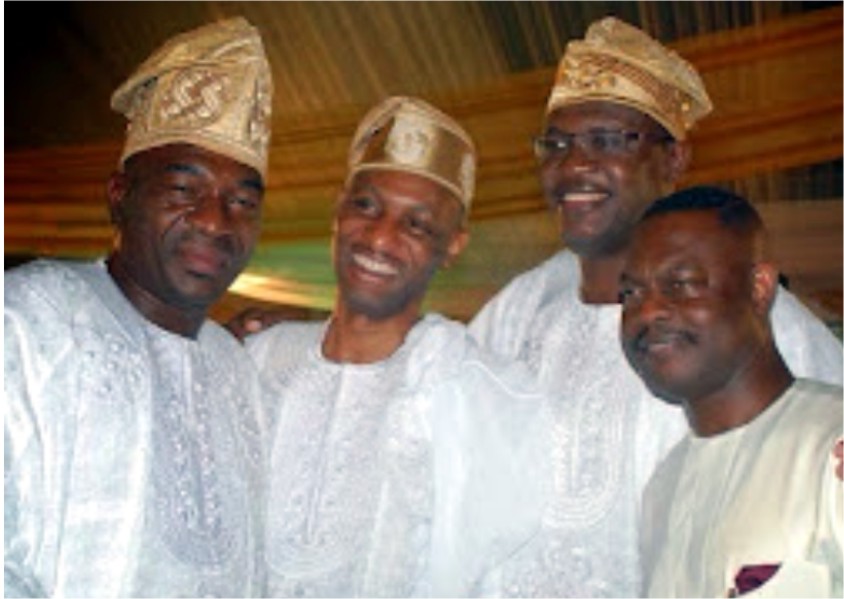 •How They Rock The LAGOS Social Scene

For many who don’t know, Abe Igi Anu Club is a notable social club put together by some of the biggest names on the social scene. It is a club which comprises the super-rich big boys in Lagos who have their hands in many lucrative businesses. They are very influential, wealthy and hardly will you attend any big party in Lagos and not find them there.

They usually make statements wherever they go and they are big-time spenders. They often move in groups, no wonder you see a handful of them at any social gathering.

The likes of Alhaji Rasak Olanrewaju Akanni a.k.a Lamex, Abbey Onasanya, Tunde Akinyera, Oris, Bola Atobatele, Ayo Shogbuyi, and Bola Adenuga are some of the notable names which makes up this club. etc. Ever since its establishment, notable musicians like KWAM 1, Yinka Ayefele and other artistes have sung their praises to high heavens at social functions.

So well known is this club that many desire to be part of it. This set of socialites was very visible last weekend at the wedding of the daughter of one of the Lord Mayors of the club, Alhaji Rasak Akanni Olanrewaju. The Haven Event Centre venue of the wedding came alive with an array of dignitaries who besieged the Ikeja venue. Popular musician, King Wasiu Ayinde was on the bandstand and being this club’s favourite, they all dazzled at the party.

Give it to the committee of friends of the celebrant, mostly the Abe Igi Anu Club members, They did more than enough. They stood by their friend and made sure the party was another avenue for them to unwind and party all the way. Big boys trooped in from far and wide, and even overseas, they were many at the party. They all came to celebrate with the celebrant he gave out his daughter’s hand in marriage to her hubby, Folajuwon Majiyagbe.

Their Lord Mayor, Lagos socialite and top maritime big man, Alhaji Rasak Akanni Olanrewaju is one of the big boys in Lagos who has his hands in many businesses. Very humble and highly dedicated to his job, he really does not enjoy being mentioned in public. He is one of the close allies of Globacom boss, Otunba Mike Adenuga, he has several chains of businesses scattered around Lagos and he is so popular among the freight forwarders in Lagos. He owns R&A Hotels which has branches in Ikeja, Agege, etc, Lamex Beverages and so on. His businesses spread across freight forwarding, Oil & Gas and he is also into the importation of wines. He has enjoyed a close friendship with many musicians especially K1 de Ultimate who happens to be one of his close pals. Alhaji Taiwo Afolabi is the brain behind the Sifax group, a business magnate and lawyer. He is the founder and current C.E.O of SIFAX Group, a conglomerate that deals in Maritime, Aviation, Haulage, Hospitality, Financial Services and Oil & Gas. He is a great philanthropist. Foremost businessman, Lukman Hamzat is a great entrepreneur of repute. He is the Chairman of Zatem holdings and a group of companies. He runs many businesses which include Zatem Hotels & Suites, Zatem wood factory, Zatem home interiors, Ambiance night club and others.

Popularly called Abana, Olashehu Kareem is a top hotelier and big-time businessman. He sits atop Valley View Hotel in Ikeja. The businessman has his hands in many lucrative businesses as well from farming, and real estate to the hospitality business, general trading and Oil & Gas. Prince Bola Atobatele is the Executive Director of Judamic International Ltd. He is also very notable.

They are set of freight forwarding big boys who call the shots at the Muritala International Airport. They are NAHCO big boys and they are very rich. They were at the party and their tables bubbled till the wee hours of the night as it was not lacking in exotic and choice champagne drinks. Their presence at any party shows the kind of gathering they belong to. They stole the show as they made it to the dance floor and sprayed endlessly.

Many of them are members of the freight forwarders association of Nigeria especially the Lagos State Chapter. They always sit together under a particular tree at Nahco Ports hence their club name, Abe Igi Anu.

READ ALSO: REVEALED! THE DELEGATES THAT WILL VOTE FOR TINUBU AT THE APC PRES. PRY.