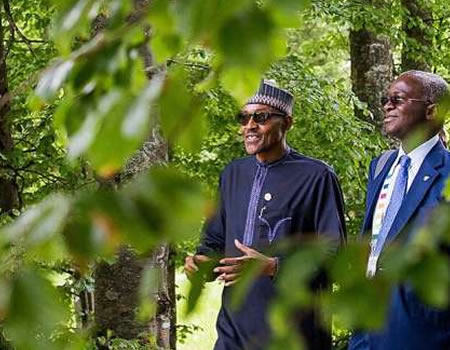 Not all the political spectators who are following the current surge of aspiration have ever considered the chances or possibility of Works and Housing Minister, Babatunde Fashola in the picture. Although the two-term Lagos governor and the 7-year-serving minister are evidently qualified to succeed president Buhari, he had perished in the thoughts of the minds of spectators. He was quoted to have said if he’s ever running for the presidency, it will be the president of his home.

The latest development shows that the minister may not have a choice but to throw his hat in the ring, as an internal source revealed that Babatunde Raji Fashola may have been the dark horse that Buhari has been hinting about. What is, however, not certain if former Governor Fashola knew of Buhari’s interest in him long before now.

The Minister for Works & Housing has been quiet for quite a long time and he has not dabbled into politics. All he has been doing for the past 2 years has been focusing on his assignment as Minister.

He was at the southwest reconciliation meeting held recently by the All Progressives Congress, (APC) leaders, Bisi Akande and Olusegun Osoba, and in all the post-meeting reports, not one statement was credited to him. He was reportedly silent, and indifferent throughout the period of the meeting. He barely showed in the group photos that were also shared online.

Even when his name was dragged into the list of those likely to run for the presidency in 2023, he kept mum about it. At some point in September 2021, his Special Adviser, Communications, Hakeem Bello issued a Press Statement distancing Fashola from the antics of an unsolicited support group. He urged well-meaning people to disregard the invitation of some groups operating under The Nigeria Project 2023, purportedly to the inauguration of a support group for the Minister and the Governor of Borno State to launch the 2023 elections.

Not many people can explain the bond between former governor Babatunde Fashola and President Buhari. They have both remained close ever since Buhari became president in 2015. Fasola is one of his most trusted allies as he entrusted him with the three juiciest portfolios in his first term; Power, Works and Housing, and he delivered effectively in the three areas with tremendous achievements.

Fashola’s age-long position has always been that if his former boss and political godfather, Asiwaju Bola Tinubu shows interest in the presidential race, he will not be part of it. City People gathered that BRF had at one time told all those who care to listen, privately, that he would not get himself into a race where he would now have to run against his boss, at the party primaries for the same ticket.

There are also revelations that despite his refusal to bow to pressure, forces within the Presidency have remained solidly behind him. With the challenge of the May 16 deadline for executive members who are aspiring for political office to resign, sources say Fashola’s case would be different as he has not verbally or officially declared his ambition.

“He is set to announce his ambition, resign from his office as a minister, and pick his nomination for the same week”, he said.

Another source revealed that President Buhari and Fashola’s relationship has grown to become a strong bond that none of their allies can explain.

“The President would consult the minister on salient administrative issues at times behind closed doors and we can only get a glimpse of their meeting after the President make some decision that seems to relate to the ministers’ ideals.”

It has so far been a very interesting race with at least twenty-three candidates having declared their interest in replacing President Muhammadu Buhari as the next president of the country. Although the front runners remain the former governor of Lagos State, Senator Bola Ahmed Tinubu, and the current vice president Professor Yemi Osinbajo.

The others are senators and some serving ministers, some of whom have previously served as governors. They include the Minister of Transport, Rotimi Amaechi, Minister of Labour, Chris Ngige, former governor of Ogun State, Ibikunle Amosun, former governor of Abia State, Orji Uzor Kalu and several others who have held significant positions.

President Buhari’s reported preference for Fashola is based on his all-time record of credible administrative delivery in all areas he has been given the opportunity to serve. He a transparent, accountable and reliable.

Babatunde Raji Fashola, two-term former Governor of Lagos State, former Minister of Power, Works, and Housing and currently serving as Minister of Works and Housing in the Federal cabinet. If there is anything these former and current positions have in common, it is that they are very complex models to navigate. It is virtually common knowledge that if you can govern Lagos successfully, you can easily take on the behemoth called Nigeria.

Having been in charge of three very pivotal ministries at once, especially with the ministry of power in the same equation, it can be one of the most tasking and challenging positions anyone serving in the federal cabinet can find themselves. Yet, he has conducted himself quite well, and even now while in charge of the Ministry of Works and Housing, his achievements are more than laudable.

This is a man who seeks to get the job done no matter what. He knows his numbers, employs the right expertise, and is individually savvy enough to know how to navigate tricky paths and ultimately deliver the goal.

To run or not to run? The answer is only two weeks before the primaries.

SHOCKER! Why Pres. BUHARI Is Looking @ FASHOLA was last modified: May 16th, 2022 by City People