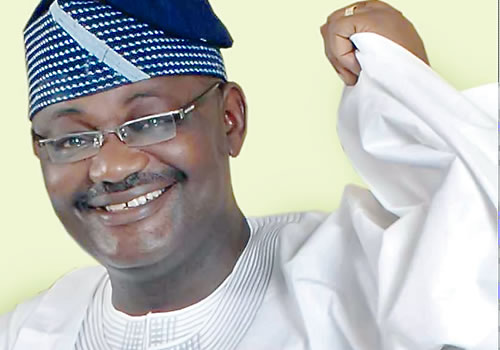 Over the last few weeks, the wave of acceptance and endorsement trailing the candidature of the Governorship flagbearer of the Africa Democratic Congress (ADC), Prince Gboyega Nasir Isiaka (GNI), seems to be hitting every nook and cranny of the state, as his campaign team goes all out and systematically opening the eyes of the good people of Ogun to realizing the need to collectively bring home the son of the soil, from Yewa to take over the position of Governor in this time and clime.

It is also worthy of note that, in tackling the challenge of the incumbency, this ADC gubernatorial candidate called GNI, has some trusted hands around him who have voluntarily wield huge and delicate duties in their care, these individuals have a huge influence in the seat of power. They are powerful; in fact, they are rulers of Ogun State.

Former President Olusegun Obasanjo received and endorsed the governorship candidate Gboyega Nasiru Isiaka (GNI), for Ogun state ahead of the 2019 polls. According to the country’s longest serving president, aside from the face that Yewa zone has not produced governor since creation of the state in 1976, “Gboyega Nasir is a worthy candidate who has ears and listens to the words of the elders”. He expressed his joy, having the opportunity to presenting a candidate who is worthy of being a leader.

Chief Fadairo, a chieftain of the African Democratic Congress (ADC), has also thrown his weight behind the “most cherished son of Yewaland”. Chief Joju Fadairo, who was one of the founding members of the Peoples Democratic Party, and a one time party chairman of the state, has vowed to ensure that Ogun people come out en masse to vote for GNI.

Yemi Sodimu, popular presenter, actor, and social cruder is not just one of the key players who have signed up to support GNI’s Ogun guber ambition, the resolute and articulate influencer is also playing major key roles in the cause to ‘change the change’ come May 29, 2019. Yemi Sodimu, who has vast experience in Ogun politics as an aide to two-term governor, Otunba Gbenga Daniel, is the head of the media committee for GNI campaign organization. Despite the fact that he is from Ogun central, his commitment to ensuring a landslide victory for GNI is immeasurable.

The support of one of Ogun creative minds, Engr. Tony Ojesina is a plus for ADC guber candidate. The one time commissioner for environment in Ogun State doubles at the Director General of Gboyega Isiaka Campaign Organization. He has in the last three months covered more grounds for the ADC in Ogun state and has put the party flagbearer in a position that keeps him ahead of other candidates vying for the same governorship position from other parties.

Mr. Olutoyin Okeowo is a successful businessman who has made impact in his home state in Ijebu. He is the Managing Director and Chief Executive Officer of Metropolitan Motors Limited in Lagos. He also serves as Treasurer of the Diocese of Lagos West (Anglican Communion) and the Treasurer of the Supra-Diocesan Board West.

Okeowo has been very influential in some of the major projects and programs so far made by the campaign team. To further show the close relationship between the two, when Mr. Okeowo’s company, Metropolitan Motors celebrated 2018 Christmas carol, GNI attended with his wife. GNI is also said to frequent the Okeowos’ home in Lagos.

Former Ogun Speaker, Titi Oseni Gomez has openly declared her support for the ADC guber candidate in Ogun and has maintained that the choice of GNI to be the next Ogun governor is divinely orchestrated by God. Honorable Titi, who defected from the Peoples’ Democratic Party, PDP along with over 5000 members in November 2018, is also contesting at the senatorial level and has been working simultaneously to achieve her ambition and GNIs’.

The Ogun State Chairman of the African Democratic Party, Dr Gbolade Osinowo, has implored every voter in Ogun State to come out en masse to vote and show overwhelming support for GNI.

Dr Gbolade urged the people of Ogun State to support Isiaka, noting that he remained the best candidate to right the wrongs in the system, alleviate the suffering of the people and make Ogun a state to reckon with in Nigeria and the world as a whole.

Balogun Nuru Olaleye has been an advocate of power shift to Yewaland, he has maintained that the choice of Gboyega Nasir Isiaka is timing and accurate for a time like this. He is one of the major players in the GNI campaign and has influenced so many in the grassroots across the community development areas of Ogun State.

A member of Ogun House of Assembly, Mr. Jimi Otukoya PDP-Ijebu North East, who defected from the People’s Democratic Party, PDP in 2018, is  a strong supporter of GNI, who believes in the cause of Yewa invasion. He controls a large cross number of Ijebu north voters which comprise of Oru, Awa, Ago iwoye, Ijebu Igbo and its environs. He also expressed belief in the ideology of ADC and all its candidates.

Former Ogun State Deputy Governor-elect, Alhaja Salimot Badru, has described the choice of GNI in ADC for the Gubernatorial elections as an “choice of God.” Badru, who was Ogun West Stakeholders Forum, in Ilaro in Ogun State, said the crisia rocking other parties in the South-West was a manifestation of the people’s call for a change in the governance of the region, saying the government of GNI, if elected will record a landmark success in Ogun’s political history.

Asiwaju of Aworiland, Senator Ayo Otegbola Senator Ayodeji Otegbola and a former chieftain of Peoples Democratic Party (PDP). He is a powerful force to reckon with in Awori. He is also a former chairman, Federal Housing Authority (FHA). His support for GNI is undoubtedly strong and he is mobilizing the Awori faction for ADC candidate.

A renowned historian and former don, Professor Anthony Asiwaju is one of the intelligentsia who has thrown their weight behind the ADC guber candidate, GBOYEGA Nasir Isiaka. The 89 year old Asiwaju of Yeweland, has appeared in most of the congresses, modality meetings and campaign for GNI. Asiwaju is also from Imeko, a densely populated community with shared purpose.

The Ekerin of Ota, High Chief Bamgboye A. Osunlabu is the Chairman of Yoruba Council Of Elders, Ogun State Chapter. While speaking with Newsmen at the Ogun West Stakeholders forum, High Chief Osunlabu expressed his readiness to support GNI, considering the good works which had made him worthy of the post. He, however, enjoined all Yoruba elders to support the ADC candidate in the cause of re-positioning Ogun State to an enviable position in the country.

Otunba of Ilaro, Dr.  SAJ Ibukunle has identified his interest to support GNI in the forthcoming governorship elections. Speaking on his trust in the candidate, Dr SAJ Ibukunle, expressed confidence in the choice of GNI, adding that he has what it takes to steer the wheel of the most referred State in the southwest.

Hon Lai Taiwo has testified of the qualities inherent Gboyega Nasir Isiaka and his antecedent with his experiences that will be useful in lifting Ogun out of this gulf; Hon Taiwo had categorically and fundamentally asserted that, “Ogun peope needs GNI to make their lives more meaningful.”

Chief (Mrs.) Apampa is a veteran Politician, a philanthropist and businesswoman from Yewa South. She is the founder of Iyaboapampa-touch-live Foundation, a group catering for the less privileged in the society. Her good name has given her huge followership in Ogun state, who are ready to follow or political advice. She has also identified with the candidacy of Gboyega Nasir Isiaka.

Alhaji Bisiriyu Popoola is a former PDP strong force, who left with thousands of loyalist to the ADC. He eulogised Gboyega Nasir Isiaka and described him as a true friend of the masses. Hon Bisiriyu was particularly happy with the good deeds of GNI in Ogun State. He pledged his unalloyed loyalty and that of the decampees.

Iyaloja of Yeweland,  Chief Mrs. Yemisi Abass, who is often referred to as grand matron of Yewa market women, has also declare her support for Gboyega Nasir Isiaka for the governorship elections in Ogun state. The Iyaloja has also emplored the market women to join hands with her and make this history a reality, so as to make life better for them.

The Olu of Ilaro, Oba Olugbenle, declared that Isiaka who is contesting under the platform of the African Democratic Congress (ADC) remains the “perfect candidate” to actualise the age-long aspiration of Ogun West senatorial district to produce a governor for the first time since the creation of the state.

The paramount ruler, who is loved by all in Ilaro, expressed optimism that a governor of Yewa-Awori extraction will address the marginalisation and neglect of the area in terms of development over the years.

Speaking on behalf of the monarchs, Oba Olugbenle said the people are ready to entrust their future in the hands of a competent and capable candidate.

Deji Ashiru is a big name in Ogun State. For 8 years, he was the Commissioner for Commerce and Industry under Gov. Amosun. Under him, Ogun State witnessed remarkable growth in terms of Industrialisation. He was one of those who wanted to be Governor in Ogun State before  the major parties got itself enmeshed in crisis. Aside from the fact that he is running for the Senate seat, Otunba Ashiru has been preaching the gospel of GNI in the whole of Ijebu and Remo, and has been carrying out major projects on behalf of the party.

Real estate guru, Otunba Olumide Osunsina hardly hardly takes part in political activities, but his confidence in GNI has compelled him to identify with the ADC guber candidate. He was at the Gboyega Nasir Isiaka Campaign Organisation (GNICO) Fund Raising Dinner and donated handsomely. He holds GNI in high esteem. He also believes GNI is able and capable. He explained that GNI has all the other resources he needs including capital resources to excel. He said GNI is a good product.

Many do not know that GNI and Akogun Wole Adebayo are close. He is playing a pivotal role in the campaign exercise within and outside Ogun State. Adebayo is the Chairman, Finance Committee, GNICO. He donated handsomely to the campaign. Also about 6 of the companies he has interests in donated as well.

The Asiwaju of Egbaland is Chief Olawale Ayinla (FCA). He is a Fellow Chartered Accountant. He thinks GNI is good for the job and should be supported. He traced back his relationship with GNI in the documentary.

Alhaji Yisa Bello is an influencial businessman. He campaigned for GNI. He said the choice of all those who have ruled Ogun State before now has been by Trial & Error. He said Ogun people should vote in GNI this time around. He said he will also use the appropriate Yasin (form of prayers) to bring GNI to power. He is a staunch muslim.

Within Ogun ADC right now, they call her Iya Governor (Governors mum). That is Chief Mrs. Olusola Ayoka Adebayo. Mrs. Ayoka Adebayo is OBJ’s sister. She was a former INEC Resident Commissioner during the last elections. She is a member of ADC. She goes everywhere with GNI to campaign. She says people call her Iya Governor because of the tremendous love and support she has for GNI. “I am over 80 now. What can make me happy now is if Gboyega Nasir Isiaka wins the governorship election. I will dance that day when he is announced winner”, she said.