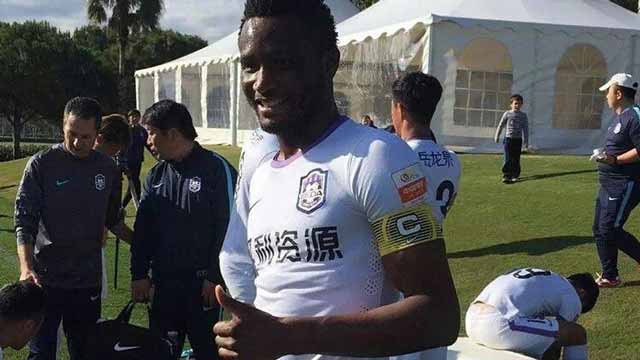 Super Eagles’ Captain, John Obi Mikel, is having a good start to his career in China for his new side Tianjin Teda after 11 trophy-laden years at Stamford Bridge with Chelsea.

The former Plateau United star has been handed the skipper’s band by the Chinese team, as well as a more attacking role.

Tianjin Teda has retired their number 12 jersey, the shirt number Mikel wore during his 11 years stay at Stamford Bridge, and the 29-year-old jumped at the chance of once again wearing the number 10 jersey he has always loved since his days as a youth international for Nigeria.

Mikel captained the team in their 2-6 friendly loss to German side St. Pauli, and in the same game, he found the back of the net for his new side in the iconic number 10 shirt and in his favourite role as an attacking midfielder.

He now plays just behind the main striker for his team, same role he plays for Nigeria in international games as opposed to the defensive midfield role he played during his time at Chelsea.

Already, he has won over the coach of the Chinese side and the fans with his humble attitude despite his status as the biggest star in the team.

Mikel gets Tianjin Teda’s Captain armband and the number 10 jersey was last modified: January 17th, 2017 by Arinze Ago

Why We bombed University of Maiduguri mosque – Shekau