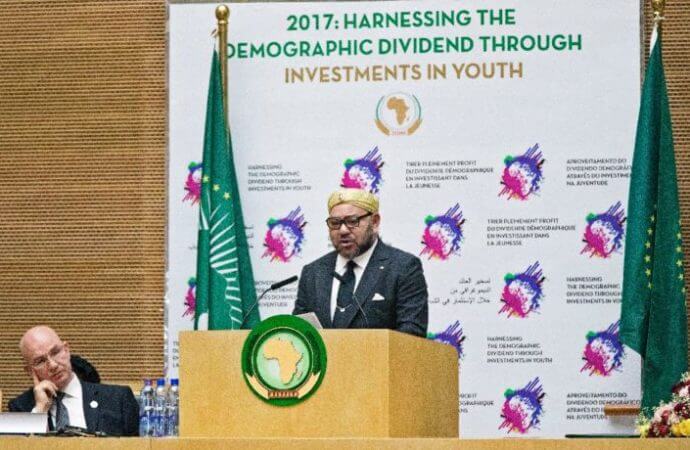 The King of Morocco Mohammed VI delivers a speech in Addis Ababa on January 31, 2017.AFP/Zacharias Abubeker

Morocco’s King Mohammed VI took a seat at the African Union headquarters on Tuesday for the first time in 33 years after being re-admitted by the bloc.

“It is a beautiful day when one returns home after too long an absence. Africa is my continent and my home. I am finally home and I am happy to see you. I missed you all,” the monarch told the closing ceremony of the AU summit in Ethiopia.

Morocco’s return to the fold comes a day after 39 of the AU’s 54 member states agreed to allow Morocco back in the fold, despite stiff resistance from countries such as South Africa and Algeria over the status of Western Sahara.

Morocco quit the then Organisation of African Unity (OAU) in 1984 after the bloc admitted the former Western Sahara as a separate member.

Morocco maintains that the former Spanish colony under its control is an integral part of the kingdom, while the Polisario Front, which campaigns for the territory’s independence, demands a referendum on self-determination.

Some had feared Morocco would demand the expulsion of the SADR as a precondition for its own return to the AU, however the country agreed to return without conditions.

“From the moment that Morocco did not impose conditions … we take their word for it and accept that Morocco be admitted to the African Union,” said Mohamed Salem Ould Salek, foreign minister of the Sahrawi Arab Democratic Republic (SADR), which claims sovereignty over the entire territory of Western Sahara.

Salek said Monday that having Morocco in the same room would allow the SADR to pressure them into fulfilling their obligations and allowing a referendum in accordance with a 1975 decision by the International Court of Justice.

“Now (if) Morocco is blocking (it) will be questioned by the head of states: why are you afraid of a referendum? “Why don’t you allow the Sahrawi to choose their future freely?”