Home News ‘My future is at Chelsea’, am not leaving for now. – Willian
News 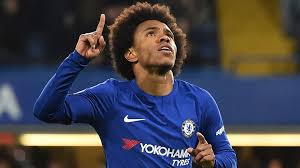 The Brazilian has been linked with a move away from Stamford Bridge, but insists he remains committed to his current club

Willian has clarified his Chelsea future after his winning goal helped the Blues to a 2-1 win over Newcastle at stamford Brigde on Saturday.

The Brazilian struck shortly after half time to restore Chelsea’s lead after Ciaran Clarke’s goal had cancelled out Pedro’s opener.

The result helped Chelsea to tighten their grip on fourth place in the Premier League, and afterwards Willian was at pains to reassure fans that he sees his future in west London amidst speculation he could leave in January.

‘My future is at Chelsea’, am not leaving for now. – Willian was last modified: January 14th, 2019 by Igbokwe John