My GHETTO BRED Movie Has Been A Huge Success – Eniola Badmus 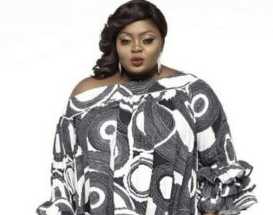 Popular actress, Eniola Badmus has been in a happy mood for the past 11 weeks. We can tell you that for sure. Why? It is because of the huge success that her movie, Ghetto Bred, has recorded at the cinemas and the huge income it has raked in for her.

A few months back, movie star, Eniola Badmus premiered her new movie Ghetto Bred, which has been showing at the cinemas nationwide, for the past 11 weeks. All the reviews of the movie produced by this talented and versatile actress and movie producer have all been positive, as more and more people troop to the cinema to watch the movie, which has as cast the likes of Jide Kosoko, Lisa Omorodion, Bolanle Ninolowo, Helen Paul, Ireti Osayemi, Peggy Ovire, Fish Oyebolu, Ushbebe, Yaw, Nedu and Broda Shaggi. The movie was directed by Kingsley Iweru and soundtrack was by Olamide Baddo.

Right now, Eniola is putting finishing touches to yet another movie HOUSE HELP, which will hit the cinemas on 17th August, in readiness for Ileya period.

It will be shown all over the South West Cinemas.  Since the beginning of the year, Eniola has been busy with so many projects and she has also been in hot demand by other movie producers who desire to use her in their movies.

Last week, City People Publisher, SEYE KEHINDE, interviewed her for close to two hours at her new Oniru Estate residence. During the interview, she spoke about her career and brand, which has been on a perpetual rise for the past few years. Below are excerpts from the interview.

Your movie Ghetto Bred has been doing well at the cinemas, and it has met with a huge success. How does that make you feel?

I feel good. I feel super, super honoured because this is my 1st major film at the cinema. Ghetto Bred has done so well.

Ghetto Bred has made millions. We thank God and I am happy. What helped us was that the promo was very, very huge, what we had on social media was huge, what we had off-social media was huge. We had a lot of billboards in Lagos. We had over 15 billboards in Lagos. We were doing promo everyday. We were out there sharing fliers, creating awareness with people to know about it. Of course, we did massive campaign on social media.

Eniola Badmus has been in high demand for months and many movie producers want you on their set. How were you able to create time for your own movie?

Immediately we started the campaign, I went off work becuase that was the only time I can dedicate to do my thing. I had to create time for myself. By next week again, I will be off to give me time for my new project at the cinemas called House Help. We need to work towards it.

We have started work on it already on social media. We are trying to do some promotion on some billboards and create campaign awareness across the South West region because House Help is a Yoruba film. We cannot put it in all of the cinemas in Nigeria because of language barriers, so we are doing South West Cinemas because they can understand what we are saying.

How easy was it putting Ghetto Bred together and how did it come to you?

It wasn’t an easy one, from the story line. Majorly, I just wanted something everybody will be able to relate to it. We have so many Oyinbo speaking films. I just felt let me just break out from what everybody is used to. Lets have a Ghetto film. Most of Ghetto films are quite funny. We are not just looking at the funny aspect of it but we are trying to show the lifestyle of people in the Ghetto, what they do there. To me it is a way of letting the world know how some other people live. So when we try and show people how these people live, somehow, someone can just standup for them and help and say you know what, lets contribute to their lives, lets empower them.

My GHETTO BRED Movie Has Been A Huge Success – Eniola Badmus was last modified: August 5th, 2018 by Seye Kehinde