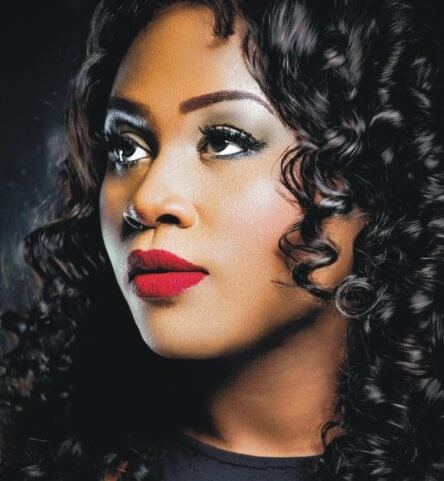 Seyi Adura is a singer/songwriter from South-East London. Her musical influences sprawl over diverse musical styles she loves to play. Seyi actively seeks out people, who are different to her culturally and musically to create something completely unique. Her music is like that of many great artistes. She works on songs tirelessly until she is 100% confident in them.  Speaking with City People Society Reporters ADEOTAN OSUNYOSADE AND TITILOPE OGUNLEYE, at the magazine’s headquarters at Gbagada, Lagos, she spoke on her about to be released EP and how she plans to work her way into the hearts of Nigerians with her music.

My name is Seyi Adura. I am from Ondo State in Nigeria but born and bred in UK. I am a singer, song writer. I studied Mechanical Engineering at the university in UK and earned  a masters’ degree in Mechanical Engineering, but my passion has always been music and singing, so I am currently in the process of making my EP, working with a producer and we are planning on putting about 5 to 6 songs together which we would then release into the Nigerian market.

How long have you been out of the country?

I just intermittently come and go. In 2011, I did a year NYSC and then I went back to the UK and continued working over there, but usually I have been visiting back and forth with my family on holidays.

Let’s talk about your EP. What should we expect?

I think it would have a touch of Afro beat, I guess everyone is used to that genre. There would also be influences of where I am coming from, the Western world in it. Some of my biggest influences in music that I like so much Sade Adu, Michael Jackson, Rihanna and Beyonce. In the UK, we are also aware of the Wizkid, Tiwa Savage and Davido. They played their songs and all. So it will have some of their influences obviously because they are the top artistes right now in Afro beat and, of course, my background. I am coming from the UK, so expect a bit of RnB, hip hop and Pop.

Are you planning to feature anybody on your EP?

Right now, I am just working on tracks. It’s quite organic with the producer. I guess if somebody wants to feature then we would but I haven’t said oh I want to work with this person or that person. I am just writing and creating, but the producer I am working with has worked with other artistes, so if we do a song and he feels it should feature an artist then I would leave that to him to decide.

What kind of music do you play?

I would say a bit of pop. That’s the kind of music I am used to writing, but I think pop music stands for music that is just popular. Here, I would say the music that is popular is Afro Beat, so I will see what I can do with Afro Beat. My pop and RnB influences I will try to put all that together and see what I can create. That’s basically what I am trying to do.

Apart from Sade Adu and the likes of Beyonce, who else inspires you?

I would say it’s a range of people. Micheal Jackson in terms of his performances, Sade in terms of how she is quite classy with her music and performance and Beyonce, to have that kind of career would be amazing. I don’t think I have got a specific favourite artiste; I like different things from different artistes. Growing up, my dad used to play Ebenezer Obey to Sunny Ade and all that, so my influences come from everywhere.

How do you plan to penetrate the Nigerian music industry? I am sure you know that there are so many upcoming artistes and even the popular ones. How would you make your music to be acceptable out there?

Well, that’s partly why I am here to network. I have put aside a couple of weeks to see what the Nigerian music industry is like, it is important that I came out here to record the music as well, so that I could soak in the culture, I guess that will allow the music to be authentic and organic. You know the producer could make a beat and just email it to me in London and I could record, but I don’t think that would allow for it to be, as organic as it should be, so I thought it’s important for me to just be here, be around the culture, take different things in and get inspiration. And also I guess that’s why I am here having this interview and slowly get my name out there to people as well.

I have always been singing since I was a kid. About like 5 years old. Professionally, it’s been on and off, but as a kid, I sang solo in school, stadium and across London, but as time went on, when I am in Nigeria I have always gone to a studio to record and work on music, but in the past 2 years, I have decided that this is something I actually want to do and should be taken a bit more seriously. So I am still trying to meet a lot of people.

Who would you like to work within the industry?

It will be nice to work with Wizkid because I think he will add a different dynamism to the way I sing and what I am like in the studio then I like to listen to Davido, so to work with him would be great and Tiwa Savage as well and Adekunle Gold is good too. Would also love to work with Simi. Her voice is different and unique.

Do see yourself doing a Yoruba song?

Yeah! That’s why I am here obviously. I understand it a lot, but it’s one of those things. The hope is that when I am home here the phrases and words would come back to me. Because when I was here in 2011, I was picking the pidgin English, slangs and the more you are among the people the more you pick it up. And that’s why I am working with this producer here so that he can kind of show me how to say certain words cos when I write it just in English so he will tell me a slang to throw in that will catch on quicker with people. His name is STG, but he works under Sarz. I met him just through networking and he sent me a few beats that we have worked on.

Do you have the intention of staying in Nigeria to do your music?

Yeah, the plan is to see how it goes and that’s the hope, but just going with the flow right now. I believe in my music, so for me I know people will like it so, why not?

How Eating Cocoyam Can Make You Stay Healthy

SAVAGE: ‘I only Do Money Rituals In...