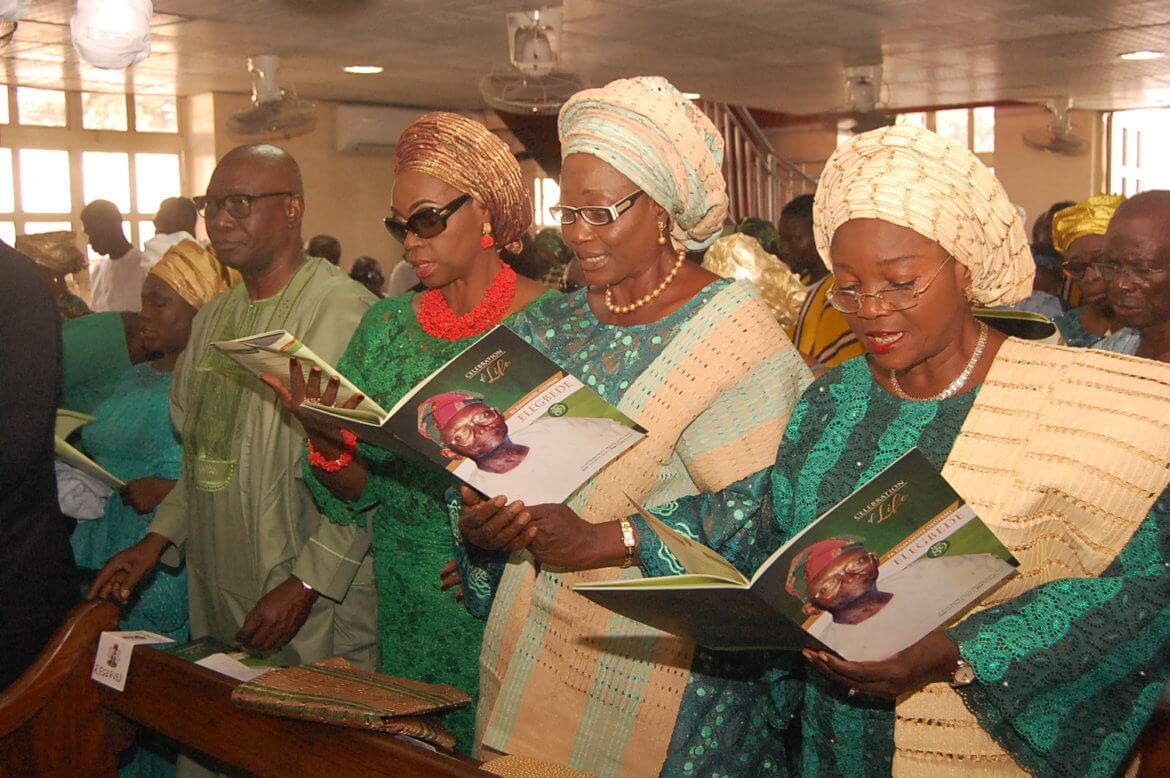 •How His Family Members Gave Him A Classy Burial

On Wednesday and Friday precisely march 21st and 23rd, 2018, the children of Late Pa Emmanuel Olufemi Elegbede gathered together family and friends to celebrate the life and times of their late patriach.The late Pa Elegbede is the father in law to the 2 time former Lagos Commissioner of Information and Strategy, Dele Alake. No wonder,many important dignatries stormed the burial party to honour him.City People TAYO FAJORIN OYEDIJI and ADEOTAN OSUNYOSADE covered the burial.

RETINUE OF FRIENDS AND FAMILIES STORMED THE WAKE KEEP SERVICE

The Elegbedes gathered friends and family to pay their last respect to their patriach, Pa Emmanuel Olufemi Elegbede few weeks ago in Lagos.The burial programme started with a wake service  held at Darlington Hall Ilupeju, Lagos on March 21st, 2018. The evening started with soothing choruses by the choristers then the opening prayer was led by one of the men of God present, Pastor Nnamdi. The wake keep which was done in a short space of time had more of various Hymns rendition in honor of baba.Presiding over the wake keep service was Pastor Danjuma of the Redeemed Christian Church of God, Corner Stone Parish who delivered a thought provoking sermon. He encouraged those left behind to live a Godly life as no one knows when death would come.He also commiserate with Baba’s children and their families.

Araromi Baptist Church in Mooney, Lagos Island was in charge of the funeral service for pa Elegbede. He was a staunch baptist member till he died and no wonder why many top hierachy of the church came out to give papa their last respect.The service which started at 11am was presided over by Rev Akin Adewopo. He was joined by close to 12 other ministers of God who took part in the order of worship.

Pa Emannuel Olufemi Elegbede fondly called EOE lived a very good life. His life and times were well celebrated at his burial. He was born in Lagos as the first son and only son of his mother. His father was the pioneer leader of the Oyo Christian Association in Lagos. Papa started his education at Holy Cross Catholic School and later he went to St Gregory College in Lagos. Pa Elegbede has worked at different top Manufacting Company in Nigeria which includes UAC,Vono Plc and Nipol Plc. He is a staunch member of the Baptist Church and has performed in all executive roles of the church from being a member of the choir, Church Secretary,to church treasurer and all. He was a foundation member of his society at Araromi Baptist Church, Lagos and later became the vice chairman and has also served as a patron to 2 other societies. He died after a brief illness at age 89.

WHAT HIS WIFE,ELIZABETH WILL MISS ABOUT HIM

The widow of Pa Elegbede, madam Elizabeth Ebun Elegbede, EEE nee Folarin was the biggest hit at the burial having lost her partner of over 6 decades.. She was surrounded by her children and grandchildren. Madam Elizabeth who is also from Ilora Oyo state has been married to her husband for 66 years and the marriage is blessed with 6 chuldren and many grand and greatgrandchildren.Mama penciled a beautiful tribute to her husband whom she calls ‘my love’. My love,my bestfriend,my laughter,my soulmate,my one and only, more than a husband.On a personal level, I am very sad that my husband has gone, more than that I am grateful to God for all the years that we have spent together and for letting me see for myself what a great and wonderful man he was. Rest on dearest.

HOW PA ELEGBEDE PLANNED HIS OWN BURIAL

It was shocking to many at the wake keep service when close families and the children of the late icon revealed how Pa Elegbede had already planned his burial before he passed on. Many of thm described papa as a very meticulous man,hardworking and someone who puts attention to details.They also testified that Papa has always had to do some book keepings for them individually, that he is that calculative and very frugal.They also revealed that because papa likes everything to be done accordingly,he had written down the names of whom to call when he dies,how they should buried him,what they should write in the programme phamplet like the hymns and songs,where he should be buried and how the burial plans, who to handle what should be. These were part of the many things they said Papa had planned and even where he wants to be buried. Many guests shook their head in suprise but give it to Pa Elegbede,his children testified that their father was a prim and proper man whose strive for excellence and success is not negotiable.

The relationship that existed between Asiwaju Tinubu and the former Lagos commissioner, Dele Alake, dates back several years ago and this was evident at the burial. Asiwaju Bola Ahmed Tinubu stormed the church and was one of the early callers, when people were almost speculating whether he will attend, his presence caused a standstill for few minutes as he was seen exchanging pleasantries with other important personalities. Dele Alake has been one of the closest persons to Asiwaju Tinubu and during Asiwaju’s reign as Lagos Governor, Dele Alake was the commissioner for Information and Strategy.They are seen to be very very close and their is no event Dele Alake holds that Tinubu will not show up. No wonder Asiwaju led over 8 governors to Dele Alake’s sons wedding 2 years ago in Lagos.

DO YOU KNOW HOW CLOSE VP OSINBAJO AND DELE ALAKE Are?

We can tell you for free that the relationship that exists between Dele Alake and VP Osinbajo is very cordial,infact they are best of friends.VP and his wife, Oludolapo honoured  Dele Alake by both attending the church service while his wife also attended the reception. They have been together for over 45years.They both share a robust friendship,  they have been family friends for many years. Apart from attending same high school, same class, same church and all,they have never broken their chord of friendship for once.When Dele Alake’s son got married,VP Osinbajo officiated, infact it was the last service Prof Osinbajo presided over at the church before he began his journey as the Vice President of Nigeria.Also Dele Alake was a recurring decimal at Abuja last few weeks when VP Osinbajo’s daughter got married.

BETWEEN DOLAPO OSINBAJO AND

Dolapo Osinbajo is the wife of Vice President, Prof Yemi Osinbajo and Sumbo Alake is the wife of Fmr Lagos Commissioner, Dele Alake. The friendship that exists between the duo date by over 30 years ago. They have been friends since their husbands met and eversince they have not been apart. They attend same church and stay in the same choice area on the Island. They are both reserved and prefer to work from the background. They have been the pillars behind their husbands and always in support of each other. Dolapo’s was up and doing at Sumbo’s sons wedding and this was also replicated at Dolapo daughter’s wedding. both are inseperable and they were seen seating beside each other and gisting away at the burial. You could see that the level of their closeness keeps getting stronger.

The honorable Commissioner for Information and Strategy, Mr. Kehinde Bamigbetan was at the wake to support Dele Alake who was the former Commissioner of Information and strategy far back in 1999-2007. He was seen in a white Agbada and blue Aso Oke cap. They have been friends for long.

Former Commissioner of Information and Strategy Dele Alake and Mr. Babatunde Adebiyi who described himself as the first son in-law to baba was seen at the fore front making sure that things were in other.They led other inlaws to the burial and were seen holding major functions at the burial reception.

AMAZING TESTIMONIES FROM FAMILY AND FRIENDS

During the wake keep service, few people gave heartwarming tribute about Pa Emmanuel Olufemi Elegbede fondly called EOE by most people. Baba was described to be a very honest and meticulous man. Baba died as a believer. He was so organized; he organized the lives of his children till he took his last breath. Reminiscing on baba’s life while he was alive showed he was very caring and accommodating to everybody. He left a good legacy. Some of the testifiers are Chief Bayo Makinde, Mrs. Tayo Akinbiyi, Mrs. Bose Adebiyi, a Rep of Egbe omo Oyo Ilueko, MR. Shittu and few others.

AND CIVIL SERVANTS WERE THERE

At the event were state functionaries and political holders in Lagos and beyond who have come together to celebrate with Dele Alake on his father in-law’s burial. Present at the burial were APC national leader, Asiwju Tinubu,tokunbo Afikuyomi,Senator Obanikoro, former PDP guber candidate,Jimi Agbaje, Lagos Comm for Info, Kehinde Bamgbetan, Lagos SSG,Tunji Bello and the likes.

RECEPTION WAS AT HARBOUR POINT

The grand reception party was at harbour point and guest had a lovely time celebrating with the Elegbedes. The colour code for the wedding was green and gold. The beautiful ambience of the venue was well decorated and top event vendors were on hand to cater for guests.

With the color of the day being Green and Gold, the hall had simple but classy decoration of white and a touch of green here and there. Green carpets were laid at the entrance and on aisles leading to the beautifully decorated tables. Not to talk of the Chandeliers that gave it an elegant appearance. The pretty smiling ladies who ushered at the event had on a traditional look in white iro and buba, their well tied gold gele and a traditional coral bead. They made sure every guest had a place to sit and were well fed.

THORPEEDOH BAND ON THE BEAT

Pa Elegbede’s children took over the center stage one after the other as Thorpeedoh band did their music magic, dishing out wonderful highlife songs and they thrilled guests with their lovely tunes. Some couldn’t help but to join the Elegbedes on the dance floor.

There were several stands of food vendors, small chops and cocktails at the reception. The food vendors served guests with different delicacies to their merriment. Guests had many options to choose from and enough to munch on, all thanks to some of the diligent brands in charge of food and drink. The Malas foods, Beyond Tastee catering, Sweet Saveory, RL Desserts Cuisine Fantastique, Divine cocktails, Barcode cocktails & more.

AN ARRAY OF IMPORTANT PERSONALITIES

How Late Pa ELEGBEDE Planned His Own Burial was last modified: April 5th, 2018 by Reporter