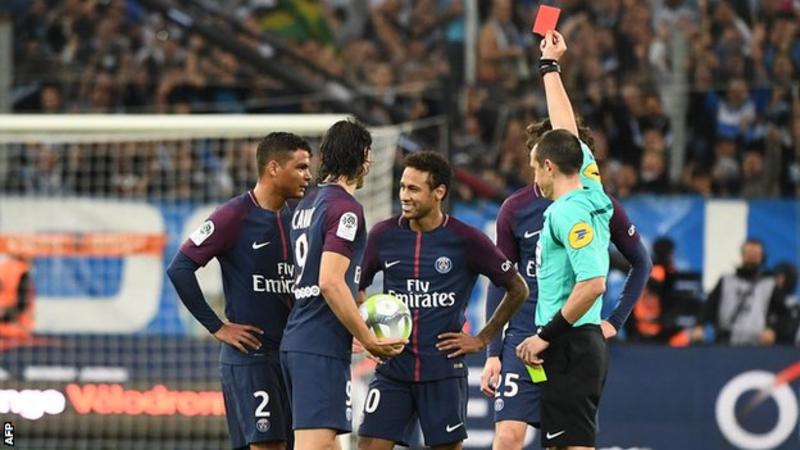 World record signing, Neymar saw red card for the first time in the Ligue 1 but Edinson Cavani scored a stunning 93rd-minute free-kick to salvage a draw for Paris St-Germain against Marseille.

Luiz Gustavo got the opener for Marseille with a 30-yard strike before Neymar equalised after the half-hour mark for his 10th goal for PSG.

Florian Thauvin put Marseille ahead with 10 minutes remaining before Neymar was booked twice in two minutes.
Cavani then equalised with a 25-yard effort that went in off the crossbar.

PSG fans are banned from attending the game known as Le Classique and Marseille fans clashed with police prior to kick-off at the Stade Velodrome.

Neymar was pelted with objects from the crowd as he took corners in the second half and on one occasion had to be shielded by police as he took a set piece.

The Brazil forward, who joined from Barcelona for a world record £200m, received his second booking on 87 minutes after an altercation with Lucas Ocampos, who went down dramatically in front of the referee.

Unbeaten PSG are four points clear of Monaco at the top of Ligue 1, while Marseille stay fifth.

SEE ALSO: NEWCASTLE VS PALACE: WE HAVE A GOOD TEAM – BENITEZ