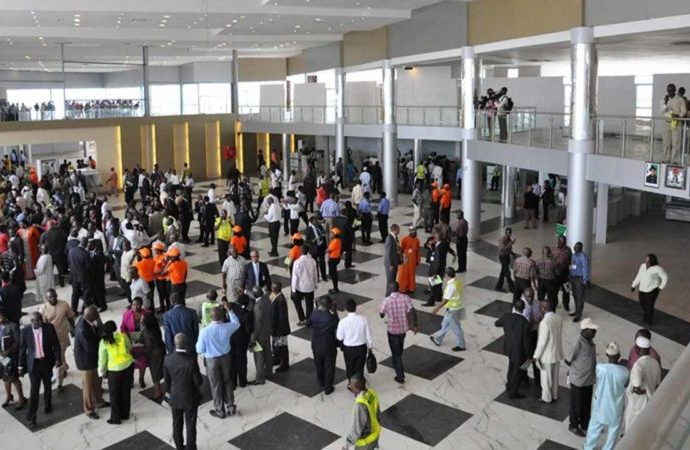 The Federal Government has assured Nigerians of its readiness to strengthen surveillance at five international airports in the country to prevent the spread of Coronavirus.

The five international airports are in Enugu, Lagos, Rivers, Kano and the FCT.

The Minister of Health, Osagie Ehanire, who disclosed this at a news conference on Tuesday in Abuja, said the government would also set up an inter-multisectoral committee to scale up surveillance and vigilance.

According to the minister, the committee will help to scale up surveillance to detect suspicious cases and ensure containment.

“The committee shall comprise of critical stakeholders in the health, security, aviation and transport sectors and also include development partners, bearing in mind that air travellers are more likely carriers of the virus.

“Attention will be given to five international airports to ensure that the point of entries are monitored and the ministry is working to forestall the importation of coronavirus to the country.

“The risk of importation is possible in all countries. However, the ministry wishes to assure all Nigerians that the capacity to detect, access and respond to this and other public health challenges are put in place.”

The minister said that in addition, the Nigeria Centre for Disease Control (NCDC) had set up a coronavirus group and was ready to activate its incident system for coronavirus if any case emerged in Nigeria.

According to him, NCDC is currently receiving the World Health Organisation (WHO) advisory to countries and agencies on surveillance and response.

“The collaborative engagement will not attain success without the support of state governments, particularly states hosting international airports.

“The ministry is finalising a plan to engage authorities of those states to enhance surveillance and response in their domains.’’

Mr Ehanire, therefore, urged airlines to comply with protocol on any passenger who took ill or looked ill on board to be reported by authorities.

He also urged airlines and the public to call stipulated lines at the airports’ entries to share any information on the virus and gave the telephone numbers as 09092996283; 08095553232.

While fielding questions from journalists on the capacity of Nigeria to handle the virus, the minister said that the country had good laboratories for testing suspected samples.

“Our laboratory testing skill is increasing and you will need reagent for any test but we do not have regent for the virus; WHO will advise countries where to send samples to,’’ he said.

In her remarks, the Director of Port Health Services in the ministry, Morenike Alex-Okoh, said the ministry would further work with state governments for containment.

She added that “for those cases that will not manifest at ports, it is very important to engage the states, while the states are expected to ensure social mobilisation to sensitise people on the need to go to a health facility.’’

Also, Joshua Obasanya, the Director, Prevention and Programme Coordination, NCDC, said that the centre had been collaborating with Chinese authority in Nigeria to ensure that citizens that travelled for holiday to that country delay their coming.

He said, “we had a meeting with Chinese authorities; they have agreed to work with us.”

First identified by Chinese researchers with the pathogen behind a mysterious illness that had sickened 59 people in Wuhan, Hubei in 2019, a city of 11 million in central China, coronavirus is a group of viruses common among animals but now confirmed that it could also infect humans.

The large family of viruses can cause diseases ranging from the common cold to Severe Acute Respiratory Syndrome (SARS).

The disease has spread to Chinese cities, including Beijing and Shanghai, as authorities of that country confirmed 1,975 cases of the new coronavirus, while the death toll from the virus rose to 56.

It had also spread to the U.S., Thailand, South Korea, Japan, Australia, France and Canada.