Nigeria Not The Best Team In Africa – Gernot Rohr 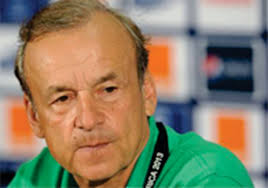 Nigeria coach Gernot Rohr said it is hard for his team to win the 2021 Africa Cup of Nations because they are not the best team on the continent.

The German tactician recently agreed to a two-and-a-half-year deal to continue his work as the handler of the three-time African champions, putting to bed speculation around his future.

On Wednesday, the President of the Nigeria Football Federation (NFF) Amaju Pinnick revealed the conditions in the new contract which include a mandate to qualify the country for the 2022 Fifa World Cup in Qatar and also win the next Afcon in Cameroon.

The 66-year-old guided the Super Eagles to a third-place finish in Egypt last year, however, he disclosed that the new target might be difficult to achieve.

“When you go to a tournament it is to win it,” Rohr told BBC Sport.

“We finished third in the last one, and everybody wants to progress. But we know also that it is very difficult to win this tournament because we are not number one in Africa.

“But it is good to have these milestones and ambition.”

Aside from the competition targets, he is also expected to reside in Nigeria and receive his salary in local currency (naira).

Rohr, who previously coached Gabon, Niger and Burkina Faso before joining the Super Eagles, said he understands the risks that come with the new contract.

He is also confident the squad he’s raised is capable of helping him to get the job done.

“My contract all the time is a risk because it is finished when we are eliminated from a competition – whether the Afcon or World Cup,” he added.

“I took the risk already when I arrived, and it is still the same. But I am very optimistic, because now we have a team which is playing good football and I have confidence in my players.”

The German succeeded Nigeria legend Sunday Oliseh at the helm of the Super Eagles in 2016.

He helped the country qualify for the 2018 Fifa World Cup in Russia but they failed to progress past the group stage after defeats to Croatia and Argentina.

Nigeria Not The Best Team In Africa – Gernot Rohr was last modified: May 29th, 2020 by Damilare Salami

REVEALED: How Ekiti State Made N2m From Lockdown Rule Violators