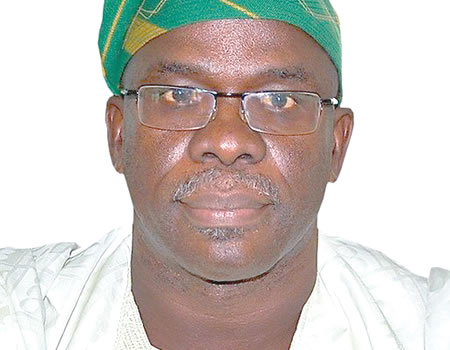 The Ogun State Commissioner for Culture and Tourisim Bashorun, Muyiwa Oladipo has made his intention known to contest the 2019 Ogun gubernatorial race. Bashorun Muyiwa who was a one time Speaker of the Ogun State House of Assembly is a seasoned politician and he says he is the man to beat come 2019.

On why he decided to join the race, he explained that its because he sees himself as the oldest aspirant, which is more considered as being the most qualified, “I started nursing the ambition since 1976, the day the state was created. Ogun State and  I share the same birthday (3rd of February), that day I told my father that I will rule the state some day. Ever since I have been watching and monitoring. I now believe that that time is here to assume the seat having gone through the necessary tutelage.

Having been speaker of the House between 1999- 2003 ,Commissioner of Local Govt and Chieftaincy Affairs 2011- 2015, Commissioner of Culture and  Tourism 2015 till date. Before  then I had been contributing my quota through  my constituency especially during SDP/NRC days under IBB.

Moreso I have  always admired Chief Obafemi Awolowo as young as I was and also liked helping people, so I believed that the best way to achieve that is to go into politics.

What effort has he made to let people of Ogun know that he has joined the race?

We have been informing and sensitising as much as possible . Very soon we will come out for declaration, but I can assure you work is going on underground.

In his quest for higher academic pursuit, he was admitted to University of Lagos, Akoka, Lagos, in 1981, where he pursued a course in history in the department of Arts and Bagged Bachelor of Arts (Hons) history in 1984. His determination to further broaden his knowledge and understanding, Olumuyiwa Oladapo proceeded to Ogun State University, Now Olabisi Onabanjo University, Ago- iwoye Where he studied law and obtained his Bachelor of Law (LLB) degree in 1989. He became a Barrister at Law (BLS) after his one year at law school, Ikoyi Lagos, Nigeria in 1991.

His working experience started with his one year compulsory National Youth Service Corps (NYSC) at the Nigeria Customs and Excise, Area 1, Port Harcourt, Rivers State from 1984-1985. In 1985, he began his working career at H.F.P. Engineering Limited, Victoria Island , Lagos and left in 1986.

In his bid to be self-sustaining, having garnered a lot of professional  experience, he established his own chamber, called, Muyiwa Oladipo & Associates, Solicitors & Advocate in Lagos, but now at No,58, Oke-Yeke NUD Road, Abeokuta, Ogun State. He is a member of the Nigeria Bar Association, Ikeja Branch.

He was also at various times a member of the Social Democratic Party (SDP), during the regime of former President Ibrahim Badamosi Babangida, the party later metamorphosed into the Alliance for Democracy (AD) after the annulment of June 12 Presidential elections in 1993.

A man of many parts, Olumuyiwa Oladapo Oladipo began his political career as a member of the youth wing of the then Unity Party of Nigeria (UPN),Ogun State branch, he as a member of Alliance For Democracy won on the party’s platform a seat into the Ogun State House of Assembly to represent Sagamu II State Constituency and was elected the speaker of the House of Assembly.

In recognition of his contribution at improving the lots of people in his immediate and remote communities, he was adorned with series of awards, some of which were: Basorun, Oke-Ado, a chieftaincy Title in Ijebu in 2001, Distinguished old Student AWARD, by   Adeola Odutola College Old Student Association (AOCOSA) in 2000 and Millennium Gold Award as High Commissioner for Justice and Peace of the International Youth Congress, Brussels, Belgium in 2000 to mention just few.

He was a strong member of the All People’s Party (ANPP) in 2007, When Senator Ibikunle Amosun (FCA) contested as Governor, won but was robbed of victory. He was a member of the Ogun State Contact Committee on party Membership in 2010 and also a coordinator of Sagamu- Remo Axis for 2011 Governorship/ House election.

He as Commissioner for Culture and Tourism,  Ogun State organized and hosted the first ever Nigeria Drums festival (first in Nigeria and Africa) which is now known as Africa Drum Festival having assumed a world festival status.

He is happily married and blessed with children. He is a versatile politician who enjoys traveling and receiving people.