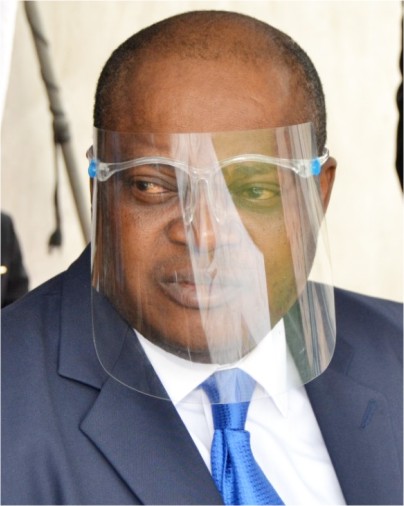 It is with great delight that I am standing before this gathering today to mark the beginning of a new era in the social-economic development of Ososa town, the birthplace of that legendary icon of the theatre in Nigeria, Chief Hubert Adedeji Ogunde of blessed memory. I thank the Almighty for giving us the grace and opportunity of being part of the history that is being made today with the commissioning and handing over of a building which will serve as the Customary Court, Ososa.

Pursuant to the above objectives. I directed the Chief Registrar to undertake a tour of all the forty-six (46) Customary Courts in Ogun State so as to have an on the spot audit of the state of the courts in terms of their buildings and facilities. I am glad to inform this gathering that the Chief Registrar and her team have completed the assignment, they visited all the Customary Courts in the State-from Ipokia to Ijebu-Igbo, Abigi, Imeko-Afon, Aiyepe, Odeda, Owode-Egba, Igbogila, Ado-Odo/Ota, Agbado, just to mention a few and a comprehensive report has been submitted to my office. We are presently studying the Report and hopefully, in not too distant future, the positive effect of that effort would manifest not only on the environment in which justice is dispensed but also in the area of access and quality of justice delivery.

I seize this opportunity to thank the Governor of Ogun State, His Excellency, Prince (Dr.) Dapo Abiodun MFR, for his continued support for the Ogun State Judiciary and for making the Judiciary an important component of the Building Our Future Together Agenda of his Administration. We trust we can continue to count on the support of his Administration.

I also wish to most sincerely appreciate My Lord, the Honourable Chief Judge of Ogun State, Hon. Justice M.A Dipeolu, FICMC, for providing effective leadership in the Ogun State Judiciary. The vision of the Hon. Chief Judge, captured in the Seven Point Repositioning Agenda of his Lordship’s Administration has resulted in several innovative developments being witnessed in the judiciary. At the core of the Seven Point Repositioning Agenda is His Lordship’s determination to make the Ogun State Judiciary an Institution that is driven by technology, and with Zero Tolerance for Corruption.

The Hon. Attorney-General and Commissioner for Justice, Mr. Akiingbolahan Adeniran deserves our appreciation too. Mr. Adeniran has brought his abundant knowledge and experience to bear on his duties as the Chief Law Officer of the State. I should not fail to mention the Esteemed Commissioners of the Ogun State Judicial Service Commission, for their diligent work in advancing the course of administration of Justice in our dear State.

Back to the present. We are gathered here today to rejoice with the Kabiyesi HRH Oba Adetoye Mojeed Alatishe, the Gbegande of Ososa who on the occasion of his 10th Coronation Anniversary has donated this building on behalf of Ososa Community, to the Ogun State Judiciary to serve as the Customary Court, Ososa. Let me publicly acknowledge that Oba Alatishe visited the Ogun State Judiciary Complex and the Office of the President of the Customary Court of Appeal in the build-up to this commissioning. He worked tirelessly to see that this building was completed and furnished to a standard befitting of a court of justice in this community and its environs as residents will no longer need to travel all the way to Ijebu-Ode to be able to access justice. On behalf of the Hon. Chief Judge of Ogun State, all the Honourable Judges, Management and Staff of the Ogun State Judiciary. I congratulate all sons and daughters of Ososa and Kabiyesi Oba Alatishe on this auspicious occasion and wish him many more years of peaceful reign on the throne of his forefathers. I pray that many developments shall be witnessed in Ososa in your time.

I must equally thank all the stakeholders in Ososa Community who by their contributions in cash and kind, have made it possible for this Court project to become a reality. It is a large Court Hall which has been furnished with offices for the President and Members as well as the officers of the Court. Information at my disposal has it that all amenities required for the comfort of the members and officers of the court have been provided.

The Customary Court of Appeal has just recently engaged staff who will be posted to Customary Courts across the State to ensure that the pace of work does not slacken or suffer as a result of understaffing.

In conclusion, let me acknowledge the co-operation and support of the Honourable Judges of the Customary Court of Appeal, the Chief Registrar and her Deputies, as well as other officers and staff members of the Customary Court of Appeal, with whom I have been piloting the ship of that court since its inception. I look forward to more robust collaboration and co-operation as we discharge the onerous duties placed on us.

Once again, thank you and God bless.

Speech Delivered By The President Of The Ogun State Customary Court Of Appeal Hon. Justice Mobolaji A. Ojo At The Commissioning Of The Customary Court, Ososa On Thursday 6th Of August, 2020.

‘He Was A Trusted Loyalist’, Bayo Adelabu...