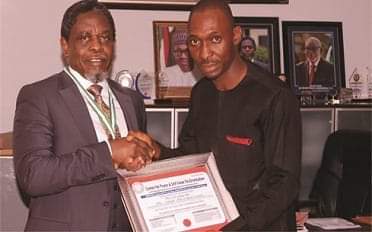 The Ondo State Ministry of Finance under Gov. Rotimi Akeredolu-led administration has been declared the best among the state’s Ministries of Finances in the South-West of Nigeria.

The Executive Director, Center for Peace and Self Value Re-orientation, Mr Oyibo Abraham disclosed this during the induction and presentation of 2019 integrity stewardship award to the state Commissioner for Finance, Mr Wale Akinterinwa in Akure, the Ondo State capital.

Abraham, who led a delegation to pay a courtesy visit on the commissioner said:” For scoring 80% cumulatively in ten sectors of assessment, Akinterinwa has been declared as ‘an outstanding leader in service”.

He noted that the commissioner has displayed an ethical leadership, Development policy performance, public accessibility, servicom compliance, Commitment to start government transformation agenda, attitude against corruption and obedience to the rule of law.

While condemning any leader that has no respect for the rule of law, the youths and the poor masses, Abraham charged Akunterinwa to ensure that there is adequate policy framework in harnessing and developing economic policies of the state

This, he noted will guarantee the obedience to the rule of law and the enhancement of economic and social welfare of the citizenery.

Abraham who appreciated the commissioner for thinking right, acting ethically and serving as an advocate of good governance described his organisation as resolute, determined and committed to an ideal of democracy.

In reaction, the state Commissioner for Finance, Mr Wale Akinterinwa appreciated the organisation for recognising him and his ministry including the state in particular

Akinterinwa attributed the ministry’s excellent performance to Akeredolu led administration which he said has created an enabling environment for the civil servant to perform their duties diligently.

He said the state and the Ministry, in particular, will not relent in an excellent performance in ensuring that corruption is eradicated out of the system.

The Permanent Secretary. Mr Gbenga Adelayi who was in Attendance noted that the state is managing whatever comes from the federal allocation to ensure that dividends of democracy get to the grassroots.

The commissioner was not only inducted as ” Service Ambassador” but was also presented ” Certificate of integrity stewardship” and declared as ” An outstanding leader in service”.