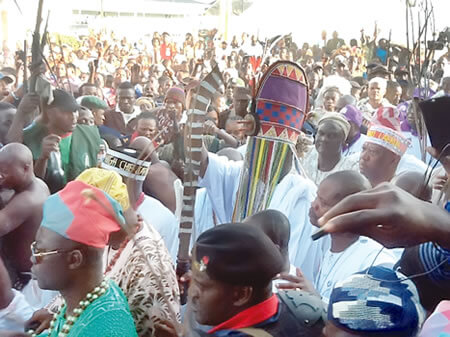 The annual Olojo festival celebrated amidst funfare and glamour reached the climax, on Saturday, in Ile-Ife, as the Ooni of Ife, Oba Adeyeye Enitan Ogunwusi emerged from the Emese court within the Ile Oodua, donning the historical Are Crown.

Olojo festival, which will be the second the monarch would be celebrating on the throne, was witnessed by a mammoth crowd of traditional worshippers, eminent Nigerians and other dignitaries from all walks of life.

Before Oba Ogunwusi emerged with the “Are Crown, which is believed to weigh about 80 kiligrammes, around 5.35 p.m., he had earlier received the procession of Ogun, Sango, Osun worshippers and adherents of other deities, who filed out in the frontage to pay traditional homage.

While monitoring Olojo festival, Sunday Tribune gathered that members of the Oodua Peoples Congress (OPC), traditional groups and Ife  chiefs converged on the palace to add colour and glamour to the event.

Our correspondent also gathered that a number of pigeons were offered as sacrifice to appease the gods and other rites  performed before Oba Ogunwusi came out through the Emese court, putting on the age long Are Crown.

Accompanied by some palace chiefs and eminent indigenes of Ile-Ife, including the former deputy governor of Osun State, Senator Iyiola Omisore, Oba Ogunwusi was sighted waving at the crowd that struggled to catch a glimpse of the monarch as he moved to Oke Mogun shrine to perform some rites.

At the Oke Mogun shrine, Oba Ogunwusi prayed for peace and socio-economic development of Yorubaland, Africa and the entire global community.

Before the grand finale of Olojo festival on Saturday, Oba Ogunwusi had observed a seven-day seclusion rites preparatory to the adorning of the popular Are’ crown.

This Is What Happens To The Human Body Without Sex