Oops! Did Obama just reveal the gender of Jay Z and Beyonce’s twins? 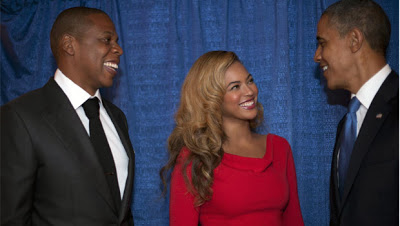 The immediate past US President Barack Obama, may have accidentally revealed the gender of Jay Z and Beyonce’s twins while congratulating Jay-Z for being inducted into the songwriters’ hall of fame.
Obama said:

“I like to think Mr. Carter and I understand each other. Nobody who met us when we were younger men would have expected us to be where we are today”.

Then he went ahead and listed the similarities between himself and Jay Z saying:

“We both have wives who are significantly more popular than we are… Like all of you, I am a fan, and I’ve been listening to Jay since I was a young and hungry state senator.”

“Jay and I are also fools for our daughters. Although, he’s going to have me beat once those twins show up.”

We all know Barack Obama has 2 daughters, so if Jay Z is going to have him beat once the twins show up, that means the Carters are having twin girls. Right?

Oops! Did Obama just reveal the gender of Jay Z and Beyonce’s twins? was last modified: June 17th, 2017 by Reporter