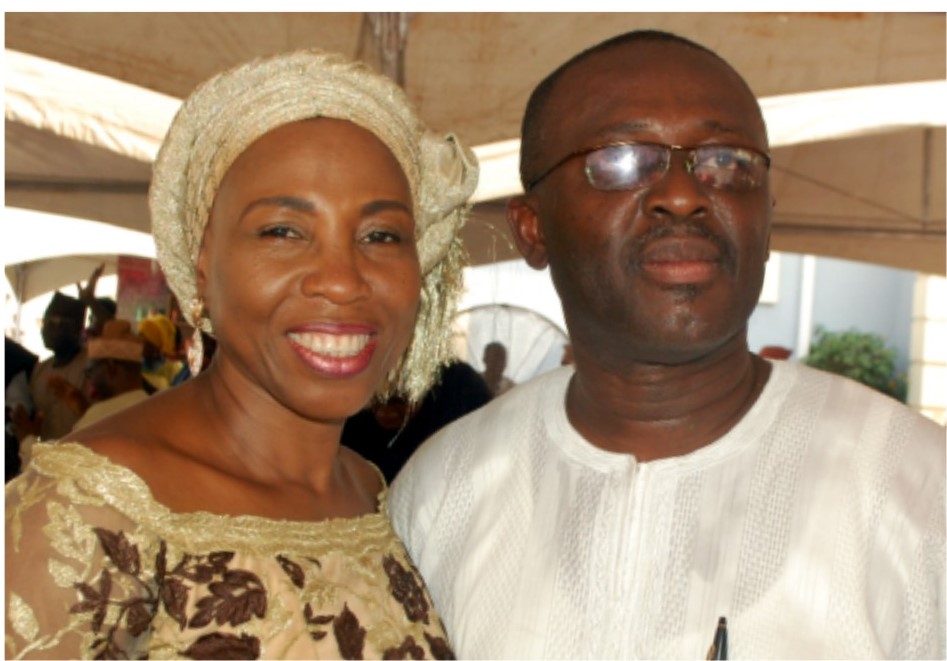 •As SAGAMU Goes Agog For The Popular OGUN Politician

More hard work they say is the reward for hard work. But when success smiles at you as a result of working hard and smart, the result often brings a sense of satisfaction. Such was the story of Mr Opeyemi Agbaje, a Sagamu born businessman, lawyer, politician, economist and strategist who held his housewarming ceremony in Sagamu his hometown on Saturday, February 9, 2018. It was a memorable day for everyone in attendance, starting with a conducive weather for all who travelled far and near, down to enjoyable delicacies and maximum entertainment from the turntable of the DJ down to the several rib cracking and tension easing jokes from the anchor of the day. City People Magazine’s DAMILARE SALAMI was there, and as usual he brought back a juicy report. Below are gists from the event.

Mr Opeyemi Agbaje’s palatial bungalow is not just an expression of affluence; it is a simple description of taste, quality, class, beauty and style. Situated in the heart of Sagamu, the mansion is very spacious, beautifully designed with porcelain tiles. At the back of the house is a well structured swimming pool to ease tension and exercise the body. The frontage of the building houses a spacious car park, garden a storey building meant for the security of the entire compound at the gate of the house.

He is popular among party rockers in Ogun state, DJ Candy whose real name is Soremekun Oluwole Olalekan never fails to make his lovers ask for more whenever he is on the wheel of steel and that’s why he is loved by all. He repeated the same high level of performance at the housewarming ceremony of Mr Opeyemi Bamidele.

At about 2:00 pm that Saturday, exhilarating sounds had started to greet the air as guests were trooping in one after the other but in their numbers to the venue of the event. From start to finish, DJ Candy was found meeting the insatiable demands of his audience for good music. One thing that was uncommon with his performance compared to other DJs was his ability to satisfy his vast audience; supplying songs across genres, ranging from the current trends, to oldies, gospel and even unexpected Apala music.

At the end of the event, DJ Candy received handsome cash gifts as a reward for satisfactory show from some of the well-meaning guests whom he had thrilled with his performance.

Pretty diva Adebola Solate popularly known as Fine face was the anchor of the day. The Sagamu born star was simply a perfect match for the event as a blend of Ijebu dialect, Yoruba and English languages flowed from the light skinned damsel to guests. Her jokes, crowd control and flow with DJ Candy added glamour to her five star performances on an evening where different politicians, royal fathers and famous sons and daughters of Sagamu gathered to celebrate one of their own.

Six royal fathers honoured Mr Agbaje. Their love for the iconic businessman and lawyer was obvious as they all freely shared warm embrace with him and heartily prayed for him and other sons on the soil present. Leading the team of the royal father was His Royal Majesty, Oba Babatunde Adewale Ajayi, the Akarigbo of and paramount ruler of Remoland. Others are HRH Oba Adeyinka Onakade, Moruwafu 1, Alakene of Ikene, Oba M.S.L. Gisanrin, the Odofin of Sanyindo Sagamu, Oba (Barr) Solagbade Tijani, the Alado of Ado Sagamu, Oba Muftau Adeoye Sanni, the Aminisan of Oko, Sagamu and Oba Kazeem O.A. Gbadamosi, the Ologijo of Ogijo.

A sound sudden caused a breaking in transmission as DJ Candy was serenading guests with oldies tunes. Everyone turned back to have a glimpse of what it was, alas, it was an announcement of the arrival of the Akarigbo of Remoland, HRM, Oba Babatunde Adewale Ajayi. His arrival was indeed royal and grand as his entourage rally round his Rolls Royce car while others got his umbrella before Kabiyesi alighted. Though dramatic, Kabiyesi’s arrival was a pleasant scene that added glamour to the already interesting event; the youths and children there learnt to appreciate Sagamu’s cultural heritage, a lesson well learnt.

Before cutting the tape, Kabiyesi took his time to pray for Mr Agbaje and appreciated him for deeming it fit to bring further development to Sagamu by constructing such a magnificent edifice in his hometown. He encouraged others to emulate such an attitude so that Sagamu can become the great nation that it truly is.

Unknown to many, Mr Opeyemi Agbaje is an alumnus of the prestigious Igbobi College in Lagos. Members of the ’76, 81 and 83 sets of the college were present also, to celebrate one of their own. Their table was filled with highly respected and successful Nigerians in different walks of life.

The high point of their presence at the event was occurred when they took everyone by surprise by demanding to take a special number for ‘Ope’ as the celebrant is fondly called by his peers. They indeed took a special number and all Igbobi alumni members present took part in it, including the celebrant himself, Mr Opeyemi Agbaje. They took themselves down the memory lane by singing one of the stanzas of the Igbobi college anthem. Thhough funny to other guests, they enjoyed themselves and this was visible in the smile that greeted their faces and the cheers they gave one another after the anthem.

The celebrant’s wife, Mrs Toyin Agbaje wore a beautiful outfit. She was dressed in a gold colour attire with a matching head gear and shoes. Mrs Agbaje in her smart looking outfit appeared so smart that anyone would have thought she was among the VIPs. Not minding her beautiful look, she ensured that the vendors did their jobs excellently well such that every guest was satisfied. One could tell from the kind of pleasantries and accolades she received from the guests as they took their leave one after the other.

The National Association of Polytechnics Students (NAPS), made the day more memorable for Mr Opeyemi Agbaje as they presented him with an excellence award for his outstanding leadership skills he has displayed overtime. Delivering his acceptance speech, Mr Agbaje said he would have not accepted the award but for the source it came from. He further said he feels so appreciated and valued as his mentorship efforts are being recognised. He seized the privilege to also thank everyone who made the event and prayed that they will all have remarkable successes too.

Present at the event was Oba Babatunde Adewale Ajayi, the Akarigbo of and paramount ruler of Remoland. Others are HRH Oba Adeyinka Onakade, Moruwafu 1, Alakene of Ikene, Oba M.S.L. Gisanrin, the Odofin of Sanyindo Sagamu, Oba (Barr) Solagbade Tijani, the Alado of Ado Sagamu, Oba Muftau Adeoye Sanni, the Aminisan of Oko, Sagamu and Oba Kazeem O.A. Gbadamosi, the Ologijo of Ogijo.