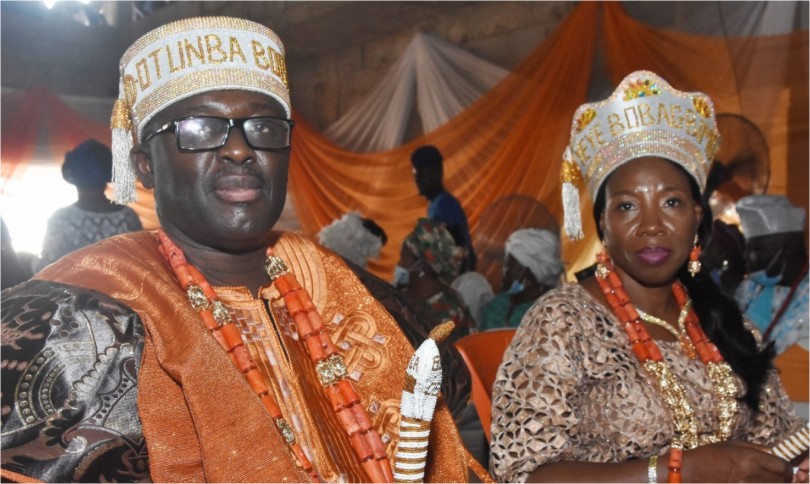 The palace of Ologijo of Ogijo Remo, Oba Kazeem Olaonipekun Gbadamosi received men of timber and caliber on Wednesday, February 10, 2021 as the CEO of Ogun State Security Trust Fund, Barrister Opeyemi Olukayode and his wife, OluwatoyinAgbaje became the Otunba and Yeye Bobagbimo of Ogijo-Remo in Ogun State.

The event which took place in commemoration of the 4th coronation anniversary of the Ologijo of Ogijo, HRH Oba Kazeem Olaonipekun Gbadamosi placed Ogijo Remo on another pedestal as it received not just guests but people who have the potential to turn the fortunes of the community around in no time.

To say the event was classy is to undermine the person Otunba Opeyemi Agbaje. Everyone who knows him knows that he is a man of class and style. Did he let anyone down? Absolutely not. Starting from his Louis Vuitton shoes down to his dansiki, soro and abetiaja cap, his style spoke volume and class. And to leave Yeye Bobagbimo Toyin Agbaje out of the fashion, class and style talk is to undermine the efficacy of the main player. Yes, Otunba Agbaje revealed that she was the secret behind all his styles.

The event made a working day look like an owambe Saturday but those in attendance had fun and value for their time. City People’s DAMILARE SALAMI 08155134152 Head of Photography Department, FEMI ADELEKE were present there and they bring you intriguing stories and beautiful pictures from the event, enjoy.

To start with, an event of this magnitude should live up to its standard in terms of personalities in attendance. Did it, you be the judge but let me quickly tell you that we almost lost count of the royal fathers in attendance from various part of Yoruba land. Starting with Oba Timothy Oyesola Akinsanya, The Ewusi Makun of Sagamu kingdom, the Elepe of Epe, Oba Adewale Osiberu, HRH Oba Adewale Osiberu Basibi, the Alaperu of Iperu, Oba Adeyinka Oyetade, the Alakene of Ikene, Oba Jamiu Olalekan, the Onigodo of Igodo, Oba Oyewole Oyediran, the paramount ruler of Yakoyo kingdom in Osun State, the Asiwaju of Remoland, Dr S.K Onasowapo, Dr Adeleke Adedoyin, the list is endless.

The scourge of the dreaded COVID-19 pandemic acted as a check for all the guests. Virtually everyone in attendance wore their face masks correctly while many others also had their hand sanitizers for personal use. Aside from that, there was proper spacing of chairs for the purpose of physical distancing. The organizers gave little or no room for the transmission of COVID-19.

Rich cultural display always adds colour to an event of this kind and it was displayed both in words and action. Starting with the anchor, Olakitan Adegoke, a popular radio host on Tungba FM, he beautifully crafted his use of language to suit the purpose of gathering and selling the riches in the Yoruba language to all those who appreciated it. He was also able to blend and carry his diversified audience along. Knowing fully well that some of the guests were non-Yoruba speaking, Olakitan switched perfectly between Yoruba and English languages each time a need arose.

Everyone expected to hear from Kabiesi, HRH Oba Kazeem Gbadamosi on the importance of the event and why Otunba Opeyemi and Yeye Oluwatoyin were selected from among many choices. To start with, Kabiesi revealed that one thing that qualified Otunba Opeyemi Agbaje with his wife was the vast experience he possessed in the private sector. Oba Gbadamosi has as the topmost on his agenda, capacity development for the people of Ogijo and most especially the youths and Otunba Agbaje fits perfectly into that role of helping out.

We have started empowering people, we have held vocational training for over 2000 people in the last year and we have fully equipped over 200 in various vocations. We are also mentoring and monitoring them so as to ensure that they achieve the purpose the programme intends to serve.

OtunbaAgbaje and his wife are true sons of Remoland and I am certain that this being their first chieftaincy title will open doors for more to come in Remoland and beyond. With him and his wife, we are sure of achieving more for the youths of Ogijo land. He has been doing it in the background but there is a need to bring him to the fore. We are all aware of his contributions to the development of Sagam, Remoland and Ogun State in general. All I can do is to pray that God grants him the strength to do more, he concluded.

Amidst local drums, gongs and vibrating sounds, Otunba Opeyemi and Yeye Oluwatoyin landed at the palace of Ologijo of Ogijo Remo looking like royalties. Their outfits stood out among the crowd as they lead an entourage into the auditorium. Accosted by the traditional singers at the entrance of the auditorium, Otunba and Yeye Agbaje displayed their dancing skills before heading to their exalted seats placed in front of the royal fathers in attendance.

As culture and tradition would have it, the Apena of Ogijo Remo, chief Taiwo Olayinka was responsible for leading the traditional rites to be performed before the official pronouncements will be made. Without any delay, Chief Taiwo who had prepared all the necessary ingredients like beads, crown and staff of office wasted no time in doing the needful before handing over to Oba Gbadamosi who would complete the process.

Officially declaring the new chiefs was the function of the Kabiesi in charge. This, Oba Gbadamosi did with a pure expression of delight and satisfaction. After the Apena had held a hitch-free rite, Kabiesi mounted the podium to hand over the crown and staff of offices to Otunba Bobagbimo Ogijo-Remo, Barrister Opeyemi Olukayode Agbaje and Yeye BobagbimoOgijo-Remo, Chief Mrs. Oluwatoyin Agbaje and afterward declared them official title bearers.

It is no longer news that Otunba Opeyemi Agbaje is the Patron of Egbe Obayori ObinrinAkile Ijebu. This group of young, charming and captivating ladies came in large numbers to show love and support for their patron. Among the crowd at the event, they stood out. They were the most stylish guests present. They all wore different shades of white lace and royal blue gele. Any young lady at the event would wish she was a member of this society, of a truth, they stole the show.

The reception took off immediately after the coronation rites had been completed. There was no need for anyone to go through any stress. Seats had been spaciously arranged to give room for COVID-19 protocols while beautiful sounds were oozing out of the speakers as guests were getting set for a real-time entertainment and showdown.

BISHOP SAMSON MUSICAL ON THE BANDSTAND

This awesome, energetic and talented singer and his band were just a perfect match for the event. Samson Akinyemi brought out another life entirely to the event. Have you ever seen a royal father dance at an event? The music must have done the magic. This was what the Bishop Samson Musical did at the event. Royal fathers took turns to have a fair share of the good music.

Many people don’t know that the serious Opeyemi Agbaje is a good stepper. When you hear good music, it literally brings out the dancer in you. That was the case of our new Otunba Agbaje. The music made him dance well. Not that alone, his guests came to spray him and the new Yeye Bobagbimo.

One of the memorable moments at the event was when Oba Kazeem Gbadamosi stormed the dancefloor to spray his new chiefs some cash. Kabiesi did it in style. He didn’t just do that to his chiefs alone, as a father of all, he sprayed everyone on the dancefloor. That is unprecedented, isn’t it?

These ladies sure know how to have fun. They practically took over the dancefloor when they stormed there. Their number had been intimidating all day long and when they eventually had the opportunity to spoil their patron with cash gifts, they explored it to the fullest.

READ ALSO: THE LOVE STORIES OF CELEBRITY COUPLES WE ADMIRE

The Love Stories Of Celebrity Couples We Admire

Why I Spent Over N10m On Widows, To Mark My Birthday – RevolutionPlus Property MD’s Wife, TOLU ONALAJA