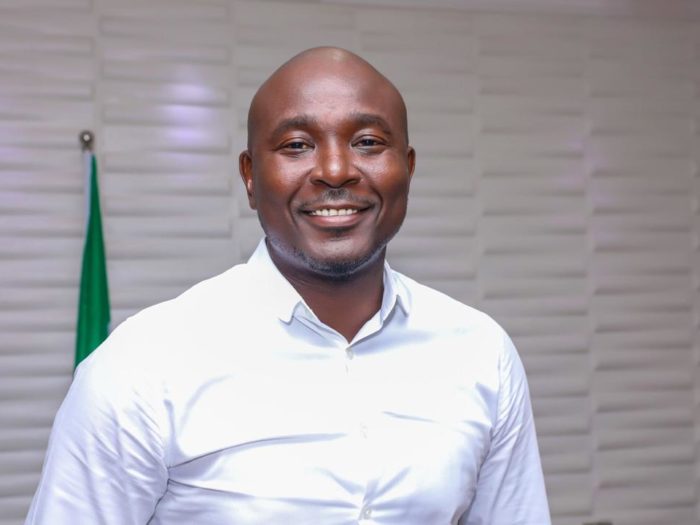 Ibadan, the capital city of Oyo State, was agog on Friday 22nd November, 2019, as the popular businessman and House of Reps member Hon. Akin Alabi and siblings buried their late father, Chief Aderiran Alabi, in a grand style. The rite of passage kicked off on Wednesday 20th November, 2019, with a Service of Songs, at the deceased residence, Plot 3, Ayedun Layout, Opposite Nigeria Breweries Junction, New Ife Road, Ibadan.

It was indeed a convergence of the who is who in the society, as Nairabet boss Akin Alabi and siblings gave their late father a befitting burial. They made sure there was no stone unturned as to have a successful, colourful event.

Everything about the party was just classy; the branding, decoration, entertainment of guests and all. City People Magazine’s crew made up of SUNDAY ADIGUN, DARE ADENIRAN and WALE OSANTINTOLA covered the 3-day event and thereby present to you some gists from the party. Read on.

According to Christian burial tradition in which the wake is usually organised for the dead, The wake in honour of Chief Adediran Alabi took place on Thursday 21th Nov, 2019 at family residence, Plot 3, Ayedun layout opposite Nigeria breweries junction, New Ife Road, Ibadan. . It was a path for the children of the deceased to begin the process of bidding their dad, whom they obviously held in esteem, farewell. The atmosphere was completely sombre for the event that started at 4:00 pm. Family members and very close friends of the deceased’s children were in attendance while it lasted.

The following day, 22nd Nov, 2019, before the remains of the departed, Chief Adediran Alabi were buried inside the church, The Cathedral St Peter Aremo Ibadan’s cementary, to be committed to the mother earth, a church service was held at the same church in the morning and the officiating ministers who were on ground, prayed for the repose of his soul, while they interceded on the family’s behalf for fortitude to bear the irreplaceable loss. After the church service, the corpse which was in white glossy casket was ferried by the undertakers into a hearse as its journey to its final resting place began.

After the burial at The Cathedral of St. Peter, Aremo, the ceremony moved straight to the reception venue at Liberty Stadium Ibadan, where a classy reception was scheduled to take place. What unfolded at the reception was more than just classy.  It was glamorous and posh. Beautiful women dazzled in the 2 Ankara Asoebi, while some dazzled in Sequence lace. It was a carnival-like party; very colourful. Over 6000 guests wore the 2 Blue with touch of white Ankara Aso ebi, Foods were served accordingly, and it was complemented with assorted wine and drinks of choice.

ABOUT THE RECEPTION VENUE; DEXTERITY DID WONDERS

There is no doubt in the fact that it is only a stadium that could have contained the amount of the crowd late Chief Adediran Alabi’s burial ceremony attracted. But despite the reception venue being an open space, the arena was perfectly managed with branding and exclusive decoration, giving  the whole party the beauty event of such magnitude deserved. One couldn’t but amazed at the elaborate decoration and the artificial grass laid at the VIP section towards the stage, just like well-cut lawn and demarcated with beautiful flowers. It was a lovely beauty to behold. As guests  were seated under three gigantic canopies erected, where some part of one was carved out for VIP.

As expected of event such magnitude and due to personalities involved; Akin Alabi being a politician and a successful businessman and his siblings too, there was a large turnout of prominent politicians, business gurus, political leaders, artisans and party loyalist. In fact, the part could best be described as a carnival. So much that the security personnel at the venue find it a little bit difficult in controlling the crowd.

One can not but imagine that the very conservative and no nonsense Quilox boss, who is also Representing Iseyin Itesiwaju Kajola Iwajowa federal constituency, Hon. Shina Peller could be so accommodating and receptive. One can also tell that there is a mutual relationship, a very close one between him and Hon. Akin Alabi as he was very much on ground, supporting the family right from the day the event started. He played a big host to many guests. In fact if you don’t know the children of the deseaced well enough you can easily mistake him for one of the children.

No one does it better than the King himself. King Sunny Ade as usual performed to the amazement of guests at this classy occasion. Many qualities the King was known for were on displayed at this event, but what many never envisage was the comic act side of the King of Juju himself. Seeing him mimicking the MC was fun and funny to all the guests. This display got many people attracted to him the more and it turn out to be a great night for all the guests, family, friends and well-wishers.

Former CBN Deputy Governor and the Parakoyi of Ibadan land, Chief Bayo Adelabu, popularly known as ‘Penkelemesi’, was one of the high flying celebrities who dazzled at the party. He came with a powerful delegate, among whom are the Ex-international table tennis star, Chief Waheed Ekun; younger brother of the immediate past governor of Oyo State, Alhaji Wasiu Ajimobi; popular actor, Muyiwa Ademola and others. In fact,  his entry into the party caused a kind of commotion, as his fans and political loyalists were hailing and cheering him. Recall he contested in the state’s last guber election, under APC and lost to PDP’s candidate, Engr. Seyi Makinde. Adelabu, however, seems to be battle-ready and hoping for better days ahead, as he takes his case, challenging Governor Makinde’s victory, to the Supreme Court after Appeal Court stance. That really showed in his disposition at the party, as he greeted round, the important personalities at party.

The Ogbomoso-born politician and a third term honourable, representing Surulere/Ogo Oluwa Federal Constituency in the House of Reps and another Federal representative from Ibadan North Federal Constituency, Hon. Olaide Musliudeen Akinremi, popularly known as ‘Jagaban’, sure have some things in common. Apart from the fact that they belong to the same political arty (APC), they are both grassroot politicians and successful businessmen. They sat together, alongside other top celebrities, at the party.

…… SEMITE AND SHEFIU BABATUNDE TOO

Both Semiu Adenekan aka D.J SEMITE and Option 24/7 Night Club & Lounge boss, Shefiu Babatunde play big in the entertainment sector in Ibadan. They are stylish and sociable men with impressive connections across different sectors. D.J SEMITE is into entertainment equipment; stage, lights etc, while Shef runs Options. They both came to support the Alabis.

Though the Olubadan of Ibadanland His Imperial Majesty Oba Saliu Adetunji, and Ogungunniso 1, couldn’t make to the party, but was ably represented by his Olori. She came with strong delegate led by Olubadan’s media aide, Mr. Adeola Oloko; Kabiyesi’ P.A, Mr. Yanju Adegboyega and others.

The major quality of a good leader is to inspire people to do that which they think they couldn’t do and that is what the Senator representing Oyo Central in the Upper Chamber and Laguna Olubadan of Ibadanland, Teslim Folarin represents. That is why people always rally round him wherever he goes. And Akin Alabi’s party wasn’t different; he came with a powerful entourage. The lovely wife, Chief (Mrs.) Angela Folarin complements her husband so well. She is an epitome of beauty and a simplicity personified. Despite the fact that she is not a Yoruba, she has studied and understood the culture perfectly well. Quess what? Angela went on her two knees to greet Chief (Mrs.) Bose Adedibu, wife of late grand commander of Ibadan politics, Alhaji Lamidi Adedibu.

ALHAJI OLAIDE OLADEJI, THE MR. FIX IT OF IBADAN

Though Olaide Oladeji is a top banker, but he is sociable and well connected. He is also an excellent host; he is so much good in connectivity and planning. He is known as ‘Mr. Fix it’ in Ibadan social establishment. He was on ground at Akin Alabi’s party, as he made sure his mentor, Senator Teslim Folarin’s entourage, as well as other guests, were taken care of. He came alongside his lovely wife, Alhaja Olaide.

AND THE CONSTITUTED AUTHORITY CAME IN FUNFARE

Trust the immediate past governor of Oyo State, Senator Isiaq Abiola Ajimobi; he is a show stopper any day any time. The ‘Constituted Authority’ as he is popularly called, as usual, walked majestically into the venue. He was welcomed to the party by Senator Teslim Folarin alongside the party loyalists. He joined Bose Adedibu and other party loyalists on the former Senate Leader’s table. They were all there to support their political son, Akin Alabi and his siblings, as they buried their late father.

WITH LOVE FROM HOUSE OF REPS

Apart from the that some honourable members of the House of Representatives attended the 3-day burial ceremony from the very first day till the end, Speaker of the House, RT. Honourable Femi Gbajabiamila made a surprise appearance too. He came late in the evening and his entrance into the party was quite grand. The honourables came in large number to support one of them, Hon. Akin Alabi, the Honourable representing Egbeda Federal Constituency and the Mogaji of Ajiwogbo Compond in Ibadan.

Apart from the two types of Ankara Aso-Ebi, which were said to be sold out, there was also Pink sequence lace with little tough of Pupple for top society women at the party. Over 100 society women wore the 35k lace Aso-Ebi. They all looked gorgeous and glamourous in their various shapes and styles.

SINA ALABI WAS THERE TOO.

The former TCTC Chairman, Hon. Sina Alabi is no doubt a politician of note, a businessman and a socialite per excellence. He is one of the Ibadan big men rocking the social scene. He made a new style statement at the party with his ligh Blue agbada guinea brocade and his white glasses. The fact that he is averagely tall and handsome is a plus for him. He was at the party alongside his beautiful wife.

BETWEEN LAMIDI AJADI AND OMOOKUORUN

Talk of powerful, rich big men who have been consistently dominating the social scene in Ibadan, then prominent tyre merchant and businessman, Alhaji Lamidi Ajadi and Alhaji Omo Okuorun names won’t be left out. They have been rocking the business and social scenes in Ibadan for decades and they are still very much active. The two were sighted sitting together alongside other prominent men at the party.

The best party vendors were engaged for the party and they were just too many. Some of them include Hot Plate Catering, Lanka Event who handled drinks aspect alongside Jolabim and others. Apart from the normal catering, special local delicacy, Amala was also available. The duo of Ashabi Alamala and the popular Inaustrait Canteen handled that aspect. God’s Favour Chef also did part of catering. King Sunny Ade was on band stand, while the talented D.J Sexy was on the wheel of steel. Dexterity did a brilliant job with the exclusive decoration.