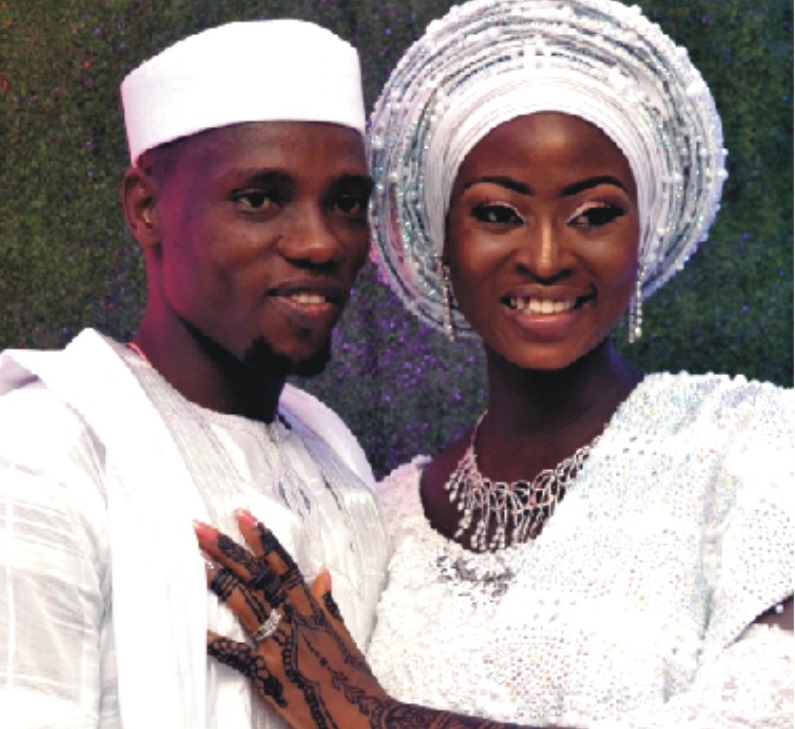 On Saturday July 14th, 2018  families, friends, captains of industries and well wishers gathered to witness the Nikkai ceremony of Bintu Omobolanle Yacub and Ismaila Olasunkanmi Carew. It was a 2-in-1 party as they had the naming ceremony for their child. The Vogue hall, an event center inside Railway compound, at Oyingbo Lagos, where the celebration took place was filled to capacity as there were also extensions outside it to accommodate invited guests.

City People’s FEMI FABUNMI was present at the event and now serves you gists from there.

The Nikkai  and Christening ceremony began with an opening prayer said by one of the clerics Sheik Jeje. He prayed for the lives of the love birds Yakub and Bintu saying they will live happily ever after together. He also prayed for journey mercies for invited guests who came from far and wide for the purpose of the occasion.

PRAYERS FOR THE COUPLE

The team of Islamic clerics on ground called out the couple and prayed fervently for them. Yakub and Bintu were asked to kneel and stretch forth their hands whilst the clerics pray on. Invited guests and relations of both partners also joined in praying for successful marital journey for the two of them.

MINISTRATION AND PIECES OF ADVICE BY ISLAMIC CLERICS

As soon as they were done with praying for the couple, Alfa Saheed started ministering and advising the couple at the same time. He asked them to always try and settle differences between them and try to ignore external interference except when it is very necessary.  He said 3rd party interference can affect a marriage negatively. He advised them to always seek the help of God before venturing into any project together.

ISLAMIC CLERICS WHO GRACED THE OCCASION

As soon as  Alfa Saheed was done ministering and advising the couple, their  baby was brought forward and she was christened Rashidat , Temitope Carew. Invited guests also stretch fort their hands to pray for the baby.

After the prayer sessions for baby Temitope, the cleric asked guests if they would like the baby to venture into politics and become a leader. Some guests chorused that she will become the president of the country, but the cleric disagreed and said the country is not ripe for a female president as of now saying maybe a Vice President is more realistic for baby Temitope.

HOW THE COUPLE MET

The groom Yakub intimated city people crew that he met Bintu when he went to do business at light event planning outfit where she works as a secretary. He said that their path always cross whenever he went there for business .One thing led to another and their relationship started and finally blossomed into marriage.

Female Invited guests wore green lace with dark black grey and gold head gear to match, whilst the male guests clad in white lace with black cap to match. The Aso Ebi that guests wore added colour to the event.

Bride’s Mum Alhaja Idayat and Hubby Alhaji Shonibare were very happy  seeing their daughter get married.    They were seen beaming with smiles all through the duration of the party.

GROOM’S MUM WAS UP AND DOING

The chief executive Officer of Party Needs Rentals and Event Planning Outfit, Alagomeji Yaba Lagos, Alhaja Kikelomo Carew who also doubles as Groom’s mum kept moving from one end of the hall to another ensuring that invited guests were properly taken care of at the party.

If one didn’t look carefully the groom could be mistaken for one of the guests or ushers. He moved freely from table to table ensuring that no guests were left unattended to. He ensured that guests at the occasion had a nice time.

Lagos based Disc Jockey, DJ Annex was on ground at the party and he thrilled guests with beautiful collections of local and international songs. Many of the invited guests were seen dancing and shaking their bodies to his songs.

Bintu and Yakub’s wedding and naming ceremony could be described as a contest between the youth and others in the society. Some persons who are of a particular age group perceived to be the couple’s friends  decided to steal the show by mounting the stage in the hall and dance beautifully together to DJ Annex’s churned out songs and it was to  the admiration of everyone. Apart from that, they also created a space for themselves within the hall where they wined and dined together

FOOD WAS ON POINT

All the vendors who served at the party really lived up to expectations. Muri spice served hot Amala with varieties of traditional soups .Fatmac catering service prepared Fried and Jollof rice. Amala on Point catering outfit was on ground with her workers to serve Amala and hot pounded Yam.

Security personnel from periscope security Lagos provided security at the event. They ensured the event was properly secured as their men were all over the event venue making sure no intruder spoilt the day’s fun.