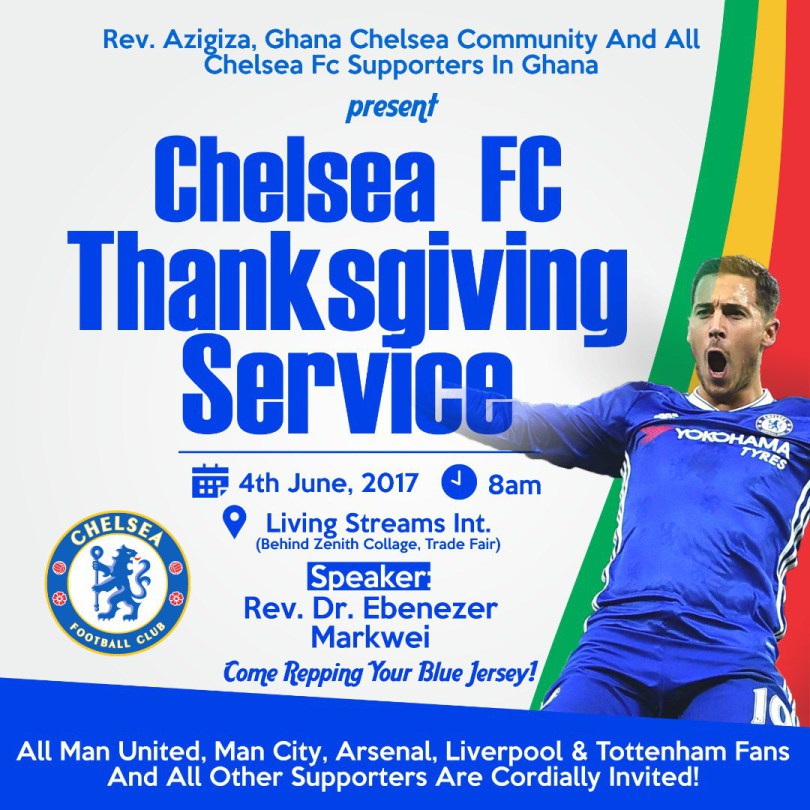 A pastor in Ghana is set to hold a Thanksgiving service in order to celebrate Chelsea football club after their premier league title win.

Chelsea FC fans in England have credited their performance to the tactical brilliance of Italian coach Antonio Conte and the skills of players such as Eden Hazard and N’golo Kante, they have also planned to revel in the success by participating in their title procession through the streets of London.

However, their Ghanaian counterparts have come up with a novel way to celebrate the title triumph by holding a thanksgiving church service on June 4 in Accra.

A flyer for the church service which comes off at the Living Streams International Church behind the La Trade Fair Centre urges all Chelsea fans to come to the venue wearing their jerseys.

It also invites fans of their rivals including Manchester United, Manchester City, Liverpool, Arsenal and Tottenham to join them at the church service.

The main speaker at the programme will be local preacher Reverend Dr Ebenezer Markwei and former DJ Reverend Azigiza Junior.

Pastor & All Chelsea Fans In Ghana To Hold Thanksgiving Service To Celebrate Chelsea After Title Win was last modified: May 20th, 2017 by Arinze Ago

7 Nigerian Pastors That Were Accused Of Adultery