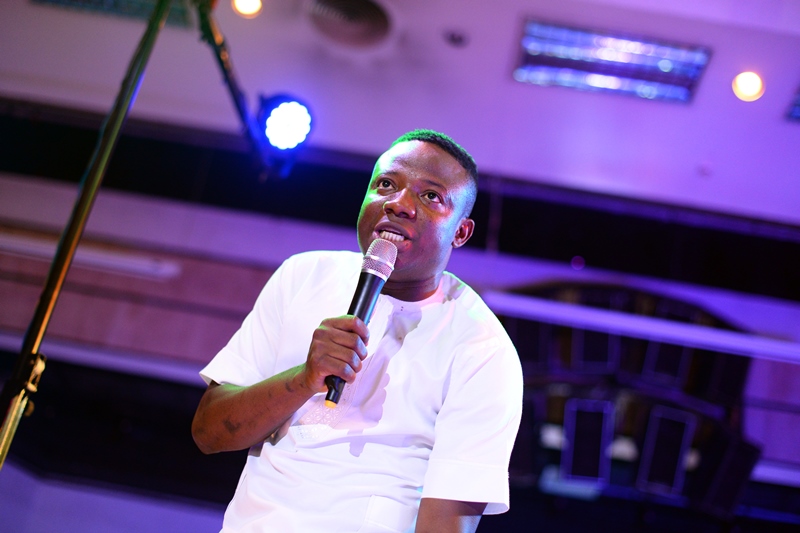 The recently concluded City People Music Awards 2017 which held two Sundays ago at the prestigious 10 Degrees Event Centre in Oregun Lagos saw a lot of celebrities gather to get honoured and celebrated. One of the categories that was keenly contested was the Comedian of

The Year category which saw the popular comedian, Bash emerge as the winner.
The Ace comedian whose real name is Bashiru Ahmed Adekunle will once again amuse guests with his incredibly exuberant performance at the 2nd edition of his annual comedy show, D’Good, D’Bash & D’Funny which will hold at Shell Hall, Muson Centre on Sunday, 10th of September 2016.

The comedian visited the City People Headquarters last week where he had an interview with City People Publisher, SEYE KEHINDE, and his Reporters DANIJI EMMANUEL and FEMI FABUNMI where he spoke about his comedy career and how many didn’t know he started out as a dancer. Read the interview for more exclusives.

Share with us how it’s been for you in the last few months.
It’s been nice and awesome, we have support from wonderful people and we thank God for that. We’ve been in the industry for quite some time, it’s been more than 15 years I’ve been doing Stand-up Comedy but I am not the outgoing type, I need to work on that so that people can start seeing me.

How did Comedy Start for you?

I started with Dance. I was arguably one of Nigeria’s best dancer for 3 years. Comedy started for me around 2000, 2001, I had a show, I used to be a boy with DJ Shina and I had a show in Ladoke Akintola University of Technology in 2001, the host was supposed to be Julius Agwu, before then I have been doing music, I had a group then where we had the likes of Helen Paul, 9ice, Reminisce, Jahbless, ID Cabasa, they’ve been part of the team.

So in 2001 we had a show, the MC did not show up and I used to be a talkative, so I picked up the Microphone and did the show and a week after the show, they called me from the same school to anchor another show and I can remember vividly, in 2001, 5000 Naira was my fee then.

On your music career, what’s Bash up to?
What I am doing is that I am currently in talks with a record label who would be handling my music and my skits so I would concentrate majorly on my Stand-up and Organization of shows. My album is coming out very soon; I am not in an hurry. I’ll be releasing a lot of musical videos after my show, D’Good, D’Bash and D’Funny on September 10 at the Muson Centre. After that, I’ll be dropping musical videos and skits and the people would be the one to critic and judge if I am good at what I am doing.

What informs your style of comedy?

I believe in planning. I follow the rule that says “Proper Planning Prevent Poor Performance”. My style of comedy, I started with Street, then I moved it up, I started with “Lagos” because I noticed most of my Colleagues are always saying they started with “Warri” and I’m like, we have a lot of issues happening here in Nigeria, so why Warri alone.

So I started with Lagos and started to crack jokes on the street boys, the market women and so on. And when the name became registered, I moved from been Bash to becoming “Bash De Cash” because I started doing corporate events, I moved from been a comedian talking about street scenes to been a Social Commentator.

If you notice my style of jokes now, you would notice that they are not jokes but things that are very funny, the humor part of any good story. I call myself the Social Commentator with Humor now. So any topic, I can pick it up, bring out the humor part of it and deliver, and we thank God that we are very spontaneous, and I always say we because it’s not just me, it me and my fans and without them, we won’t be here. So we thank God.

How do you balance Comedy and Music?

It’s a normal thing, I have mentors, I you are a good follower, you would be a good leader. My mentors, some of them are not Nigerians; one of them is Jamie Foxx, Will Smith. Will Smith is the first rapper to win a Grammy and he is a standup comedian, an actor and a musician. It’s in Nigeria people would say why are you doing all, outside Nigeria, people don’t just do one thing, they do other stuffs outside StandUp, like Kevin Hart is a comedian and an Actor making movies just like AY is doing now. It’s a natural thing for me.

What type of music do you do?
I call it Social Music. The reason I want to go into music is because I am really encouraged by 9ice. 9ice and Cabasa used to know me to be a singer back then and they advised me not to do music that I was already making money from comedy. So one day I was in 9ice House and they were playing a song and I did a freestyle on it and 9ice was like I’ve got the talent and I told him that while I am less busy I do record and I have recorded like 15 tracks and he was shocked and told me to bring them and I gave him 3 of the tracks which he listened to and he took the tracks to Sound Sultan who listened to it and was astonished when he heard that I was the one who sang them. ID Cabasa called me up one midnight and said I must do music. I had a show in Ibadan recently Peteru’s Club and I performed one of my tracks there and 90% of the ladies there had to ask me what I was doing in Comedy when I have got such musical talent.

What’s your strategy to stay long in the game?

I always tell people, the easiest way to make money is to do what you like or have passion for. I love music and dance and definitely that’s my strategy to stay long in the game.

Who are your role models, locally and internationally?
You’d be surprised that unlike my Comedy Role Models been international, most of my music role models are in Nigeria. Number 1, Barrister, I love Barrister and I know all his songs. Number 2 is K1 and Number 3 is Shina Akande, that’s for the Fuji Genre, with a touch of Adewale Ayuba.

In hip-hop, give it up for 2Baba, 9ice, Wande Coal, Harrysong. In Rap, M.I Abaga and Phyno. Why I love Phyno is because he stuck to his style of Rap, the traditional Rap, same with Reminisce. For the Female, I love Shola Allyson, Tope Alabi and Salawa Abeni. Internationally, I love Whitney Houston, I love Snoop Dogg, I am not a fan of Biggie, I’m a fan of Tupac and finally, I love Will Smith.