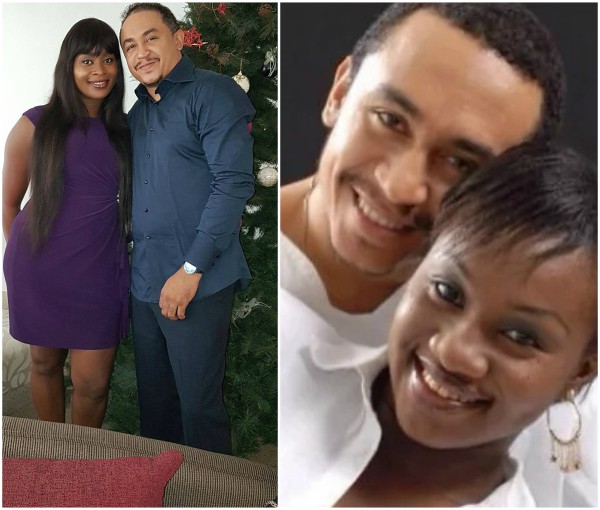 Talk of a controversial On Air Personality who has stood tall in the fight against injustice and ‘societal inbalances’ in Nigeria today and the name  Ifedayo Olarinde, popularly known as Daddy Freeze will readily come to mind. Freeze, is an On Air Personality on Cool FM, Lagos, Nigeria. He’s a halfcast; his father is a Romanian and he has a Nigerian mother.

It is no longer news that media personality, Daddy Freeze and his estranged wife, Opeyemi Olarinde had a messy split in 2014 after 15 years of marriage. Freeze who claimed Opeyemi was violent alleged that she inflicted injuries on him at the time. Shortly after they parted ways in 2015, there were rumours that Freeze and Benedicta were getting engaged.

Benedicta, is from Awka in Anambra State and a graduate of Analytical Chemistry, from the Rivers State University of Science and Technology. This ambitious young lady entrepreneur was at that time making waves in Port Harcourt with her brainchild confectionary company called Dictachi Foods. While growing up, she claimed to be fascinated by the science and technology… Now, she is doing well with her catering and event job in Lagos.

Both Freeze and Benedicta have not officially together, but we can authoritatively tell you that, they have been seen together at functions and events. On such occasions, they were always cuddling and kissing.

In December 2017, Benedicta released a video of herself and Freeze on Instagram. In the video, they were seen cuddling and kissing and below the video she wrote: I thank the Lord for this wonderful man. He is, indeed a blessing to me. He’s my pillar of support and my best friend. In another video, Freeze and Benedicta also cuddled and Freeze wrote below the video: Daddy and Mummy Freeze; without this woman’s love and support, I can’t function.  And  sometimes ago, Freeze was seen on Instagram with a new born babe, a baby delivered to him by his new partner, Benedicta. Few years back there were rumours that Freeze had left his wife of 15 years and mother of his two kids for a Port Harcourt-based woman. However, after a long silence, the On Air Personality took to his Instagram page to post some photographs of how his estranged wife brutalised him. He also accused her of infidelity.

He captioned one of the photographs thus: “Another incident when my ex tried to strangle me! Do you want more pictures? I can go on for weeks posting such pictures. It used to be like this, at least, twice every month. Yet, my Pastor advised me to stay and that divorce is a sin…..   After the separation, I realised that my life was far more important than the institution of marriage.

“Every moment spent with an abusive partner COULD BE YOUR LAST! Leave while you can! I have chosen not to speak up until now for my children’s sake. But when a woman believes she has been scorned because of a horrible past that was no fault of mine and transfers the aggression to me and is hell bent on destroying my very essence I must speak!

“I speak for every broken man, every battered man and every abused man, who is suffering endlessly and needlessly in the hands of a woman because of ‘marriage’ to gather the strength to speak now!

Below are some of the facts about the popular OAP, Freeze.

He was not born in Nigeria and his state of origin is Osun State, yet he invested many of his formative years in Ibadan. He went to International School, Ibadan and then the university of Ibadan where he finished and got his first degree in Sociology.

HIS CAREER’S PATH AS A BROADCASTER

Freeze is among the most effective professional in the media. He began his radio job at a young age with a short three-month job with Radio Galaxia in Romania, while on vacation. He later came back to Nigeria and also he signed up with BCOS Ibadan where he worked for 5 years prior to relocating to Cool FM in 2001.

Freeze has been in the broadcasting service for over 15 years. Talking on his broadcasting job he said: “It’s not a task any longer, it’s part of my life. Throughout the training course of his job, Freeze had been fortunate to have face-to-face met global acts such as Boyz 2 Males, Angie Rock, Akon, Brian McKnight, Sisquo, Joe, SWV, Brick and lace, Wycleff Jean, Caron Wheeler, Sean Paul and many more.

His feud with Nigeria’s Ace producer, Don Jazzy, when he spoke with Tonto Dikeh as well as made a declaration regarding a celeb that provided recharge cards on Twitter to obtain popularity. Don Jazzy took offence as he alleged that he was the person referred to.

This led to the trading of words on Twitter.

His current outburst against artiste, very important people as well as public figures have made him a record on social media sites as he constantly appears to have something questionable to claim concerning any trending subject. He has openly blown up artiste, Etcetera on Twitter for his constant string of short articles that were guided towards many stars as well as those in the show business.

Freeze has constantly been a guy of high preferences and also in an interview with Punch, he discussed the global brand name, Michael Kors calling it ‘razz’. He likewise pointed out that he had a collection of watches worth over 32 million naira. Many persons went to Facebook and twitter to oppose his viewpoint.

How You Can Adopt A Child In LAGOS Founder LITTLE SAINTS Orphanage, Rev. DELE GEORGE