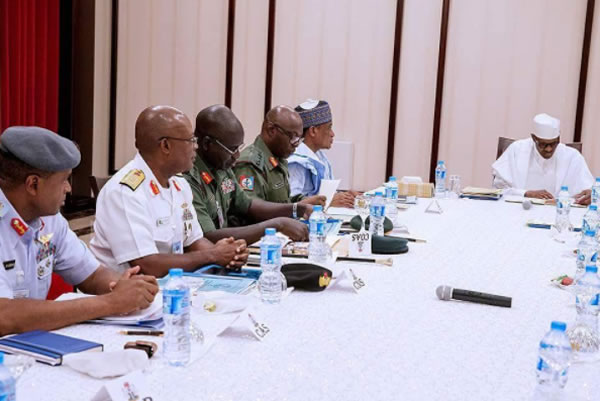 President Muhammadu Buhari is meeting with the service chiefs at the presidential villa, Abuja — about 24 hours after senators demanded their sack.

Some senators had called for the sack of the service chiefs over the frightening spate of insecurity in the country.

TheCable previously reported that the service chiefs are all due for retirement, having spent 35 years in service.

Speaking at the senate on Wednesday, Elisha Abbo, senator representing Adamawa north, said funding for the military is not the problem but its leadership.

“Going by this budget document from 2012 to 2019, the army has received over N4 trillion, funding is not the problem,” Abbo said.

“The military will tell you their vehicle is spoilt and they cannot move. Mr President should look inwards. Security chiefs have done their best, they should go.”

“The chief of army staff set up a university in his hometown, the chief of air staff too. Why all these universities? There is a need to effect a change in the leadership of service chiefs,” Yaroe said.

Enyinnaya Abaribe, senate minority leader and member of the Peoples Democratic Party (PDP), had asked the president to resign over the rising insecurity in the country.

The PDP also supported the call for Buhari’s resignation, saying the president lacks a solution to the challenge of insecurity in the country.