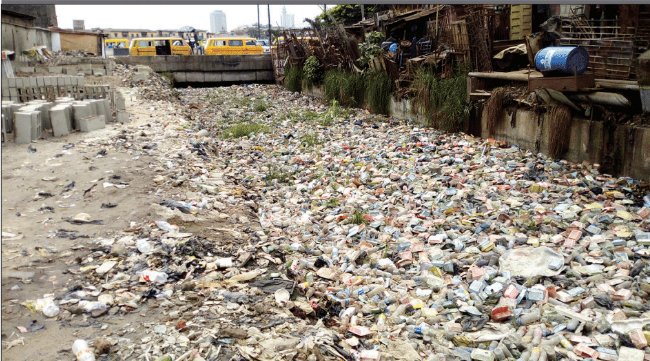 Lagos Waste Management Authority (LAWMA) has commenced an intensive clearing exercise to unclog the Adeniji Adele Road canal, while urging residents to think of making money from their recyclable items, instead of dumping them in canals.
The agency’s authorities said the exercise was in furtherance of the executive order on zero tolerance for reckless waste disposal, recently signed by Governor Babajide Sanwo-Olu.

“We embarked on this campaign pursuant to the executive order signed by His Excellency to pave way for a cleaner and healthier Lagos. This shows total commitment of the State Government to environmental sustainability.”

The agency stated further that the clearing exercise would be extended to other clogged drainage channels in the state, to ensure that no part of the metropolis was left behind in LAWMA’s quest to ensure a clean environment in the state.
“The clearing of the canal would be extended to other clogged canals in the state. The exercise will allow free flow of water and help mitigate the problem of flooding. We, therefore, appeal to residents to shun the habit of throwing their waste into canals and drains as this causes huge problems for the environment and people”, they stressed.

The authority observed that most of the waste cleared are recyclable materials and seize the opportunity to urge residents to think recycling, stressing that the act of sorting from source would encourage reduction of waste at the landfill sites, improve the economy while serving as a tool for youth empowerment by engaging them in meaningful ventures, adding that
residents would further be educated on the menace of plastic wastes like PET bottles which posed great dangers to the environment.

Residents commended LAWMA for the timely intervention and suggested that the exercise should be a continuous one, while also promising to join hands with the state government in its quest for a cleaner, healthier and sustainable environment.