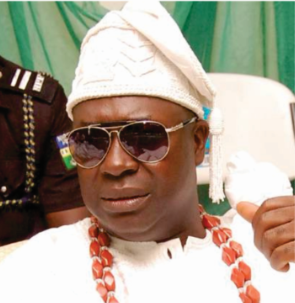 An Aromoko-Ekiti Prince and business mogul, Olusegun Aderemi, has dedicated a gigantic structure in his home town Aromoko-Ekiti. The house warming which was held on the 13th of August, 2017 was massively attended by royal fathers, family members clerics and well-wishers.

The mansion referred to as Atayero court is named after the family’s royalty slogan. Atayero Court is sitting comfortably on an acre of land and it also enjoys an impressive  topographic and aerial view. It boasts of 200 sitting capacity hall, a small size swimming pool, children’s playground and visitors’ apartment, a separate building different from the main one.

Giving his sermon, RT RV Rufus Adeleye Adepoju said that indigenes of Ekiti State should endeavour to emulate Prince Segun by coming home to replicate the same kind of project, saying many were born and brought-up in in this place and should always try to remember their source.

“Many were given birth to in this place, so they should endeavour to put up structures that would give the place a face lift” he said. He urged people of Aromoko-Ekiti to always be good ambassadors of the country, while also living a righteous life anywhere they find themselves.

The preacher of the day SP Pastor Adesanya Adegbamigbe, prayed for those who will occupy the house, he also blessed and cleansed the entire building.

Speaking at the ceremony, an elated Prince Olusegun Aderemi said that he felt good and gave glory to God.

“I give glory to God for sparing my life to start, finish and also witness the dedication of the building. It was a dream, the dream I had many years ago has been actualised”. He said. The wife of the immediate past King of Aromoko, Queen Mojitinuade, expressed her joy in seeing the massive edifice erected by a Prince of Aromoko-Ekiti, saying her joy knows no bound.

She posited that a project like this would propel more indigenes to trace their paths back home and give it a facelift.