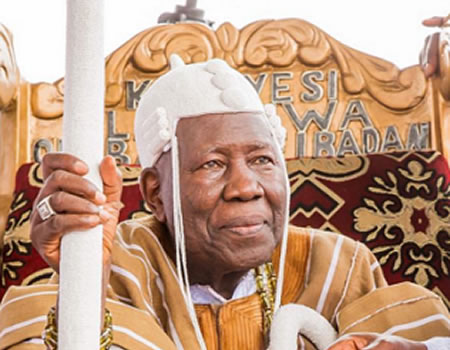 Olubadan of Ibadanland, Oba Saliu Adetunji, has described as untrue and unfounded, the statement credited to a group of Ibadan elders that he had consented to the chieftaincy review embarked upon by the Oyo State government.

Two Ibadan-based private radio stations, had quoted Ambassador Olu Sanu-led Ibadan Elders’ Forum who met with Olubadan as saying that Oba Adetunji had consented to the elevation of the chiefs to kingship status.

A statement signed by the Olubadan’s media director, Adeola Oloko, said: “The first-class traditional ruler who acknowledged receiving the elders at his Popoyemoja, Ibadan palace, last Thursday, noted that there was never a time that he was in the dark over the Ibadan chieftaincy issue as he did not say what the elders quoted him to have said.”

Oba Adetunji stated that the elders should not mislead Ibadan people into believing what he did not say, as what he said was that Governor Abiola Ajimobi, over whom they have come to plead, is his son and that he would not want a third party intervention over the matter.

“For the avoidance of doubt, my opposition to the elevation of high chiefs to kingship status without domain remains the same. I cannot see how I would bless the high chiefs who have refused to wait for their turn before stepping forward to take crowns from the government, contrary to our tradition and custom.

“The crown, which I wear, has its root from somewhere. I cannot bless a crown that has no root. You will recall that the same Ibadan Elders’ Forum stoutly opposed the former Governor Adebayo Alao-Akala’s move to elevate six Baales in their letter dated 24th April, 2009.

“On page 2 of that letter, entitled: ‘The composition of Oyo State Council of Obas and Chiefs.’ signed by Ambassador Olu Sanu and Onaolapo Ajibola, they stated: ‘The Ibadan chieftaincy system had worked for ages and ensured peace and stability in Ibadan land and the forum would therefore not want the government to tamper with the system in order not to create confusion and ill-feeling.”

Oba Adetunji, therefore, urged the Ibadan elders to stop contradicting themselves and creating confusion for peace and progress of Ibadan land.

In a related development, a group of clan heads (Mogajis) in Ibadan has pointed to anomalies in the recent review of the Olubadan chieftaincy declaration and coronation of 21 Ibadan Obas, asking the state government to revert decisions associated with the review and return to status quo.

The clan heads, under the platform of Integrity Youths of Ibadanland (IYI)/Council of Mogajis of Ibadan land, at a press conference, in Ibadan, on Tuesday, said the white paper that followed the Justice Akintunde Boade review report was tantamount to a distortion of the history, culture and monolithic tradition of Ibadanland.

Former deputy governor of Oyo State, Alhaji Hazeem Gbolarunmi, who spoke on behalf of the clan heads, numbering 15, said that the high chiefs promoted as obas could not exercise right of obaship because they had not been conferred authority over particular territories by their subjects.

Gbolarunmi, who is Mogaji of Olugbesan house, further said the Mogajis’ grievance also was that the high chiefs upgraded possessed no domain, palace, terming the state government’s decision as semblance of colonial structures creating warrant chiefs in Igbo land.