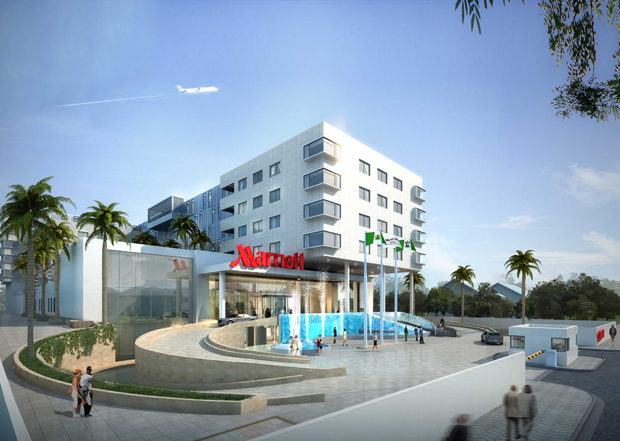 Have you heard about the new Marriott Hotel in Lagos located at 122 Joel Ogunnaike Street, Ikeja GRA? That is the new hotel where many international visitors and business travellers stay.

Finally, the much awaited opening of this 5 star hotel took place last Wednesday, amidst pomp and pageantry.

The Governor of Jigawa was there. Some former governors like Senator Ibikunle Amosun also came. He was there with his beautiful wife, Olufunsho.

It was an array of traditional rulers who looked colourful in their royal outfits. The Ooni of Ife, Oba Adeyeye Ogunwusi was there. Oba Saheed Elegushi was there with his beautiful olori Sekinat. The Oluwo of Iwoland stood out in his new royal outfit and crown. The Alara of Ilara kingdom, Oba Folarin Ogunsanwo stood tall and exuded sartorial elegance. The Olugbon of Orile Igbon, Oba Alao whose olori just delivered twins was the cynosure of all eyes.

The banquet Hall of the new Marriott Hotel was star-studded that night as the event which started at 6 pm ended at about 9 pm with a cocktail held at the poolside.

One person who felt so delighted at the successful outcome of the Grand Opening was the owner of the magnificent hotel Dr Taiwo Afolabi (MON), the Group Executive Vice-chairman of  SIFAX Group. He looked ever so handsome along with his beautiful wife, Folasade, who is a leading Lady of Style in Nigeria.

Prominent Nigerians Storm Opening of The New MARRIOTT Hotel in Ikeja GRA, Lagos was last modified: May 20th, 2021 by Reporter

The impact of Mrs Adebimpe Akinfolajimi in...