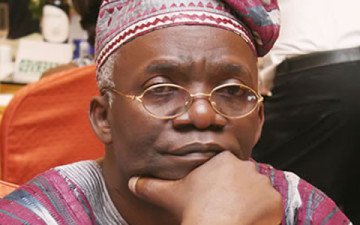 Can you believe it that radical Lagos Lawyer and Human Right activist, Mr. Femi Falana is 60? You had better believe it. He turned 60 two Sundays back. Up till now, many still can’t believe that FF, as he is fondly called, who is the father of Falz The Bad Guy has joined the Sexagenarian club. This is because the Ilawe-Ekiti-born SAN has been around for ever looking young. That is why when the news first broke on Sunday 20th May, 2018, it came as a big shock because many never thought Falana was that far gone in age.

There are those who just can’t believe that FF can ever grow old in their eyes. They still see him as that young radical lawyer and human right activist of those good old days,  who had and been at the forefront of many human right battles of the 80s, 90s along with late Dr. Beko Ransome Kuti, late Chief Gani Fawehinmi and many other radicals. He has also been a role model to many other radical lawyers.

But the truth is, FF, is 60. And City People Magazine went after him for a 60th birthday interview. On the evening of Monday 21st May, 2018, City People Publisher, SEYE KEHINDE spoke to him and found out that not much has changed about him. For instance, he is still as vibrant as he is. He is still youthful in his ways as he was 30 years ago. He is still playful, yet serious-minded. He still cracks his jokes that will make you fall off your chair. He still has his ways with words. But his  bushy hair and goatee beards are gone. He is now clean shaven. But he is still very radical in his views and ways.

He is also very committed to his life long cause of helping the masses of the people. Before this interview scheduled for 6pm that Monday evening began, I had to wait for him at the reception for him to attend to many ordinary Nigerians and even big men who kept trooping in to consult with him on human rights infringement issues.

So as the elderly and retired citizens came in, younger ones also came in. Femi Falana’s Chambers, which he co-runs with his  lovely wife, Funmi, is generally seen as the place where ordinary Nigerians can get help to get Justice, so it is a very busy place and FF and his team are ready to attend to them one, after the other. His wife also runs an anti-Domestic Violence NGO to help victims.

Born on May 20, 1958 at Ilawe, Ekiti,  Femi Falana attended St. Michael’s Primary School, Ilawe, between 1963 and 1968. When he concluded his primary school, he attended Sacred Heart Catholic Seminary between 1971 and 1975.  He later gained admission into the University of Ife (Obafemi Awolowo University), where he studied Law between 1977 and 1981. He was called to the bar a year after.

Having excelled in his law practice, Femi Falana became a Senior Advocate of Nigeria in 2012.

The distinctive thing about his practice is that Femi Falana is well known for human right activism.

He has been vocal, fighting for the cause of others. Even as a student  at the then University of Ife, (now Obafemi Awolowo University, OAU) he stood his ground against oppression from  successive military governments. He started his legal practice 36 years ago. Even as a youth corper, he handled the case of 7 University of Ibadan students who were arrested for protesting for their rights. He succeeded in securing their freedom and he became a human rights activist as early as 1983 when he took Bail for the students who had been unlawfully remanded in prison custody.

This incident led to his not being issued a Discharge Certificate by the NYSC after his one year mandatory national service. In July 2001, Falana petitioned the Justice Oputa led Human Rights Panel set up by the then Obasanjo administration over his withheld certificate but the NYSC denied that the certificate had been intentionally withheld and instead averred that it was Falana who had not requested for it. The certificate was subsequently released to him on live television at the commission’s sitting in 2001. The certificate was released 18 years after the completion of his service.

As part of his activism,  Falana times provides free legal service to the poor and disadvantaged Of course, his activism has landed him in detention several times. Below are excerpts of the first part of the interview with this great legal mind.

The morning you turned 60, how did you feel when you woke up? What went through your mind?

Many of my colleagues have since passed on. Some of them much older than myself. Some much younger than myself. There is also some form of regrets that with all the efforts we have made to reshape and reposition our country, we have been met with frustrations. So it was a feeling of elation and deep regrets.

When you viewed all of these what were the decisions that you took? What were your conclusions?

The major decision that I took was that I was going to rededicate the rest of my life to the herculean task of nation building and to rededicate myself to the struggle for the emancipation of our people. With the collapse of values in our country and the monitisation of politics I know it is going to be a herculean task, much more herculean than before. But it is not an insurmountable struggle.

Lets talk about the circumstances of  your birth. Where were you born? Where did you grow up?

I was born in Ilawe Ekiti, in the heart land of Ekiti State. I grew up in a rural environment. I was born into a polygamous setting. So, there were challenges from my birth. For people of my generation, it was compulsory that we had to go to school. And going to school when I was growing up was not a difficult venture. Coming from a strong Catholic family, I wanted to be a Reverend Father; I wanted to be a Catholic Priest.

I loved what the reverend fathers were doing in my community. They were involved in community development. They contributed to Education. They took care of the health of the people. I wanted to join the group. So, I opted to go to the seminary. When I wanted to go to the secondary school, I attended the Sacred Heart Seminary in Akure, Ondo State.

Whilst in the school I almost got expelled and fired because I had many critical questions and the Reverend Fathers thought I was too rebellious for the seminary. I narrowly escaped being expelled. I completed my secondary school education, but when it was time to go to the major seminary, I had a 2nd thought. Part of why I ran into problems at that time was that I had embraced Liberation Theology, which was very popular in Latin America at that time. It was clearly an alien concept here. So, I had a change of mind.

I entered Ife to read English Language, but during my 1st year in the University, we had the Alli Must Go crisis of 1978. That event changed my entire life. I was so motivated, so impressed by the public spirited role of late Chief Gani Fawehinmi. I was impressed with the way and manner he defended the students during that crisis and I decided to read Law.

I changed from English to Law and I have had no regrets.

Looking at your career since you were a student to when you set up your law firm, you have always thrown support for human rights, Rule of Law, defence of the defence less. How easy was it for you to decide that you were going in that direction?

I have been involved in activism from when I was a student. I was involved in student unionism on campus. We refocused the students union. We set up the National Association of Nigerian Students in December 1988. Since my undergraduate days I had decided that I was going to get involved in the task of nation building. From Ife, we led many protests to Lagos where you had the National Assembly then. We raised serious issues. Of course, I was also involved in Campus Journalism. Before our time, Campus Journalism was about soft press.

But we decided to change that, by talking of journalism of relevance, taking up the management of the university and our colleagues. At the end of our era, the Student Unionism in Ife became a positive agent of development. We made sure that students never broke or destroyed louvres and windows of buildings anytime we were protesting. That is why the students of Ife have never been asked to pay reparation anytime they go on strike because nobody would break a window or smash any door.

By the time I left Ife for Law school, I had no problem deciding where to specialise. It was the promotion and advancement of Human Rights and the Rule of Law.

Tell us about this your controversial case as a Youth Corper?

Oh yes. I remember, my 1st case as a Youth Corper landed me in trouble. I was then serving in the Oyo State Public Complaints Commission when I decided to defend about 7 students of the University of Ibadan, who were arrested during a crisis. I think it was during the Olaide-Must-Go crisis.

The alleged ring leaders were arrested and charged with attempted murder of the Vice Chancellor. I took up the defence of the students. The magistrate who had no jurisdiction to determine their matter, ordered that they be reminded in prison custody. I challenged the illegal detention of the students and I did so successfully and that was the 1st time a court in Nigeria pronounced that it was illegal and unconstitutional to take a criminal suspect to a court that has no jurisdiction. In other words, that was the 1st time that the illegality of the holden charge was pronounced upon by our court. For purportedly embarrassing the government, as a result of the victory recorded in that case, my discharge certificate was seized by the NYSC. I didn’t get my discharge certificate until about 18 years later and that was during the proceedings of the Oputa Panel in 2001.

(To be continued next week)

How Late SADIQ DABA Made Many Northerners...