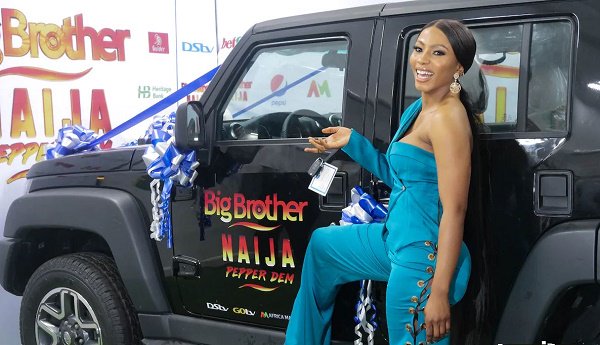 She was the last woman standing. Mercy Eke, a few days back defied all odds and emerged winner of the Big Brother Naija reality show, season 4 tagged Pepper Dem. This 26-year-old sexy lady is the first female winner of the show and she went home with the coveted 60 million ultimate prize. She has followed the footsteps of another lady, Karen Igho who went on to win Big brother Africa a few years back. Luck did not only shine on Mercy, she has a lot of fans who rooted passionately and voted massively for her, so she could emerge the winner. The lady who had an interesting life before she went into the big brother house had many things working for her win. She is a video vixen and a businesswoman from Imo State. Popularly called Lamborghini or Queen of Highlights, her 99 stay in the big brother house was worth it. Her interaction in the house and her character were some of the things that coasted her to victory. Her closest allies in Big Brother House were Diane and Ike while Ike remains her biggest crush. Born on September 1993, she is the first-ever female winner of BBNAIJA and first-ever joint Head of House (HOH) with fellow Housemate, Ike. She was also the first-ever joint diary session with Biggie. She emerged winner of the 2019 BBNaija 2019 Season with 41.77% votes after four attempts. For the emerging winner of the show, Mercy went home with a cheque of N30m. She also received various gifts and incentives valued at N30m. They include an all-expense-paid trip to Dubai for two, a Sport Utility Vehicle from Innoson Motors, a Scanfrost electronic makeover, a year supply of Pepsi Cola, one year supply of Munch It and Indomie noodles and VIP tickets to watch the European Champions League final. For Mercy, her life is now on a roller coaster, but coasting to victory and walking home with the grand price, did it come easy? No, Mercy fought the fight, part of what also helped her was her personality. She was loved by many of her fans especially celebrities who campaigned vigorously for her. Her video vixen job before she came into the house was also another plus. She was already known in the showbiz industry. Apart from the fact that she was the last lady standing which made her votes skyrocketed mostly from women all over Nigeria, she is very intelligent and all her tasks in the house most times she won. Did we mention her killer shape? It is one of its kind and she flaunts it the way she wants. The fact that she was kept in the house till the finals also got her a lot of support. A lover of life who does what pleases her and relates to everyone she is also a fashion buff whose outfits trigger opinions from many fans. Another high point for Mercy which made her popular was her liaison with a fellow housemate, Ike. She never shied away from the fact that she has a soft spot for Ike which made the duo more popular.

Barely 48 hours after winning BBNaija season 4 tagged Pepper Dem, Mercy Eke says her love affair with Ike is more than the BBNaija house romance.”What I share with Ike is more than BBNaija. It’s bigger,” she said. Responding to questions during a press briefing on Tuesday, October 8, 2019, the video vixen revealed her true feelings towards fellow housemate, Ike. Speaking further, Mercy stressed that the lowest moment in the house was when Ike was evicted in the 13th week after spending a total of 92 days in the BBNaija Pepper Dem House.

“ My lowest moment in the BBNaija House was when Ike was evicted and my highest moment was when I was announced the winner of BBNaija 2019 Pepper Dem,” Mercy stated. She was the last female standing amongst the last five housemates and she went on to emerge the winner of the reality TV show after spending a total of 99 days in the house. Another high point for Mercy was her brawl with Tacha which made big brother disqualify Tacha. The fight between the duo sent many tongues wagging as there was massive jubilation as Tacha was disqualified from the show. On the fight with her BBNaija housemate, Tacha, which led to the disqualification of the latter, Mercy said she still maintains a friendship with Tacha.”I still maintain my friendship with Tacha whatever happens; she has reached out to me. People should know that friends do fight occasionally, so what happened in the house is a reflection of us.”People will start seeing us together afterwards, we are still friends. Mercy says tattoos on her body were important as they were symbols of her desire to achieve her dreams.

Mercy, a fashion enthusiast who says she will love to open a fashion brand soon disclosed this while speaking with the News Agency of Nigeria (NAN) on the sidelines of her presentation to the journalists. Mercy, who did not hide her passion for having tattoos, said she has lost count of the numbers of tattoo on her body, adding that she only has flowers and butterfly imprinted on her skin.”I love tattoos and I have many of them. I can’t tell you the number till I count them; I only have flowers and butterfly tattoos on. “The tattoos are an indication that I can fly to a height without limit and also depict that everyone has wings to fly to any place that is right.

“I love fashion a lot and I make sure that I am comfortable with what I wear. I have different clothes for different occasions which determine what I wear. “I have a fashion line and a luxury line. I called it luxury not because they are that expensive but because it looks expensive. We can dress well and look luxurious without spending much money,” she said. The BBNaija Pepper Dem edition is the second to be filmed in Nigeria.

READ ALSO: HOW I MOVED FROM BEING A BANKER TO BECOME A POLITICIAN – KOSOFE LG BOSS, HON. AFOLABI SOFOLA

How I Moved From Being A Banker To Become A Politician – KOSOFE LG Boss, Hon. AFOLABI SOFOLA

The Story Of My Rumoured Marriage To Pres. BUHARI – SADIYA UMAR FAROUK Explains