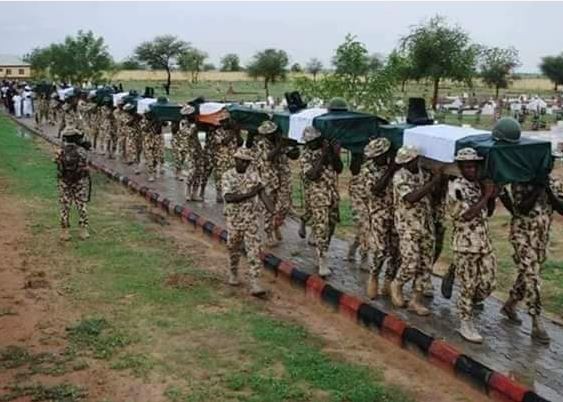 Over 1,000 soldiers killed on the battlefront in the fight against insurgency were secretly buried in Maiduguri, Borno state, according to a report by The Wall Street Journal.

Quoting military sources, the newspaper said the number of soldiers buried in that manner could be higher than the figure.

It said on the eve of President Muhammadu Buhari’s visit to Borno in November, army commanders secretly moved corpses of soldiers from a morgue to unmarked graves.

“When President Buhari visited the Maiduguri base in November, commanders rushed to bury bodies that had collected at the morgue from the recent attack on the base in Metele and several others, according to several soldiers at the base,” the report read.

According to Wall Street Journal, this is the fence of the secret burial ground

“They moved the bodies from the morgue into the unmarked graves under cover of darkness.”

A soldier was quoted as saying: “We could see the headlamps and the torches of the engineering division digging the graves.”

The report said as the commanders prepared the base for the president’s arrival, they also drafted in additional medical staff to treat the dozens of wounded soldiers in the base’s hospital wards.

It said as soldiers tried to register complaints about their conditions when Buhari addressed them, the president pledged to do everything within his powers to continue empowering them.

The military authorities are reportedly trying to expand the secret graveyard.

“As the secret cemetery at the Maimalari barracks grows, the military has expanded the site into neighboring fields,” the report read.

Sarah James, a 50-year-old farmer, was quoted as saying: “The farmland has been fenced off so they can bury the forces.”

Journalists could not reach Sagir Musa, army spokesman, for reaction as of the time of this report. He neither answered calls nor replied a text message sent.

How I Survived My Marriage Break Up...