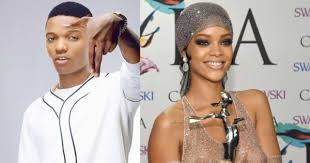 Superstar singer, Rihanna has given Wizkid’s collaboration with DJ Spinall a musical ‘leg up’

She shared a post on Instagram to announce that she had become the first female artiste to have over 2 billion worldwide streams on Apple Music.

The post, which showed a video clip of four girls dancing to ‘Nowo’ by Wizkid and DJ Spinall, was intended to convey the level of her excitement at the new feat.

“When I found out that I was the first female artiste to cross 2 billion worldwide streams on Apple Music! God is too lit,” the ‘Stay’ singer wrote her caption.

Her post is seen as an endorsement of the Wizkid-DJ Spinall ‘Nowo’ which recently surged past one million views on YouTube.

The collaboration was released less than two weeks ago.