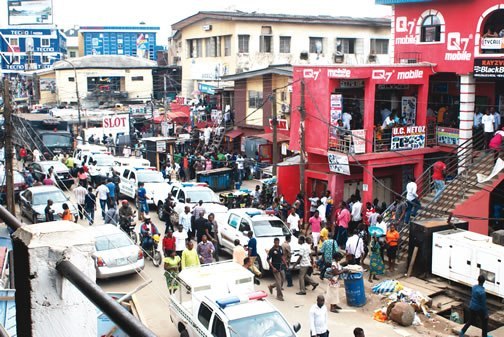 •Changes From Phones Into Hotel Business

Several years back, West African largest market place for information technology products, otherwise known Computer Village in Ikeja, Lagos witnessed one of the most daring attacks by men ox the underworld. It was a robbery incident that shook the market. Even today, the effects of that incident remain fresh in the minds of a lot of top dealers. Several security measures taken at the village today is as a result of that incident.

The unpleasant memories of that fateful day played back in some dealers’ minds last week when some shops around the village were robbed during this lockdown as a result of the spread of the very contagious Covid-19 causing coronavirus. Some shops were ransacked and other almost emptied as the owners observed the lockdown.

On that fateful day about ten years ago, several dare-devil  robbers stormed the Ikeja Computer Village with buses in the dead of the night and operated with impunity for about four hours, shooting sporadically. They ransacked several shops and carted away phones and computers valued at hundreds of millions of naira. However, two top dealers, Dallas and Capitol bore the brunt of the robbery as both shops were total emptied of their goods.

Dallas Computers had just restocked its inventory, while Capitol Phones was also restocking. Apart from this, both shops had a lot of cash in their offices as they were planning a major deal the next day. This was at a time before the prevalence of online cash transfers and transactions. These dealers were so desolate when they discovered what happened to their businesses the mroning after.

What was most remarkable about the incident was that at the time, both Dallas and Capitol were some of the biggest dealers in the Village. They had the largest inventories and were worth a lot of money. However, the robbery almost instantly turned them to paupers. Other dealers had to rally round to try and help them.  The umbrella body at the village, Computer and Allied Products Dealers Association of Nigeria (CAPDAN) also had to officially offer assistance to those affected dealers.

The result of the collective and individual efforts at the village to help uplift Dallas and Capitol resulted in generous donations and loans to the dealers. However, while Dallas used the help he received to continue at the village, Capitol was so traumatized that he didn’t come back to the shop to continue his phone business. This was a dealer that was as big as Slot Phones at that time.

Unknown to many, Capitol has reemerged big in the business circles but as a hotelier. Hence, he made use of the donations to go into hotel business. He is currently running one of the most upscale hotels close to the Dopemu area in Lagos. Just like he distinguished himself in the computer village those days and made his name very popular before the robbery incident, Capitol has been making efforts to distinguish his hotel business. The façade of his hotel is very appealing as well as remarkable and even that alone is attracting a lot of customers. He already has another outlet and even opening up more outlets.

He has been having a lot of patronage at the hotel and thanks to his popularity at the Ikeja Computer Village; the hotel is the favourite of Computer Village dealers. Most of them go there to relax almost every day after the day’s work.  It has become a meeting place of some sort for them.  He has ensured that despite his exit from the village as a result of the trauma and loss he suffered, he has remained close to his former colleagues. In fact, his name is still mentioned in the village where his popularity has been shored up by his hotel business.

READ ALSO: WHY I AM THE BEST SKINCARE DOCTOR IN NIGERIA TODAY – FIFI THE MOON