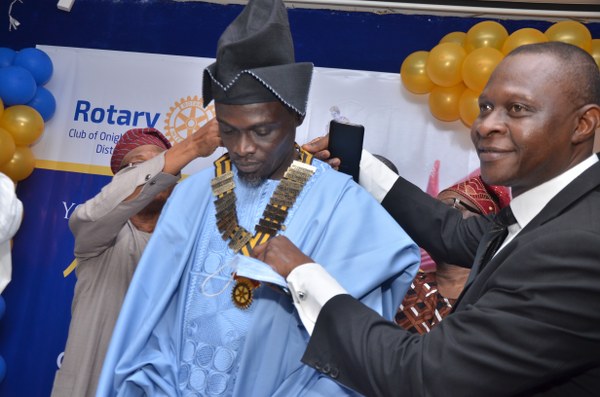 Saturday 30th of October, 2021 was a great day for members of the Rotary Club of Onigbongbo. It was the day Rotarian Adebusuyi Oluseyi Adetunji was inaugurated as the 40th president of the international club of high reputation.

The ceremony was an investiture and fundraising, all to mark the new administration which came on board in August 2021. It was held at the Rotary Centre located at 8, Ladoke Akintola Street, GRA in Ikeja, Lagos.

The Rotary Club of Onigbongbo is a very vibrant society with lots of track records of humanitarian activities. It joined the membership of Rotary International in 1982 with the objective to serve to change lives.

The ceremony was well attended by major stakeholders of the club amidst other invited guests, lovers and well wishers. Notable among them are Rotarian Remi Bello, District Governor D9110 and Host of the Day; Past District Governor Dr. Kamoru Omotosho, the chairman of day; Past District Governor Kola Sodipo, the Guest Speaker; Dr. Akinade Akanmu Ogunbiyi (Chairman Mutual Group), the Special Guest of Honour; HRH Oba Olusegun Adeyemi (Agasa of Onigbongbo Kingdom) able represented by 2 high chiefs: Chief Ganiu Shoda and Chief Olukosi. Also present at the event were Chief Ayodele Gbadebo Sangosanya popularly known as ‘The Boy’, Father of the Day. He came in company of his loving wife.

The transition went smoothly as it was done in the presence of past Presidents and past District Governors of the club. The exercise was a remarkable and historic moment as Rotarian Prince Adebowale Aderotoye finally handed over the baton of leader to the new president, Rotarian Adebusuyi Oluseyi Adetunji.

The new president during his inauguration speech affirmed that the club is built on the foundations of service to humanity. He said that it has fuelled their desire to effect change in lives. He however called on members, well wishers and people of good minds to support his administration in achieving their goals through numerous projects.

“We have a key/star project under Health which is the Irawo Health Centre for which we have gotten approval from the Lagos state government. We have secured land and have also done the architectural drawings of the project. “

He however appreciated the Investiture Committee led by Rotarian Salau Rasaq for putting forth a befitting event in his honour. He also thanked members for their unwavering support.