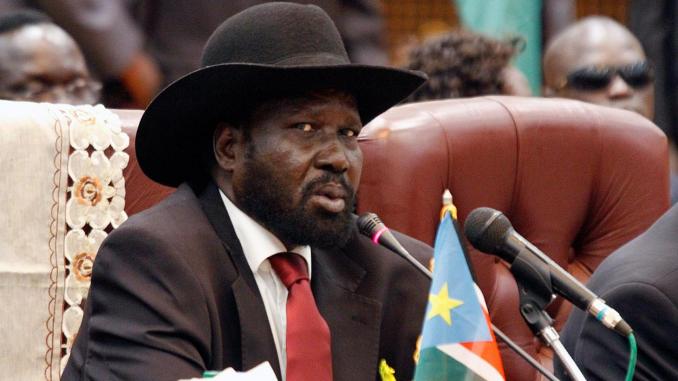 South Sudan’s incumbent president Salva Kiir’s government is facing underscoring mounting resistance from a disatisfied retired army general who quit his position last month and announced on Monday that he had formed a new anti-government rebel group.
Lieutenant General Thomas Cirillo Swaka, formerly deputy head of logistics, resigned after he accused Kiir of turning the country’s military into a “tribal army.”
The military, police and other security branches, he said, heavily recruited from among the Dinka, Kiir’s tribe.
Swaka was one of three top military officials who quit in February amid accusations of tribalism, nepotism, corruption and other abuses levelled against Kiir’s government.
In a statement on Monday, Swaka said his new rebel group, The National Salvation Front (NSF) “is convinced that to restore sanity and normalcy in our country, Kiir must go; he must vacate office.”
NSF would “fight to eradicate the malady that has badly tarnished the image of South Sudan,” he said.
Oil producing South Sudan, Africa’s youngest nation, was plunged into its first war in 2013 after Kiir sacked his then deputy and political rival, Riek Machar.
An ensuing two-year conflict was ended by a peace pact in 2015 and Machar, who had left the capital Juba at the start of the war, returned in April last year and was handed the same position.
Festering tensions between the two men, who hail from rival tribes, exploded into military confrontation again in Juba in July, kicking off the latest wave of fighting that has spread to several parts of the country since.
Machar now lives in South Africa after fleeing South Sudan at the start of the latest conflict.
The rebel group will be a new source of instability in a country where escalating violence has already uprooted an estimated 3 million people, devastated the agriculture sector and the throttled the broader economy.
Famine has been declared in parts of the country.
South Sudan’s military spokesman, Brig-Gen Lul Ruai Koang, told Reuters he had no immediate comment on the formation of the new rebel group and needed time to read Swaka’s statement.
In the document Swaka said an “above-the-law culture and mentality” prevailed among top officials in the military and blamed that for rampant crime, including robberies, rapes, embezzlement of public funds.