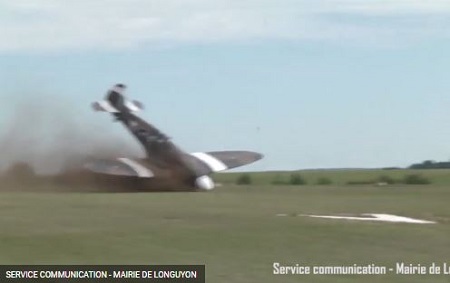 A small plane trying to takeoff has ended up nosediving into the ground in front of many stunned observers.

A video has shown the terrifying moment a Spitfire aircraft flips and crashes in front of terrified onlookers.
According to The Sun UK, the incident occurred during an airshow in northern France.
The WWII plane can be seen preparing to takeoff when its propeller hits the ground, sending the aircraft crashing into the ground in a cloud of dust at the Longuyon-Villette show.
One young woman was reportedly injured when the propeller splintered and flew through the air.
The pilot was injured in the crash, with the plane left upside down after the terrifying crash. He was rushed to hospital.
The video shows people rushing to the scene to help the pilot, trying to lift the flipped aircraft up.
He is then dragged from the cockpit as authorities hose down the damaged craft. His condition is unknown.
People who watched the video have since spoken of their relief that the pilot managed to escape the crash with his life.
See the Shocking Moment a Plane Flipped and Nosedived During Takeoff (Video) was last modified: June 12th, 2017 by Arinze Ago